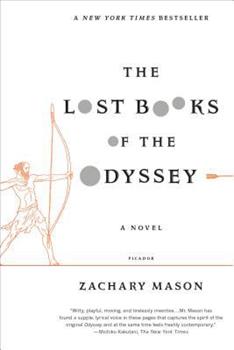 The Lost Books of the Odyssey

Wish I'd Written It

Published by Thriftbooks.com User , 11 years ago
Rarely does a book come along that is so engaging and so impressive that I wish I'd written it. The Lost Books of the Odyssey is one of those books. I have read and taught The Odyssey every year for the last 10 years, and my students and I never get tired or bored with the text as we do with so many others. When I discovered Zachary Mason's beautiful "followup" (for lack of a better term and since novel is a complete misnomer), I approached it with trepidation. I had found Kazantzakis's Modern Sequel to be worth more effort than the payoff (though Borges' and Calvino's followups were astoundingly good). But Mason came through and how!!! Each stand alone story is a marvelously constructed "what if", "this is the reality", or "then next" tale that explores all the ins and outs of The Odyssey. Mason does an amazing job at imaginatively constructing or reconstructing the central themes and/or characters from the original. They can be read on their own, in conjunction with The Odyssey, or as a loosely connected series. However you read them, you will love them and be amazed at their lucidity and ability to be both beautiful and thought-provoking. I wish I'd written this book.

Published by Thriftbooks.com User , 13 years ago
When the author gave his first reading of this book in New York he spoke about the book in clinical terms; its use of mathematical principles, the book as a study of recursion. But this book could not be less clinical. Though the tale is told in vignettes, each offers a different window into a sliver of the human condition with all its pain and drama and the emotions that motivate a human life. A beautiful treatment not just of Odysseus, but also of Homer's other characters, the novel fleshes out these iconic figures so that they can be touched and tasted and felt. In the Jewish tradition there is the idea of writing midrash -- stories that explain the tales from the bible by filling in the human connections between the lines. Mr. Mason has succeeded in writing very believable midrash on the Homeric epics which illuminate the text by giving us further angles by which to view.

Published by Thriftbooks.com User , 13 years ago
For those of us who come to novels expecting something more than a novel, who want graceful prose and intellectual rigor, who want to come away feeling as though we've discovered a world that is new and yet reminds us of the fictional worlds we love best, for those of us who are nearly always disappointed, Zachary Mason's Lost Books is an exception. His sentences are lithe and muscular, and his project is large -- he will make you return to the Odyssey to be sure you haven't remembered it incorrectly, and, perhaps most astonishingly, he will change the way you remember the Odyssey. I have long believed that, in Eliot's words, "a new work of art ... is something that happens simultaneously to all the works of art which preceded it," but it's been a long time since I watched a contemporary author do this with such grace. In addition to its austere, sometimes poetic beauty, in addition to the play with text and form and time, Lost Books is that rare synthesis of big ideas and small, gorgeous moments. Put Lost Books on the shelf beside Borges, Calvino and Homer. It merits rereading and rereading.

Published by Thriftbooks.com User , 14 years ago
I was privileged to see an early draft of Zachary Mason's Lost Books of the Odyssey, and I am delighted that this multi-talented young writer / scientist / athlete has found a publisher for the full, prize-winnning version. Fans of Jorge Luis Borges will find much to savor here, as will devotees of Neil Gaiman: Mason effortlessly blends the intricately imagined settings of the former with the pensive chill of the latter, to fresh and sometimes startling effect. I'll skip the hyperbole and superlatives that surround every notable fiction debut nowadays, and suggest that if you are a fan of the original, are hungry for skillful, soulful writing, or just looking for a good read, buy the Lost Books.
Copyright © 2022 Thriftbooks.com Terms of Use | Privacy Policy | Do Not Sell My Personal Information | Accessibility Statement
ThriftBooks® and the ThriftBooks® logo are registered trademarks of Thrift Books Global, LLC