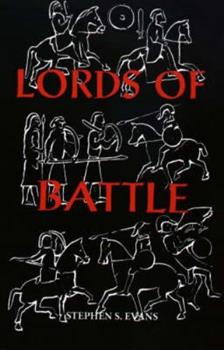 The Lords of Battle: Image and Reality of the Comitatus in Dark-Age Britain

The Lords of Battle examines the image of the comitatus, or warband, as it is portrayed in literary and historical sources from Britain's early medieval period, attempting to determine the extent to which it reflectsan historical reality. Through an extensive use of a variety of source material, literary, historical, and archaeological, the book investigates both the structure of the warband, and the practices and institutions which supported it.After...

Ideas and Concepts based on sound methodolgy

Published by Thriftbooks.com User , 17 years ago
As a heathen this work is a must.. as someone interested in Heroic Age Britain this an even bigger must.Evans work is nothing groundbreaking, but it is an excellent foundation to understanding the ideas and concepts of the Folc who lived during this age. I would actually recommend this work over most "Heathen" focused works.Though Evans doesnt really touch on Heroic age religion he spells out the ACTUAL culture of the ruling elite of the time.By understanding their social norms and everyday concepts one gets a much broader understanding of Heathen religious rites.

Published by Thriftbooks.com User , 18 years ago
In this fascinating book, author Stephen S. Evans looks at the reality of the comitatus in Dark Age Britain. The comitatus was the warband that the Dark Age leaders, Celtic and Anglo-Saxon surrounded himself with, and based his power upon. This book looks at Dark Age Britain, covering everything from its historical background, through the social and military organization of its tribes and states, and on to its economic supports. This is a great book, one that I cannot say enough about. The author does a great job of bringing Dark Age Britain to life, and explaining how it worked. If you are interested in this fascinating time and place, then you simply MUST read this book. It's great!

Published by Thriftbooks.com User , 19 years ago
The most insightful thing about this volume is the author's comparison of both the Anglo-Saxon and their British opponents' views on the comitatus - the war band of heroic Dark Age Britain. Usually, authors prefer to focus on the differences between these two ethnic groups rather than their similarities. Most of the evidence in the book comes from the heroic poetry from Beowulf for the Anglo-Saxons and the Godiddin for the British. Individual chapters focus on social structure, military organization, poets, the hall, and more. A good little book and a quick read.

Published by Thriftbooks.com User , 21 years ago
This small book is an interesting look at warbands in early Britain. Most of the evidence refelects Anglo-Saxon warbands, but Welsh warrior culture is also examined where possible. Of course quite a bit of evidence comes from literary sources, particularly the heroic poetry, but where possible archaeology is consulted as well. My only complaint is that the paperback I received was not well-bound, and even with gentle handling I soon had a whole section where the glue popped loose from the spine. This is an excellent companion book to go with Michael Cherniss' "Ingeld and Christ" for those interested in the warrior culture of early Northern Europe.
Trustpilot
Copyright © 2022 Thriftbooks.com Terms of Use | Privacy Policy | Do Not Sell or Share My Personal Information | Accessibility Statement
ThriftBooks® and the ThriftBooks® logo are registered trademarks of Thrift Books Global, LLC