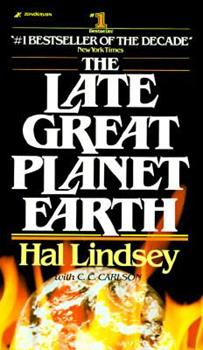 The Bible has much to tell about the imminent future and this blockbuster reveals all the signs, seen in today's society, that foreshadow the return of Jesus Christ.

Published by Thriftbooks.com User , 14 years ago
I read this work years ago. I avoid evangelicals, interpretations and opinion/agenda driven authors/books. Hal Lindsy does a fantastic job of concisely assembling and comparing scattered Christian bible prophetic references to the "end times". He draws attention to the parallels between Old and New Testament prophecies, illucidates some accepted historical data and draws conclusions without demanding that the reader assume his are the best or last words on the matter. Very informative book which avoids coming off as preachy.

Boy have some reviewers got it wrong!

Published by Thriftbooks.com User , 14 years ago
This is a fantastic book and a good starting place for more study! (look up the OmegaLetter.com or HalLindsey.com) It was written 30 or so years ago, so true, there are some dated spots (like the USSR is no longer here--but Russia still is!) However, the prophesies it explains are still true--and always will be. Every single prophesy about the first coming of Christ was 100% fulfilled. There is nothing in this book to provoke fear, other than fear if you reject Christ and you are left behind! All these prophesies are for knowledge which is power over fear! The Bible says: "God does not give the spirit of fear, but of power, and of love, and of a sound mind." Many people want to explain away the prophesies as "not literal". That is completely false. Anything that is not literal in the Bible says so plainly. Jesus tells us when he is speaking in a parable for instance. The argument that the Rapture or any of the other end time prophesies are "relatively recent" is easily explained. A good portion of the end-time prophesies are from Daniel, and Daniel was told by God that his book would be closed until the end time, and then it would be opened, and Jesus said that the generation that sees these things come to pass (Israel being a nation again and the Jews being drawn back from the four corners of the world) would not pass away until everything is fulfilled. That time is now. The people alive in 1948 (or perhaps 1967 when Jerusalem was in Jewish hands again), will not pass away until all the Bible prophesies about the End Times are fulfilled. No one but God knows the exact date the Rapture (and the final 7 years) will happen--but we can know the generation it will happen in. And you know what? If I, or Hal Lindsey are wrong about the Rapture, it's not going to hurt us at all. But if you are wrong, then you will discover it to your peril... The Bible says when you see all these things coming to pass to look up! For your redemtion draws near...!

Complete for its time.

Published by Thriftbooks.com User , 25 years ago
This book really revived the prophetic teachings. It vividly explains how the 7 churches in the biblical book of the Revelation is a picture of the whole church-age in 7 stages. I found it to be excellent and easy reading. History buffs should love this to as it gave future news in advance. He has a new book out in a novel form entitled, "Blood Moon" taken from the words of Jesus in Matthew 24
Trustpilot
Copyright © 2022 Thriftbooks.com Terms of Use | Privacy Policy | Do Not Sell My Personal Information | Cookie Preferences | Accessibility Statement
ThriftBooks® and the ThriftBooks® logo are registered trademarks of Thrift Books Global, LLC