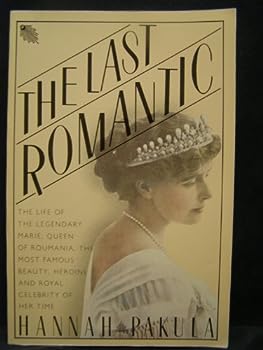 The Last Romantic: A Biography of Queen Marie of Roumania

Queen Marie of Roumania was one of the most fascinating crowned heads of Europe and one of the most extraordinary and independent women of our century. The granddaughter of Queen Victoria and Tzar... This description may be from another edition of this product.

Published by Thriftbooks.com User , 12 years ago
My wife is a big reader of historical fiction, whereas I would not touch the stuff (although I can't complain about "The Killer Angels" in light of the "Gettysberg" movie). I bought this book for my wife, who is a very, very smart woman, beacause she asked some questions about Marie. Wifey must have come across her in a book regarding Queen Victoria & her mucho progeny. The wife loved the book so much, that when I told her there was a chapter in a book I have on Versailles (1919) about Romania & how it more than doubled its size, she insisted on reading the chapter. Any book that can get my wife to read even a chapter of a relatively hard-core history book gets a 5 star tribute.

Published by Thriftbooks.com User , 12 years ago
This is a very interesting work on Marie, Queen of Romania. The main focus is on where she fit into the social whirl to inclunde the international diplomatic circuit of the era between the wars. Hannah Pakula wrote this book about 25 years ago so there are some perspectives that might be useful for the current reader (communism no longer exists in Eastern Europe). However in terms of accessible books on famous people in Romanian history, this book is probably in the top ten. The book chronicles Marie's journey from Queen Victoria's granddaughter to international power broker in the Balkans. It is worth noting that Pakula seems to specialize in books about women who are married to famous men who eventually come into their own due to their own qualities (Victoria, mother of Emperor Frederick of Germany and Madame Chaing Kai Sheck). Where the book might have been improved would have been more on some of the political figures who interacted with Marie. The book did send me off to Wikipedia to look up Marthe Bibesco, probably aone of the world's most fascinating women of all time, the two Bratianus, father and son who dominated Romanian politics for sixty years, Prince Stirbey, who was always around when Marie needed him. The book would have been better if it focused on Romanian affairs and Marie's relationship to them rather than the various comings and goings of the romantic frustrations fo the various royal houses between the 1890s-1930s. For all its shortcomings this is an interesting book dealing with a figure who now is apparently coming into her own in Romania and is remembered now for her diplomatic offensive at the Vedrsailles Conference which gained Romania the four provinces that had eluded it for more than three hundred years. It is this accomplishment and not her style and the fullness of her life that will merit books being written about her.

Published by Thriftbooks.com User , 13 years ago
The beautiful Queen Marie of Romania was a flamboyant character, egotistical, narcissistic, but in a way down to earth and really quite loveable. Married at age seventeen and packed off to Romania as the wife of the inept, unattractive Crown Prince Ferdinand, Marie had to make the best of things, and she did! Hannah Pakula's beautifully written book will carry you through Marie's turbulent life with gusto, but the saga is complicated- as Queen Victoria's granddaughter, son of the enigmatical Prince Alfred "Affie" and the equally enigmatical Grand duchess Marie, daughter of Tsar Nicholas II- Marie was related to everybody and knew everybody. The most fascinating parts of this fine biography for me were Marie's relationships with the famous royal personalities of her era. For instance, Empress Alexandra the wife of Nicholas II and first cousin to Marie was Marie's opposite- cold, scheming, secretive and socially maladjusted. She didn't cut any ice with the self-confident Marie and Marie didn't hesitate in voicing her opinion of the Empress. Oddly, arrangements were made for Marie's oldest son, the Crown Prince Carol and Alexandra's oldest daughter, Olga, to meet in hopes of a future marriage. However, the young people were not attracted to each other. Marie has delicious comments to make about Queen Victoria and Pakula explores the relationship between the Queen and this granddaughter. Although Marie wrote rather purple prose, you really get the feeling for what it must have been like to have been a little girl, even a confident little girl such as Marie, approaching the inner sanctum of the great Queen. The Queen must have been rather like a Buddha, a goddess, of this world but not quite of it. A child would be awed and scared and titillated and Pakula sets the stage for you. Marie had many lovers, and at least one of her children, Prince Mircea, was not Ferdinand's son. With dark brown eyes he could not have been produced by the blue-eyed Marie and the blue-eyed Ferdinand. Mircea was undoubtedly the offspring of the handsome, dashing, married Prince Barbo Stirbey, probably the love of Marie's life. Poor little Mircea died of typhoid before he was four years old. And then there's Waldorf Astor, not Marie's lover, but a huge factor in her life. And George V, who once loved her. And Charlotte, the troublesome sister of Kaiser Wilhelm II. And the future Edward VIII, whom Marie adored as a prince, but later considered a quitter. And Calvin Coolidge, and on and on. "The Last Romantic" is a feast about an era that has vanished. About an unusual woman who left her mark upon the world and even brought joy to it. Highly recommended! P.S. A book of photographs called "Queen Victoria's Family" by Charlotte Zeepvat, is suggested, as it contains many excellent images of Marie and her family, including a wonderful one of Marie "Missy" as a little girl.

Published by Thriftbooks.com User , 13 years ago
Like Hannah Pakula's "An Uncommon Woman" (the biography of the Empress Frederick), "The Last Romantic" is an enthralling read with numerous incidental details which combined to get right to the heart of the fascinating Queen Marie of Roumania. The richness of the writing is a fitting tribute to the passionate and romantic Marie, who, in spite of many personal tragedies, continues to shine as one of the most intriguing women of her age. Other members of the family are brought in to the story in a lucid and interesting manner. All in all, it is a book to return to often! Most Beautiful Princess

Published by Thriftbooks.com User , 14 years ago
Marie was granddaughter to queen victoria and czar alexander ii of russia.at 17 she was married to a man she barely new,into a unstable country and thrown.she made her marriage work and promote her new country trying to make the lives of her people better.
Trustpilot
Copyright © 2022 Thriftbooks.com Terms of Use | Privacy Policy | Do Not Sell or Share My Personal Information | Accessibility Statement
ThriftBooks® and the ThriftBooks® logo are registered trademarks of Thrift Books Global, LLC