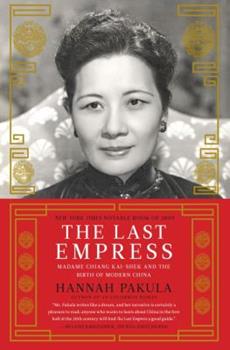 The Last Empress: Madame Chiang Kai-Shek and the Birth of Modern China

A must read, gives more than expected.

Published by Thriftbooks.com User , 12 years ago
From the scholar point of view, the main reason Hannah Pakula's book--The Last Empress of China--is such a fascinating book is that she cites plenty of sources. Her bibliography alone comprises six pages, and her notes over six hundred. The number of sources is generally a very good indicator of the quality of research and the quality of the story being told. There are a variety of themes interwoven throughout the whole book, which is not only about a woman, but men, politics, war, chaos, family values, United States national intelligence and American soldiers, China, Taiwan, Japan, Russia... the list is endless. The book is well worth reading, and in fact, it is hard to put down after the first or second chapter. It sheds a new light on Chinese and world history, and the untold is very much told as witnessed by original characters. If you love history, this is a must read.

Soong Mai-ling was a woman of great courage.

Published by Thriftbooks.com User , 12 years ago
This is a well researched and interesting story of Madame Chiang Kai-shek. The story also includes biographical background on her sisters Soong Ching-ling and Soong Ai-ling, her brother T. V Soong, Chiang Kai-shek, Dr. Sun Yat-sen, and a few others. Accurate information in China can be difficult to determine. It is sometimes a mix of gossip, rumors, and lies. Believe me, I lived in China 10 years. Nevertheless, I think Hannah Pakula has brought us some good history. I think her insights into Chinese culture are accurate.

It's all about power

Published by Thriftbooks.com User , 12 years ago
Even though Hannah Pakula is not a specialist in Chinese history, she sticks closely to the sources on Madame Chiang Kai-shek, and uses those sources skillfully and skeptically. Pakula is not trying to write a history of China; she is apparently after something else. The book provides enough background on the conditions in early 20th century China to make it clear that a person of high morals and great integrity would not last long in such a corrupt and chaotic environment as the warlord era. Given that background, what is interesting is not whether Mai-ling Soong is honest, but how she plays her hand once she marries Chiang Kai-shek. She has wealth, intelligence, and beauty. But even a wealthy, intelligent, beautiful woman could not rise to power in either China or the U.S. at that time. Perhaps not even now. Mai-ling finds her place as an intermediary at the intersection of two nations that desperately need and thoroughly misunderstand each other. She became a persuasive public speaker on behalf of China, speaking before the U.S. Congress at a time when a woman would ordinarily not be welcome. She secured huge amounts of American money for her people. That the KMT did not use the money the way Americans intended it to be used should not surprise anyone. That Madame CKS got the money at all is the interesting fact, and how she did it is a lesson in power. Bismarck would have understood.

The Last Empress: 105 years of spirited life for May-Ling the Chinese Dragon Lady who was the wife o

Published by Thriftbooks.com User , 12 years ago
Her name was May-Ling Soong. She lived from 1897 to 2003. She came from a wealthy household. Her father Charlie Soong raised himself from peasanthood to become a rich businessman. One of her sisters married Mr. Kung a millionaire businessman, another married the legendary Sun Yat-Sen the founder of modern China. One of her brothers T.V. Soong had a PH.D from Columbia in finance and was among the richest men in the world. What a family and what a lady! May-Ling studied in Georgia and graduated from Wellesley where her best friend was American Emily Mills. May-Ling spoke perfect English, was materialistic and a beautiful and sexy woman. In the 1920s she wed Kai-Shek. He became the dictator of China who lost in the Chinese Civil War against Mao's Communists. CKS and Mayling retreated to Taiwain in 1949 where they set up the nationalistic Chinese government. CKS died in 1975. May-Ling often spent a good deal of time in America during the power couple's long marriage. She often had skin problems and other ailments. She could be nervous and demanding of those around her. She could also charm the pants off famous men. Her spouse CKS was often cruel having no problem with eliminating those who opposed his policies. May-Ling was a devoted Methodist Christian and talked CKS into becoming a Christian. May-Ling spent much of her life in America. She lived in New York from 1975 until her death. She probably did not love CKS and had no children. During World War II she was adroit at bringing in millions of dollars to Chinese coffers as they fought the Japanese. She often visited the White House becoming friendly with Eleanor Roosevelt and FDR. President Truman did not like her since he felt she supported a corrupt regime. (which she did!). In many ways, as Pakula notes, CKS operated like a Chinese warlord. May-Ling and US presidential contender Wendell Wilkie had an affair. She could be kind or cruel depending upon her mood or political strategy. May-Ling could also be warm or aloof. She was adept at treating her servants like coolies! One of her sisters lived in Communist China and there were many quarrels and disagreements in her distinguished family. Author Pakula has written a massive 800 page book on Madame CKS and her times. It is excellent not only for the biography of May-Ling but also for examining in depth China's troubled 20th century history. The book is well illustrated with maps and photos. This is the best book available on May-Ling. It is a detailed and illuminating account of the life of one of the twentieth century's greatest women. Love her or loath her this is one of the best biographies of the year! Kudos to Hannah Pakula!

Published by Thriftbooks.com User , 12 years ago
A good biography tells a good story. With grace and great sympathetic imagination Hannah Pakula gives us a flesh and blood heroine, never a mere historical figure. For all that she is aware of her subject's faults, she does justice to her courage, her wit, and her sheer endurance. Thanks to its epic scope and rich cast of characters, this biography reads at times like one of those great three-volume nineteenth century novels. By showing May-ling Soong not only in the context of her powerful and problematic family but also at the very center of China's tumultuous modern history, Pakula makes clear how tangled the choices became for this Wellesley girl who dreamed of making something of her life. Having made a great match, by allying herself with what looks to be the man of the hour, the young Madame Chiang Kai-shek soon finds herself struggling to put a good face on the ill-advised decisions of a corrupt and capricious dictator. Not only is she serving as his translator but once Japan invades Manchuria and the Communists begin to present a serious threat to her husband's government, she increasingly assumes the role of his ambassador to the Western World. If power corrupts, then absolute power can be said to corrupt absolutely. It is to Hannah Pakula's credit that the reader leaves this book wondering what would have happened to May-ling if, instead of her older sister, she'd had a chance to marry Dr. Sun Yat-Sen. Or, perhaps better yet, if her romantic attachment to Wendell Wilkie hadn't been brought to an abrupt end by his death.
Trustpilot
Copyright © 2022 Thriftbooks.com Terms of Use | Privacy Policy | Do Not Sell or Share My Personal Information | Accessibility Statement
ThriftBooks® and the ThriftBooks® logo are registered trademarks of Thrift Books Global, LLC