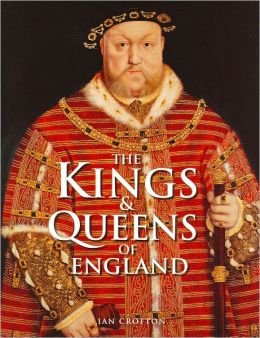 Kings and Queens of England

In the 9th century Alfred the Great declared himself the first king of England and established a monarchy that has survived the shock of Norman invasion in the 11th century, the brutal vicissitudes of... This description may be from another edition of this product.

Published by Thriftbooks.com User , 12 years ago
I like learning about history and loved reading about the Kings and Queens of England. This isn't the first book I've read on the subject, but it felt like the best one. It definitely had the most information about monarchs I'd never really heard of before. I thought it did a very good job of informing me without boring me. I would recommend it to someone who was interested in the subject.

Over a thousand years of royal history

Published by Thriftbooks.com User , 13 years ago
Beginning with Alfred the Great, who became King of Wessex in 871 AD, the author gives us a few pages about each king and queen since then, including some who were never crowned. (Matilda, Jane and Edward VIII are all featured.) Alfred was never really king of England although he gave himself that title, because England was not a unified country at the time. Some of the territory was ruled by the Danes, who at the time occupied a large are of northern Europe, only a small fraction of which is the Denmark of modern times. So beginning with Alfred is a contentious point, but most of the other regional kings of the time and afterwards do get a mention, if only because their rival armies fought plenty of battles. I'm not absolutely clear from this book when England became one country, but maybe there was no clear point. It seems that unity was achieved only temporarily at first, but that it eventually became permanent some time in the tenth century. Between Alfred's death in 899 and 1066, the year of the Norman conquest, there were various kings that, for the most part, mean something only to historians and students of royalty, but among them was King Canute (more correctly spelt Cnut), who is famous for trying to turn back the tide. So the early beginnings may be fuzzy, but after 1066, things take on the familiar look that I was taught in history lessons at school. For most of the next thousand years, the royal family continued to provide a poor example to humanity. Murder, adultery, divorce, civil war and revolution are among the recurring themes - and let's not forget the wilful destruction of abbeys ordered by Henry VIII. The book is laid out well, with a chapter for each king or queen. Timelines are provided, giving a quick summary of each monarch's life, while the more substantive text gives more detail about them. It is important to remember that the king was once the supreme ruler (and therefore in direct command of the army); parliament came much later and it was much later still before real power started to shift from the monarchy to parliament. So the monarchy is not as important as it once was and the author acknowledges that it faces an uncertain future once the reign of Queen Elizabeth II ends. There are plenty of pictures, though pictures of some monarchs in any form do not exist. While there are photographs of recent monarchs, others may be represented by paintings, statues or old coins, if these exist. A book such as this can only provide a general overview, but it does that superbly. If you are interested in the history of British royalty, this provides a good starting point. If you already have a library of such books, you may not need this.

Published by Thriftbooks.com User , 14 years ago
I bought this as a bargain book and found myself pouring over the pages. This all-encompassing history of England's monarchs is perfectly outlined, both in its chronology and its definition of separate family lines. I found the side-bar timelines helpful and the illustrations and pictures beautiful. This is a great reference book for any fan of English history.
Trustpilot
Copyright © 2022 Thriftbooks.com Terms of Use | Privacy Policy | Do Not Sell or Share My Personal Information | Accessibility Statement
ThriftBooks® and the ThriftBooks® logo are registered trademarks of Thrift Books Global, LLC