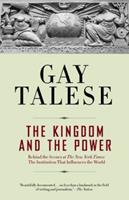 The Kingdom and the Power: Behind the Scenes at the New York Times: The Institution That Influences the World

"Beautifully documented . . . no less than a landmark in the field of writing and journalism."-- The Nation "Fascinating . . . Seldom has anyone been so successful in making a newspaper come alive as a human institution."-- The New York Times In this century and the last, most of history's important news stories have been broken to a waiting nation by The New York Times. In The Kingdom and the Power, former Times correspondent and bestselling author...

The Plotless Yet Enjoyable Kingdom

Published by Thriftbooks.com User , 11 years ago
There's the densely populated New York City. And the rest of America. And the rest of the world. One institution can affect all of the world. Essentially, it is a kingdom. The New York Times. And the influence is captured in a fact-filled, 526-page, 20-chapter, seasoned-with-French-words book by Gay Talese- The Kingdom and the Power. About now, I would give a brief introduction to the plot of this book. But guess what? There is none. Well, not a very clear one. What I can see is a basic plot about how people in the Times tried to change the older standards it had to adapt to more modern times. Yet, in the midst of a lot of descriptions of different Timesmen and anecdotes about them, this plot becomes very subtle. The development of the plot (whatever it's supposed to be) is very slow. There is a long substantial story only around Chapter 17-20, which is the end of the novel. And for the first 16 chapters, it doesn't seem like a full novel. It feels more like a collection of short stories. But this is justifiable, because without the 16 story-less chapters, the story in the last chapters will not make much sense. Talese puts in a lot of information in these chapters to make sure that the reader actually knows the background of the Times, so that then he can write his story uninterrupted with tangents for explanations. The best part about this book is Talese's writing style. As he shifts between different periods of time and different Timesmen, he describes their writing styles. After all, it is a book about a newspaper. Talese imitates the styles he describes, improving interaction with the reader by letting the reader experience the way readers of the newspaper at that time felt. He writes in the long-paragraph, opinion-lacking style to reflect a period in the Times, an upbeat, funny tone during another part, and even very optimistic writing, justifying mistakes to reflect Timesman James Reston. Talese also seasons his writing with various English-French phrases, such as bête noire, passé, politesse, and a lot more. Overall, it's an enjoyable book, but something you wouldn't finish fast. It has it's ups and downs-- sometimes you really want to keep reading and other times, you just want to keep the book far away and never read it again. Talese's writing style makes it interesting enough that you wouldn't completely stop reading the book, but just might read it extremely slowly. I give this book 3.5 stars out of 5.

Powerful Lessons But No Powerful Plot

Published by Thriftbooks.com User , 11 years ago
by Smitha Gundavajhala Once upon a time, in the land of New York, there was a powerful and prestigious newspaper called the Times. It printed "all the news that's fit to print." Everyone thought it was the greatest and most perfect newspaper in the history of the world. It wasn't. Gay Talese's book, The Kingdom and the Power, provides an inside look at one of the world's most prestigious newspapers. The level of detail in this book is impeccable, garnered from a slew of interviews, documents, and letters. The Kingdom and the Power tells the tales of Timesmen that ran the institution, those that worked at it, and those that will always be remembered by it. It tells of the many managing editors, of the woes of copyboys, of the mishaps of reporters, of the printers' strike, and of the ruling family of publishers, descended from the very first- Adolph Ochs. The book is little more than a string of connected anecdotes- amusing to read, of course, but there is no powerful story until the last few chapters of the book. Still, it is just story, not central plot. It hasn't the traditional beginning, middle, or end. The paragraphs, sometimes over a page, are tedious because the sentences that comprise them are long themselves. This book's course is best likened to a rambling path- it is long and scenic, and certainly worth the time, but it goes off on tangents. It is a lengthy but well-written discourse that does not take you from point A to point B, but all over the place; when you are finished, you have learned a lot of things, but you still don't know what the point is. It is a wonderful read, so go ahead and enjoy the scenery, but don't get lost. Work your way steadily down the path, and you will be rewarded. This book, published in 1969, should be archaic. The ideas, one might expect, are dated, the concepts unsuited to the current day and age. Sure, in fifty years setting type might seem to readers of the time what hieroglyphics seems to us today; even today the notion that one computer being introduced into a large corporation is a big advancement seems ridiculous. But the writing is such that this book is and always will be timeless. Talese's style itself is similar to the course of his book. It creates wonderful sights and sounds for the reader just from the musical quality of the writing. The language is accessible to most readers; a dictionary may be of use if the reader wishes to indulge in the wordplay to its full extent. Of wordplay there is a great deal. When I read the beginning of this book, I was drawn instantly by the introduction: "Most journalists are restless voyeurs who see the warts on the world, the imperfections in people and places. The sane scene that is much of life, the great portion of the planet unmarked by madness, does not lure them like riots and raids, crumbling countries and sinking ships, bankers banished to Rio and burning Buddhist nuns- gloom is their game, the spectacle their passion, normality their nemesis."

An Education in Journalism

Published by Thriftbooks.com User , 13 years ago
Talese's masterpiece has stood the test of time since its publication in 1969. Far from boring, the content is fresh and the style is flawless. The excitement of working at the NEW YORK TIMES comes through nearly every page. What also comes through is the standard of excellence, something that the TIMES has struggled with in recent decades.

Published by Thriftbooks.com User , 16 years ago
After reading Grahams autobiograpical work on the Washingto Post this, Talese's, book was immediatley linked to the other. Those who are interested in the evolution and preservation of our most important right would do well to peruse this work lest we forget the paramount value these works serve to keep us a free society in light of the countervailing forces of "dark fear and true belief." I shall go back and review the work in the interim thanks for the opportunity to allow me to give my humble feed back.
Copyright © 2020 Thriftbooks.com Terms of Use | Privacy Policy | Do Not Sell My Personal Information | Accessibility Statement
ThriftBooks® and the ThriftBooks® logo are registered trademarks of Thrift Books Global, LLC