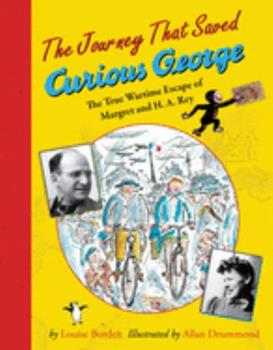 The Journey That Saved Curious George: The True Wartime Escape of Margret and H.A. Rey

In 1940, Hans and Margret Rey fled their Paris home as the German army advanced. They began their harrowing journey on bicycles, pedaling to Southern France with children's book manuscripts among their few possessions. Louise Borden combed primary resources, including Hans Rey's pocket diaries, to tell this dramatic true story. Archival materials introduce readers to the world of Hans and Margret Rey while Allan Drummond dramatically and colorfully...

Published by Thriftbooks.com User , 15 years ago
Curious George is beloved and known by adults and kids around the world - but few have heard of the history of his creators, Hans and Margret Rey, who had to flee their Paris home as the Germans invaded. Their journey on bicycles with their children's book manuscripts among their few possessions is recounted here with pictures, flare and drama. Borden uses primary resources, including Rey's own pocket diaries, to tell their tale in The Journey That Saved Curious George: The True Wartime Escape Of Margret And H.A. Rey, with Allan Drummond's drawings and vintage black and white photos throughout enhancing the biography and action.

A Book for All Ages

Published by Thriftbooks.com User , 16 years ago
Voila! It was there! A book that I had been waiting to read. On my desk I found The Journey That Saved Curious George: The True Wartime Escape of Margret and H. A. Rey by Louise Borden, illustrated by Allan Drummond. Oooh, it was a nice looking book! Everyone remembers Curious George, the mischievous monkey of picture book fame. If we did not read the books as children, we read them to our children. As a parent, I grew rather tired of them. Still, I wanted to read this book about an episode in the authors' lives. Margret and H. A. Rey were living in Paris at the start of World War II, and being Jewish, were very concerned for their safety. Both had been born in Hamburg and had become a citizen of Brazil, but they had been in France for four years working on children's books. Two manuscripts were ready for publication, one about a penguin names Whiteblack and another about a monkey named Fifi, but the European publishers no longer had paper. The couple's preparations to flee Paris became more serious when the Germans crossed through Belgium and the Netherlands. Getting all the paperwork completed was maddening. Louise Borden heard the story of the Reys' escape years ago and wanted to know more. She visited de Grummond Children's Literature Collection at the University of Southern Mississippi to find the Reys' papers, wrote to people who had known the Reys, and traveled to Paris and the towns through which the couple escaped. She enlisted Allan Drummond to illustrate the story. The result is a fine book for youth and adults. I enjoyed looking at Drummond's rich illustrations, showing the Reys on their bicycles in Paris, with people in their scarves and berets reading newspapers, crowded onto buses, carrying babies, all fleeing as Nazi planes dot the sky. Photos of the Reys, their passports, their day calendars, and other artifacts and illustrations of Curious George and Whiteblack also decorate the pages. The penguin is really cute. I should read Whiteblack the Penguin Sees the World soon.

Not Just For Children!

Published by Thriftbooks.com User , 16 years ago
This is a beautifully written, historically accurate book. If you want to spark your child's curiousity about history along with his curiousity about George, this book will do it. Adult readers will learn too. Our grandchildren love the book and ask us to read it over and over. We need more historically based books for children.

Published by Thriftbooks.com User , 16 years ago
Over the years, millions have followed along as Curious George learned the alphabet, went to the hospital, received a medal, and flew a kite. His most dramatic adventure, though, took place the year before his 1941 debut when his creators, Hans and Margret Rey, embarked on a journey that not only saved their lives but, in a sense, George's as well. On June 12, 1940, as the German army marched through France, the Reys left Paris, traveling on bicycles that Hans made using spare parts. For three days they pedaled, on the first leg of what was to become a months-long journey that took them to five countries. Their final destination was New York City, where they made their new home. On a gray, rainy day the Reys left Paris with little more than the clothes on their backs, but Hans carried precious cargo in the basket strapped to his bike --- a manuscript for their children's book featuring a cheeky monkey named Fifi (later re-named George). As Louise Borden recounts, Hans and Margret were both raised Jewish in Hamburg, Germany, and their families were acquainted. In 1935, nine years after Hans had left Hamburg to settle in Rio de Janeiro, Margret too departed Germany. After working as a photographer in London, she made her way to Rio to look up Hans Rey, with whom she then began collaborating professionally and personally. After the two artists were married in August of 1935, they returned to Europe and settled in Paris. It was here that they began writing and illustrating children's books, but five years after they arrived in the French capital they were forced to undertake their journey. Paris was becoming an increasingly dangerous place --- especially so for German-born Jews --- and hours after they left, the city fell to enemy forces. Borden writes in the book's Introduction, "For many years, I was intrigued by the story of Margret and H. A. Rey's flight from Paris.... Others in the children's book field had mentioned this escape from the Nazi invasion, but no one seemed to know the details of those harrowing days. The story felt incomplete. I wanted to know more. I wanted real images. I was curious, just like the Reys' famous little monkey, George." The result of Borden's curiosity is this vibrant biography, told in picture book format. She does a fine job balancing serious aspects, including Hitler's rise to power and the changing political climate, with the whimsical, such as the fact that Hans and Margret owned two pet monkeys while living in Brazil and later shared their Paris apartment with two turtles. THE JOURNEY THAT SAVED CURIOUS GEORGE is enhanced by Allan Drummond's colorful illustrations, along with the Reys' artwork, excerpts from Hans' pocket diaries, photos, correspondence, and mementos from Hans and Margret's long journey. Readers young and old will delight in this true-life tale of Curious George's creators. --- Reviewed by Shannon McKenna
Copyright © 2020 Thriftbooks.com Terms of Use | Privacy Policy | Do Not Sell My Personal Information | Accessibility Statement
ThriftBooks® and the ThriftBooks® logo are registered trademarks of Thrift Books Global, LLC