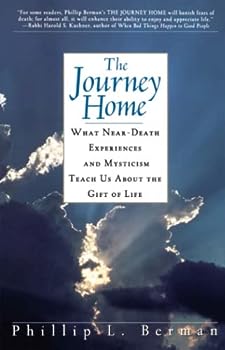 Harvard theologian Phillip Berman examines how near-death and mystical experiences can give our lives new meaning. Universal truths culled from the author's and others' experiences allow readers to... This description may be from another edition of this product.

Published by Thriftbooks.com User , 16 years ago
Berman's book is not thick, but he has succintly covered large and important issues about the meaning of life and how to live a spiritually meaningful life. He compares near-death exepriences with mystical experiences, present and past, and draws intellectually and logically brilliant conclusions of the common elements in them both. He does not concentrate on what NDEs may tell about our existence after death, but makes these accouts (combined with accounts of mystical experiences) a basis for a perennial philosophy, or as he prefers to call it eternal theology. His eternal theology, close to Aldous Huxley's perennial philosophy, is, as far as I am able to judge, the best basis for a tolerant, encompassing, unitive religion, that an intellectually honest person can accept in the Global Village we are living in. This is not an intellectual tour de force, the book is written with much warmth, gratitude for the gifts of life and humility. It's central message is the importance of love for a truly spiritual and fulfilling life. Read it! You will be richer afterwards.

Published by Thriftbooks.com User , 20 years ago
I only give this stars because while it is interesting, I didn't think the book was well organized. If it was, it would be five-star material. The chapter on hell is my favorite. Berman really pulls together some fascinating stories from each chapter. It will remove your fear of death, and strengthen your faith.

Published by Thriftbooks.com User , 20 years ago
This is a nice book. I can't claim familiarity with the entire literature on near-death experiences, but Phillip Berman's work seems to me to stand out in several respects.First of all, a good deal of the book is devoted simply to describing NDEs as reported by the people who had them. In preparation for this volume, Berman interviewed literally hundreds of people -- and, moreover, scoured the world's religious literature looking for further historical examples. The results are not all included here; in fact he has probably had to leave out many more than he was able to put in. But his selections are well-chosen. (For example, he devotes an entire chapter to the neglected topic of "hellish" NDEs, notably the experience of one Howard Storm.) And he spends most of his time on straightforward reporting rather than rushing to conclusions.Second, he ties all this NDE stuff to mystical tradition and "perennial philosophy" (which he prefers to call "eternal theology"). Himself Jewish, Berman also competently discusses the mystical traditions of e.g. Christianity and Buddhism without attempting either to adjudicate among their theologies or to reduce these religions to their strictly mystical portions. His conclusion, in a nutshell, is that NDEs and mysticism teach us essentially the same things about the nature of God and reality.Third, his conclusions are presented with thoroughness and proper caution. Berman does not attempt to minimize or paper over the genuine differences among the various types of NDE and mystical experience; he does not proclaim that his work has "finally proven" something that was hitherto only suspected and that he has thereby settled all the important questions; he deals sensitively and compassionately with the losses of loved ones (including his own) without relying in any way on maudlin sentiment at the expense of empirical reportage and theological argumentation. Generally speaking, he knows the difference between conclusions and speculations, offering some of each and claiming for his work just what it deserves. This is a sober and responsible work of theology, not an extended piece of tabloid journalism.Fourth, his topic is precisely what his subtitle indicates: he is interested in what NDEs and mystical experiences _teach us_, not in telling us how to go about _having_ such experiences ourselves (nor even in urging the importance of having them). He has what I regard as a healthy sense (based firmly in all of the religious traditions with which he deals) that there is something unsound about seeking such experiences for oneself, and for that matter about (mis)taking the purpose of religion to be the bringing about of such experiences. This is, again, a work of theology, not a how-to handbook.This seems to me to be a standout work, then. Again, I do not claim to have read the whole NDE literature, but of the handful of books I _have_ read, this one is unique. I highly recommend it to anyone interested in these topics.

A Message of Hope

Published by Thriftbooks.com User , 23 years ago
I have just finished reading THE JOURNEY HOME by Philip L.Berman and I want to shout from the housetops: Read this book!A Jewish scholar has interviewed people of various (or no) religious persuasions who have had NDE...Near Death Experiences. As one who has had such an experience, I have read every book I can find on the subject, and Berman's impressed me the most, probably because he is so objective.In a fine writing style (I truly read this book in one sitting...or I should say, lying down!...) and wept with joy when I finished it, for it offers such faith, hope and love for all of us, whatever our beliefs. The similarity of the experiences are in themselves miraculous, yet it is the differences that make them believeable. For example, in my own NDE experience I did not look down and see my body on the hospital gurney...but that is not surprising. I have never been one to look back, and I was so enthralled with the experience I had no interest in the world I had left. Nor did I see "my life flash before me"...maybe it did, but I wasn't watching. I was so drawn to the Light, the Sounds, the aurae, the people, all I wanted to do was stay there, forever. I didn't associate this with a DNE until years later when I read of similar experiences. Truly such an experience does change your life.Just reading Berman's book can change your life. I defy anyone to read it through and still question the existance of an afterlife. I have recommended it for hospice reading, as well as family reading. No longer will the reader fear death.Teresa Bloomingdale

Published by Thriftbooks.com User , 23 years ago
Having read more than 300 spiritual/metaphysical books over the past 10 years, I have would have to rate this one in the top 10, perhaps even in the top five. Author Berman is an excellent writer and is both objective and analytical in his search. The near-death experiences are only a part of the evidence he explores.
Trustpilot
Copyright © 2022 Thriftbooks.com Terms of Use | Privacy Policy | Do Not Sell My Personal Information | Accessibility Statement
ThriftBooks® and the ThriftBooks® logo are registered trademarks of Thrift Books Global, LLC