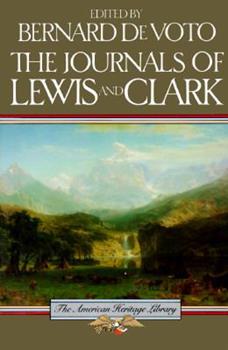 The Journals of Lewis and Clark

The Journals of Lewis and Clark are "the first report on the West, on the United States over the hill and beyond the sunset, on the province of the American future" (Bernard DeVoto). In 1803, the... This description may be from another edition of this product.

Published by Thriftbooks.com User , 15 years ago
I picked this book up over the summer (2006) while traveling through 12 states in 12 days (Western and upper Mid-west)- I think I picked this up while visiting Mount Rushmore. Anyway I started reading this book during some of this trip and I found it so interesting that I could not put it down. After I finished reading this and having told some of my co-workers about several parts of the book while I was reading it one of them asked to borrow it and another one went ahead and bought his own copy. If you love non-fiction, biographical, historical books that have an edge of exitement this one is for you and I highly recommend it. Honestly this is one of the top 10 books I have read and I have read a lot!

Published by Thriftbooks.com User , 17 years ago
This is an outstanding read made possible by excellent editing and editorial comment. Some have criticized the editor for modernizing and correcting the spelling and even interpreting the notes found in of Lewis and Clark's journals. Frankly I think that this is will make this edition of their journals more accessible to the masses. Their continental crossing and return is one of the greatest stories ever told and thank goodness they documented it so carefully. The journey and this book have inspired me to make a trip or two next year to see for myself some of the places they saw and documented for the first time only two hundred years ago. Great editorial notation on places, animals, and people to give the modern reader some reference along with beginning chapter notes. Jefferson's amazing directive in its entirety is included. I liked reading it and referencing some good maps so I could vicariously place myself with the expedition. The Corps of Discovery was made up of great American hero's. This riveting journey is a must read for all ages.

Essential edition of a timeless classic.

Published by Thriftbooks.com User , 22 years ago
To me, the Lewis and Clark expedition ranks as one of the greatest voyages of discovery in human history. Because of the scientific and geographical discoveries that were made, it stands in significance alongside the travels of Marco Polo, the journeys of Christopher Columbus, Ferdinand Magellan, and James Cook, and the Apollo 11 mission to the moon.This one-volume edition of Lewis' and Clark's masterpiece is outstanding in every way. Edited by the late Pulitzer Prize-winning historian Bernard DeVoto (1897-1955), it allows the reader to gain a fuller understanding of the Lewis and Clark expedition through the words of Meriwether Lewis and William Clark themselves. Lewis and Clark's expedition begins in 1804, taking the 33-person Corps of Discovery from St. Louis, Missouri to the Pacific Ocean and back again (a distance of over 8,000 miles). Among other things, it results in the initial exploration and mapping of the Great Plains and Pacific Northwest, and the description and classification of over 100 never-before seen species of flora and fauna. In addition, it dispells the myth of a northwest passage to the orient, and opens up the vast central and western regions of the continent to commerce with the United States.Captain Meriwether Lewis, the commander of the Corps of Discovery, is instructed by President Thomas Jefferson to keep a journal of the daily events, scientific observations, and measurements of latitude and longitude along the way. Both he and his co-commander, Captain (in reality Lieutenant) William Clark follow Jefferson's instructions, although not always faithfully.Lewis and Clark return from their 30-month long expedition as national heroes. Jefferson expects Lewis to oversee the quick publication of the Journals, but Lewis, for a variety of reasons, disappoints the President. He fails miserably as governor of the Louisiana territory; he suffers from depression and alcoholism. In 1809, he (it is surmised by historians) takes his own life, never having submitted so much as one page of the Journals' manuscript to an editor. After Lewis' suicide, Clark teams with editor Nicholas Biddle and completes a short, narrative version of the Lewis and Clark journals. Published in 1814, it contains none of the scientific data compiled during the expedition. Not until 1904 are the Journals of Lewis and Clark published in their entirety, with all of the explorers' scientific observations included.Bernard DeVoto begins this volume with a well crafted 60-page introduction that explains the historical background to the Lewis and Clark expedition. Then, DeVoto gets out of the way and allows Lewis, Clark, and, on occasion, other members of the Corps of Discovery, to convey with their own words the drama, excitement and high adventure of this magnificent undertaking. Most of the more routine scientific data has been edited out, leaving behind Lewis and Clark's outstanding descriptions of the expedit

Now is the time to relive this great American journey.

Published by Thriftbooks.com User , 22 years ago
The Lewis and Clark Expedition ranks among the greatest journeys ever taken. This one-volume condensation of the captains' words makes a fine companion for anyone planning a trip along the trail. Highly recommended.

Published by Thriftbooks.com User , 23 years ago
Fascinating personal day-by-day account of the journey of Lewis and Clark through the Louisiana Territory. As you read, you feel yourself slowly seeing the American west as it was seen by those who first wrote of its magnificence, the customs of the natives, the wildlife, and climate. You see it for what it was, and for its possibilities. This edition has been edited from the individual journals of both Lewis and Clark and some of the others. It has been made more compact by putting in only passages that tell the story, but with no sentence restructuring or spelling corrections. Sometimes this requires you to figure the meaning out, but is never a big problem. The chapter length was perfect for reading a chapter a day which means 33 days. The only bad chapter was 31, which was a summary of one leg lifted from DeVoto's The Course of Empire, which I felt was harder to understand than the journals. The appendix includes Jefferson's Instructions, list of personnel, and specimens returned.
Trustpilot
Copyright © 2022 Thriftbooks.com Terms of Use | Privacy Policy | Do Not Sell or Share My Personal Information | Accessibility Statement
ThriftBooks® and the ThriftBooks® logo are registered trademarks of Thrift Books Global, LLC