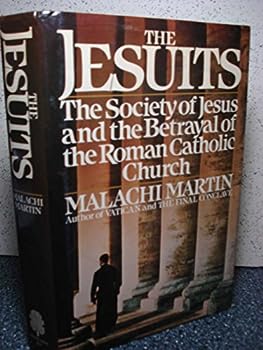 The Jesuits: The Society of Jesus and the Betrayal of the Roman Catholic Church

This description may be from another edition of this product. In The Jesuits, Malachi Martin reveals for the first time the harrowing behind-the-scenes story of the "new" worldwide Society of Jesus. The leaders and the dupes; the blood and the pathos; the...

Eye of the Hurricane

Published by Thriftbooks.com User , 15 years ago
Here is Malachi Martin at his most passionate and informed, stating the obvious about his former religious order and its descent into sheer insanity. That it: (1) was a foundation for modernist revolt early in century 20; (2) provided a good hiding place in the middle years for underground wackiness ala Teilhard de Chardin; (3) concocted, post Vatican 2, a startling and heady vision of "salvation as seen through the scope of a rifle" (liberation theology) and pushed it determinedly in Central America. Yes, this book only states the obvious. The facts were published elsewhere, many other places first, indeed -- Time magazine, the Jesuits' magazine America, the "liberation theology" tomes of Fr. Gustavo Guiterrez and Ernesto Cardenal. Only with a different spin, of course -- it was all considered quite "daring, challenging, courageous." Especially here, among self-styled Catholic "progressives" in the good old USA. You don't have to do any "deep research" -- just go into your public library's microfilm department and scan old Life and Look magazines . . . . So why the furor? Well, here in the USA, one judges the worth of a book or article by the extent to which one "agrees" with it. In other words, ideology precedes assent, even information. Now, you can even get advanced degrees for it. Oh well, maybe Malachi Martin once was a lusty fellow, maybe he was a jerk, maybe there are even some minor innacuracies of date, place, etc. Fine: and for the purpose of argument, agreed. So what? The late Father John Hardon, S.J., who also knew both his order and the Vatican well, staunchly defended this book and its publication. All said, this is indispensible history between 2 covers, that will not be found between 2 covers anywhere else. It is elegantly written, and a fully engaged report from the eye of a hurricane its author knew only too well.

The Modernist Take-Over of the Society of Jesus.

Published by Thriftbooks.com User , 17 years ago
_The Jesuits_ by Roman Catholic priest and former Jesuit Father Malachi Martin is an important book which describes the debacle that has become of the Society of Jesus within the Roman Catholic Church. Started by Inigo (Saint Ignatius) of Loyola and once suppressed before in its history, the Society of Jesus (the Jesuits) long represented a unique force within the Roman Catholic Church maintaining a code of strict obedience to the Roman Pontiff. This book begins by showing how the original intent of Ignatian Jesuitism has been subverted, wherein spiritual aspirations are replaced by modern materialist needs. Thus, many in the Society of Jesus have embraced modernism, particularly in the form of Liberation Theology, and come to fight on the side of Marxism against alleged capitalist oppression (particularly in Latin America where a "preferential option for the poor" is used to justify Marxist revolution). Father Malachi Martin traces the history of Jesuitism from Saint Ignatius and then shows how in the modern era, an era characterized by unbelief and materialism, the philosophy of modernism came to dominate within certain circles of the Roman Catholic Church. Although suppressed by Roman popes, modernism continued to live an underground existence until its eventual rupture during the Second Vatican Council. Certain documents presented at this council have proven highly ambiguous providing the necessary edge needed by modernists to achieve prominence within the Catholic church and particularly within the Society of Jesus. Father Malachi Martin shows how three different individuals shaped the Jesuit experience and transformed traditional Jesuitism into its modernist version. These individuals are George Tyrrell (who denied many of the central tenets of the Catholic faith), Pierre Teilhard de Chardin (who came to believe in a new "evolutionary" faith), and the individuals behind Liberation Theology (an attempt to smuggle Marxist class struggle into the Christian religion). The book next traces out the development of these ideas through various General Councils of the Jesuit Order, particularly those headed by Father General Pedro Arrupe. Father Martin alleges a growing conflict between the Jesuit Order and the Roman papacy, beginning with Pope Paul VI and culminating in the current papacy of John Paul II. However, despite this conflict, and despite obvious defiance by various individuals within the Jesuit Order, the order has not been suppressed by the popes. Traditionalists such as the author (now deceased) and others have been forced to abandon the Jesuit Order (making use of the escape clause upon taking the oath to belong to the Jesuits) and have been fervent opponents of the new direction taken by the Jesuits. This book offers a disturbing account of the church in decline, while modernists within the Jesuit Order attempt to subvert the teachings of the Roman Pontiffs. Traditionally Jesuits have made great contributions, particular

Fantastic insight into the most pretigious clerical order

Published by Thriftbooks.com User , 22 years ago
As a practicing catholic and graduate of a jesuit high school and college, this book held special significance. The historical account of the society and the Ignatian principles upon which it was founded and governed is detailed with amazing insight and clarity. The politics and intrigue that have confronted Pope JPII are outlined magnificently. This book is an intellectual delight and contains suspense and gepolitical analysis that is a true education. the Jesuits are a special order and this book will clearly outline why. Regrettably, Martin shows in a thorough and convincing manner how they have arrogantly abandoned Ignatius and the Pope. Highly recommended.

Published by Thriftbooks.com User , 24 years ago
In this book modernism is defined as the harnessing of religious beliefs and doctrines to the prevailing cultural norms or climes of any given age or period. It means that one may adjust their beliefs as one sees fit and act according to their personal perceptions. This position is in direct contradiction to the historical premises of Roman Catholicism which taught that the pope is the vicar of Christ, that he has teaching authority within the Church, that there is absolute truth which the Church assists mankind in uncovering and understanding, that the doctrines and practices of the Church are promulgated through the magisterium (bishops and priests) to the laity who profess and believe, and that the most important single event in human history was the redemption of mankind through the suffering and death of Jesus Christ to expiate the sin of Adam. The book's central thesis is that the Jesuits, known for centuries as the pope's men, are in open rebellion against the pope and the Church. It is of interest that historically the Jesuits took a special fourth vow of obedience to the pope, and were known as the "Pope's men." The book draws comparisons between the events of the 15th-16th century and today, e.g., the discovery of the new world, scientific verification of a heliocentric versus a geocentric world, the Renaissance, (where man is the measure of all things), and the social and scientific changes active in the modern world, and the democratization of most institutions. When the Jesuits were originally established by St. Ignatius Loyola in 1540 it was their charter to teach and preach the gospel showing that there was no conflict between faith and reason. This is the basis of Thomistic theology and that theology is the under girding of Roman Catholic thought as well. The Jesuits fulfilled their mission well until the late 20th century when modernism overwhelmed their thought, teachings and actions. Their involvement with revolution theology in South America, the writings of Teilhard de Chardin, S.J. and George Tyrell, S.J., demonstrates the open rebellion of the order against the Church's magisterium. Malachi Martin maintains that modernism has permeated all Jesuitical thinking and action. Today the Jesuits teach that church doctrines and teachings on papal infallibility, original sin, homosexuality, the sacraments, the meaning of redemption and salvation and other traditional teachings as taught by the Church for two millennia, are no longer valid or germane and that these issues should be rethought in light of modern life and needs. All is relative! Heretofore, the Jesuits were the staunchest defenders of fundamental Catholic teachings and the pope. They redefine "Church" stating that it is not the hierarchy or structure, but it is the local community and "whatever" it believes. There is a complete democratization of the acceptance of what one will believe and therefore an aversion to being taught by someone else, particularly
Copyright © 2020 Thriftbooks.com Terms of Use | Privacy Policy | Do Not Sell My Personal Information | Accessibility Statement
ThriftBooks® and the ThriftBooks® logo are registered trademarks of Thrift Books Global, LLC