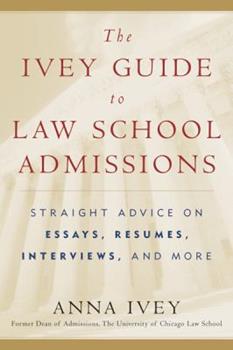 As dean of admissions at the University of Chicago Law School, Anna Ivey decided the fate of thousands of law school applicants. In this book-the first of its kind by a former law school admissions officer-she draws on her expertise to cover topics from the application and the essay to the interview and the recommendations, touching on hot-button issues like how much the LSAT, ethnicity, and age really matter. Offering an insider's advice on how to...

The most useful and comprehensive manual I've ever read

Published by Thriftbooks.com User , 16 years ago
This incredible, seemingly compact, book contains all the essential and critical information one needs in order to prepare for law school admissions, from A to Z. Seriously, what more could one possibly need? Anna Ivey describes the admission process starting from early preparation, to actual interview and picking the schools where you are admitted. Not to mention how to effectively study for the LSAT, what to write in the addenda, optional statements, resumes, how to request LORs, what to wear to an interview (including how to smell!) and even the exact timing and content of thank you notes following the interview! And all of this, mind you, from a valuable insider's point of view - not of undergraduate advisors', other law school applicants', or career advisors' who might have read the theory of the admissions process, or have even gone through it, but being on the other side of it - as applicants. Having worked a substantial number of years in the nation's top law school as an Admissions Dean (!), which I'm sure is on the TOP FIVE list of all of us, applicants - Anna Ivey tells it all raw and realistically, just how it is. How admission offecers hate pretentiousness, arrogance and cockiness that most kids manifest in their essays, or how they're sick to their stomaches of reading redundant and monotonous essays about saving the world's misfortunate and the environment, whereas they fully realize that it's all lies because the fact is that only 1-2% of all law school graduates actually pursue public interest law, etc., etc., etc. Read this book, it's priceless. I concur with the previous posters: you'll never find a better investment for your few bucks!

A helpful guide--with a couple of quibbles

Published by Thriftbooks.com User , 16 years ago
I've been the prelaw advisor at a medium-sized religious college for more than twenty-five years, and my advice about law school application runs largely along the lines outlined in Anna Ivey's nicely written book. In the future, if a student begins to write me off as a curmudgeon, I'll be able to cite chapter and verse from this author, who's a good quarter-century younger and has a far better claim to speak with authority about such matters than I. So, undergraduates, read and heed. Nevertheless, I have a few quibbles. One inference of the Ivey Guide is that a great many admission decisions are made on the basis of personal essays, interviews, and recommendations. Actually, as Ms. Ivey would probably agree, most decisions are based flatly and unimaginatively on GPA, LSAT, and minority status (if applicable). My feeling is that the other materials often serve largely as conscience salve for the typical admissions officer (of which Ms. Ivey was certainly not). In my experience, essays, recommendations, and the like prove most significant for those at the top and bottom of the food chain: to students applying at the twenty top-ten law schools (the probable target market for this book) and students who will gladly take anything above the California unaccrediteds. I also hold reservations about the sample essays and sample recommendations given in the appendix. The good ones are better than the bad ones for sure, but I found myself disliking all the authors. To me the best of the essays sound like they were written by slick showoffs. (At least the authors either have great writing skills or good ghostwriters.) As for faculty recommendations, I've had numerous students admitted to the best law schools without ever having written anything longer than this review. I wonder if there are now admissions officers out there with a permanent wince because of the longer rambling essays and recommendations that are likely to appear because of the advice given in this book.

The Most Informative Guide Available: A Must Buy!

Published by Thriftbooks.com User , 16 years ago
Ever wonder why people with perfect LSAT scores and GPA's get rejected from elite law schools? Anna Ivey can give you the exact reasons in this book: Your PS was pompous sounding or you wrote about saving some endangered species (which apparently many people write about). After reading personal statements from many people who send it to me on a law school message board I am appalled by what people are actually sending in. They literally break every taboo that Ivey says not to. People with great lsats/gpa are actually writing themselves out of great law schools. She gives so much info from personal statements to resumes to letters of recommendations. This book is one of the wisest investments you can get if you are applying. It even outshines Montauk's book which I thought I would never say. (But both of them together would make a lethal combo in helping you get into LS). Anna Ivey offers law school applicant services but after reading this it makes you wonder what else she could possibly say. One last myth she breaks: it's not as numbers driven as you may think.

Published by Thriftbooks.com User , 16 years ago
Having worked at 3 law firms, I have received an enormous amount of "advice" on law school admissions. Every attorney I've ever spoken to has graciously added their two cents on "what gets one into law school." While they are all great attorneys in their own right, and their advice is appreciated, I can't help but think that they don't know what they are talking about. Sure, they got into law school...but how do they know exactly what got them in? How do they know what the admissions officers liked about their application? For these reasons, I knew I would have to buy some sort of guide law school admissions. Anna Ivey's book is exactly what I was looking for. It is extremeley well written, thorough, and helpful. Most importantly, Anna used to be a dean of admissions at Univ. of Chicago Law - so she definitely has some authority on the topic of law school admissions. I've bought 3 books on law school admissions and Anna's book is easily the most complete book. I've recommended it to all my friends already.

Published by Thriftbooks.com User , 16 years ago
I am hesitant to write this review because I still have not finished my law school applications and I really do not want my competition to read this book. But hopefully for my sake it will take at least a year for most law school aspirants to find out about this book. It is the best of its kind. I used to think that Montauk's book (How to Get Into the Top Law Schools) was the best, the same way that basketball fans used to have certain names in mind regarding who was the greatest player before Michael Jordan came along and outclassed all of his predecessors. Ivey is not merely a consultant, she is also the former Dean of Admissions of UChicago Law School, so she really knows how decisions are made on the inside. Montauk talks down to his readers while Ivey is completely down to earth and speaks to you like you're a trusted friend. Montauk gives one and two-liners from various current admissions deans who realistically cannot speak freely in the printed media; Ivey gives it to the reader straight -- she is now a private consultant and is no longer required to toe the party line for her university. It really shocked me when Ivey began by saying that, despite what law schools say about thoroughly considering each of the thousands of applications that they receive, application readers only spend five minutes or so on each app. That's all you've got -- five minutes to dazzle them. She proceeds to tell us exactly how to do the dazzling. Anna Ivey charges hundreds of dollars per hour for her time, but I benefited from her collective wisdom by simply picking up a copy of her book.
Trustpilot
Copyright © 2022 Thriftbooks.com Terms of Use | Privacy Policy | Do Not Sell My Personal Information | Accessibility Statement
ThriftBooks® and the ThriftBooks® logo are registered trademarks of Thrift Books Global, LLC