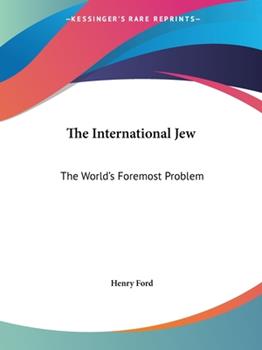 This scarce antiquarian book is a facsimile reprint of the original. Due to its age, it may contain imperfections such as marks, notations, marginalia and flawed pages. Because we believe this work is culturally important, we have made it available as part of our commitment for protecting, preserving, and promoting the world's literature in affordable, high quality, modern editions that are true to the original work.

a truly EXCELLENT book : altough this book was written many years ago , it's still very relavent and

Published by james lewis , 2 years ago
this is a great source of information for those looking for the TRUTH : not just what your told in the mainstream media .

Published by RaAhWaBaN , 2 years ago
Time for the Hebrew to take down the "Jew"....Revelation 3:9....Very well footnoted...

AHEAD OF HIS TIME!

Published by Thriftbooks.com User , 11 years ago
Thoughtful, enjoyable, reality based and even handed - and downright eerie in it's accuracy of Mr. Ford's predictions and wonderful ability to draw on history. FABULOUS! A MUST read that is IMPOSSIBLE to put down!

An American Must Read!!

Published by Thriftbooks.com User , 13 years ago
Too late, because we didn't listen to Henry Ford, or Patton, or U. Grant, or Martin Luther. Now that the Jews control our media, our economy, Our Homeland security and are at the top of our government as "Dual Citizens" It's too late. This will explain how it happenned, as it serves as a warning we didn't heed. Referenced are the Protocols of Zion, which is also a must read for Americans and Christians. This explains how we look the other way as Israel exterminates Palestinians and we still allow them "Victim" status. A must read for Americans and Christians!

Published by Thriftbooks.com User , 13 years ago
Mr. Ford was right about the International Jew. He was a prophet before his time and a keenly observant scholar on the Jews. Every brave, patriotic American who dares to even mention the Jews in anything other than a brilliant and worshipful light usually becomes the target of vicious slurs and bitter name-calling by agents of such organizations as the Anti-Defamation League of B'nai B'rith, a known anti-American group whose purpose is to cover up all criticism of Jews by any means necessary, including terror, loss of livelihood, slander, libel and even murder. Jews are owners and controllers of most of the present-day news and entertainment media; the gambling, prostitution, pornography, liquor and drug rackets; they are heads of most of the major educational institutions; they monopolize the legal and medical fields - in short, there isn't a single facet of everyday life that Jews don't control in some way, including our thoughts and opinions.

Published by Thriftbooks.com User , 14 years ago
This is one of those books that is almost literally too hot to handle, except that it's not, really. Henry Ford has a peculiar place in the pantheon of American historical figures--he invented the modern assembly line and thus helped to popularize the automobile by making it affordable to the masses. Around 1920 he published a series of articles on the subject of what he called "the international Jew", around which time he was quoted as saying that the Protocols of the Elders of Zion seemed to "match what was going on". One need not imagine the outcry--it continues to this day. The question is--is the book worth reading? My answer has to be an emphatic yes. Wherever you stand on this issue, it is an essential work that must be considered in any study of so-called anti-semitism and its roots in America (as opposed to its much more complex and older roots in Europe.) Having always thought of Henry Ford as the father of the automobile and not as a writer on world affairs it is interesting to say the least to read his thoughts on the so-caled "Jewish Question". Contrary to what we are led to believe by those who would prefer this book be burned rather than read, even critically, it is not in the form of a hateful screed (a trend I'm discovering is true of much allegedly "hateful anti-semitic" literature.) Ford could hardly have provided modern historians with a better account of just what this "Jewish Question" was that so concerned him and others who have been unfairly labelled by history as simple "jew-haters". In his writing he is very much aware of the accusations (same then as now) that any interest in the study of Jewish group solidarity and power (both political and economic) must need be motivated by jealousy or historic-religious bigotry. In this we can all sympathize who have to contend with the gratuitous "anti-semite" smear when we do as little as take issue with the actions of AIPAC. One problem no doubt stems from Ford's reliance on the Protocols that we are assured time and again are forgeries. Ford makes an excellent point however that whether forged or not they describe in some detail things that, from his vantage point between WWI and WW2, seem almost prophetic given their appearance as early as 1905 (they are nonetheless alleged to have been written in 1897 or thereabouts, speculated by many to have been authored by Theodore Herzl, the father of modern Zionism, with no evidence.) While to the modern and enlightened reader much of Ford's writing will smell, if not actually read as quite possibly anti-jewish, perhaps most unfortunate is Ford's clear belief that the question of Jewish power in the world (i.e. independent of the states in which they reside) is of interest primarily to the dominant anglo-saxon racial majority in America whom are most threatened by what he sees as the Jews' much more developed sense of in-group identification and solidarity. The modern and enlightened reader benefits of course from a more balanced

Published by Thriftbooks.com User , 14 years ago
Gerald L. K. Smith tells us: "At the apex of his business career Henry Ford, the industrial genius sensed that a terrific effort was being made to take his business from him and manipulate it into the hands of the money-changers. Mr. Ford had the impression that these manipulators were being engineered by powerful Jewish financiers. "He called to his office the most intelligent research men within his acquaintance. He commissioned them to make a thorough study of the International Jew and publish their findings in "The Dearborn Independent," which at that time was the official organ of the Ford Motor Company. No expense was spared, and it is estimated that literally millions of dollars were spent by Mr. Ford on this project. The original articles were carried first in "The Dearborn Independent," and then published in book form." In his book "My Life and Work," published in 1922, Henry Ford includes the following concerning the "International Jew" series of articles: "The work which we describe as Studies in the Jewish Question, and which is variously described by antagonists as "the Jewish campaign," "the attack on the Jews," "the anti-Semitic pogrom," and so forth, needs no explanation to those who have followed it. Its motives and purposes must be judged by the work itself. It is offered as a contribution to a question which deeply affects the country, a question which is racial at its source, and which concerns influences and ideals rather than persons. Our statements must be judged by candid readers who are intelligent enough to lay our words alongside life as they are able to observe it. If our word and their observation agree, the case is made. It is perfectly silly to begin to damn us before it has been shown that our statements are baseless or reckless. The first item to be considered is the truth of what we have set forth. And that is precisely the item which our critics choose to evade. Readers of our articles will see at once that we are not actuated by any kind of prejudice, except it may be a prejudice in favour of the principles which have made our civilization. There had been observed in this country certain streams of influence which were causing a marked deterioration in our literature, amusements, and social conduct; business was departing from its old-time substantial soundness; a general letting-down of standards was felt everywhere. It was not the robust coarseness of the white man, the rude indelicacy, say, of Shakespeare's characters, but a nasty Orientalism which has insidiously affected every channel of expression -- and to such an extent that it was time to challenge it. The fact that these influences are all traceable to one racial source is a fact to be reckoned with . . . Our work does not pretend to say that last word on the Jew in America. It says only the word which describes his present impress on that country. When that impress is changed, the report of it can be changed . . . Our opposition is only to idea
Copyright © 2020 Thriftbooks.com Terms of Use | Privacy Policy | Do Not Sell My Personal Information | Accessibility Statement
ThriftBooks® and the ThriftBooks® logo are registered trademarks of Thrift Books Global, LLC