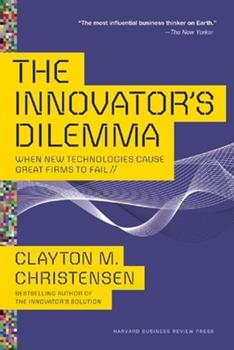 The Innovator's Dilemma: When New Technologies Cause Great Firms to Fail

Named one of 100 Leadership & Success Books to Read in a Lifetime by Amazon Editors A Wall Street Journal and Businessweek bestseller . Named by Fast Company as one of the most influential leadership books in its Leadership Hall of Fame. An innovation classic. From Steve Jobs to Jeff Bezos, Clay Christensen's work continues to underpin today's most innovative leaders and organizations. The bestselling classic on disruptive innovation, by renowned...

Published by Darius , 1 year ago
Great

Published by Thriftbooks.com User , 17 years ago
The Innovator's Dilemma explores how the creation of new technologies can cause companies to lose market share or their markets entirely, even companies that do everything right such as listening to their customers, watching the marketplace, and investing in research and development. The author argues that, while existing thriving companies can be successful with sustaining technologies, these same companies often falter with the advent of disruptive technologies. They either often do not want to put their resources into developing the new technology, because their existing customer do not want it or they attempt to fit the new technology into the existing market instead of looking to create new markets for the new product which generally doesn't work. Both of these decisions cause the company to lag in the development of the disruptive technology and eventually wither away to the competition of smaller companies that focused on developing the eruptive technology. The dilemma examined is, while it is important for companies to give their customers what they want to be successful in the present, they need to know when to begin to move their resources into technologies or services t hat represent the moneymakers and markets of tomorrow. Though concentrating mainly on the disk drive industry, the author also looks at the retailing industry, pharmaceutical industry, and automobile industry including the development of the electric car, among others. Examples of disruptive technologies include the evolution of disk drives from 14 inch to 8 inch to 5.25 inch to 3.5 inch to 1.8 inch, the introduction of off-road motorcycles to North America. The replacement of transistors by vacuum tubes, and the creation of discount retailers such as K-Mart. Sustaining technologies are those that improve upon existing products or technologies 'along the dimensions of performance that mainstream customers in major markets have historically valued'. Most advances in technology have been sustaining in nature, which may very well be one reason why, when faced with a disruptive technology, ordinarily successful companies fail with regards to those disruptive technologies. Another reason for successful firms failing to capitalize on disruptive technologies, this goes against what is normally considered 'rational financial decision-making'. Generally, disruptive technologies have low profit margins, are geared to 'emerging or insignificant markets', and a company's best customers usually do not want, need, or cannot use the disruptive technology. The author outlines four basic principles to successfully deal with disruptive innovations which he likened to man first learning how to fly. In the introduction, he wrote that when man first learned to fly, he ignored the basic principle of physics. Once the basics principles of physics were recognized and put to use, man was able to fly. Similarly, he argues that once managers recognize and utilize the principles of disruptive

Published by Thriftbooks.com User , 20 years ago
This is a book is about successful, well-led companies -often market leaders- that carefully pay attention to what customers need and that invest heavily in new technologies, but still loose their market leadership suddenly. This can happen when disruptive technologies enter the stage. Most technologies improve the performance of existing products in relation to the criteria which existing customers have always used. These technologies are called sustaining technologies. Disruptive technologies do something different. They create an entirely new value proposition. They improve the performance of the product in relation to new performance criteria. Products which are based on disruptive technologies are often smaller, cheaper, simpler, and easier to use. However, the moment they are introduced, they can not at once compete against the traditional products and so they cannot directly reach a big market. Christensen researched how disruptive technologies have developed in the computer disk industry, an extremely rapid evolving industry. He identified six steps in the emergence of disruptive technologies: 1. Disruptive technologies often are invented in traditional large companies. Example: at Seagate Technology, the biggest producer of 5,25 disks, engineers in 1985 designed the first 3,5 disk. 2. The marketing department examines first reactions from important customers to the new technology. Then they notice that existing customers are not very interested and they conclude that not a lot of money can be made with the new product. Example: this is what happened at Seagate. The 3,5 disk's were put upon the shelf. 3. The company keeps on investing in the traditional technology. Performance improvement of the traditional technology is highly appreciated by existing customers and a lot of money is being made. Example: Seagate invested in the 5,25 disk technology. This led to considerable improvement of the technology and to a considerable improvement of sales. 4. New companies are started up (by ex-employees of the traditional companies) and markets for the new technology emerge by trial and error. Example: ex-Seagate people started up Corner Peripherals. This company focused on the small emerging market for 3,5 inch disks. In the beginning this was only for the laptop market. 5. The new players move up in the market. The performance of the new technologies gets better after some time, enabling them to compete better and better with the traditional companies and products. Example: the performance of the 3,5 disks improved drastically. The 3,5 inch disk moved up in the market, to the personal computer market. Corner pushed Seagate out of the PC market for 3,5 inch disk drives. 6. Traditional companies try to defend their market position and to get along in the new market. Often they notice that they have fallen behind so far, that they cannot keep up. Example: Seagate did not succeed in capturing a significant part of the new market for 3,5 inch disk dri

Published by Thriftbooks.com User , 20 years ago
This book clearly deserves more than five stars. It has positively influenced more technology executives than any other book.The book does a wonderful job of explaining how traditions, bureaucracy, disbelief about the potential of new technologies, and misconceptions about the market hurt companies. Professor Christensen is a Boston Consulting Group alum, as am I, and that firm has been very interested in the question of why dominant firms lose out to new entrants featuring innovative technologies. Professor Christensen has written the best work on this subject that it has been my pleasure to read. Unlike most academics, he is rigorous without being dull or irrelevant to those who must operate businesses. I particularly found his exploration of the differences between a sustaining and a disruptive technology to be very useful. His insights into how accounting and financial concerns can "stall" organizational progress were also valuable. His cases (especially the hard disk ones) accurately capture many of the classic "stalls" that delay organizational progress. For example, tradition says that everyone focuses on serving the current customers. That's where the bread and butter are. Also, the overhead structure is established to serve those current needs. Both perspectives no longer serve when a disruptive technology is involved, and he persuasively argues that being first with disruptive technologies is usually very important. Bureaucracy comes into play because the authorization process requires a lot of confidence by those who will bet their careers that the market and financial projections will be achieved. The bureaucracy also increases the likelihood that an error will be made, or an unnecessary delay will occur. Disbelief comes from the tendency to misdefine who the customers will be and to underestimate the long-term potential of the technology. Professor Christensen puts in some nice technology development/time charts in to show how to better anticipate a new technology expanding from a lower need-defined market into the mainstream market. Misconception comes in because people misunderstand the danger of the disruptive technology, and how to manage it. THE INNOVATOR'S DILEMMA is very hepful here because it provides a model of best practices to cure the misconception stall here. Three other stalls are often important: Procrastination (delaying when delay is costly); Ugly Ducklings (avoiding what is unattractive, physically or financially); and Communications (not getting the message or not understanding the message). I suspect all 3 play a big role in the cases here, but I could not tell from the way the cases were written. I hope in his future work, Professor Christensen will also tie his thinking into the idea of innovation itself. I personally favor an 8 step process for improving innovation. One, measure everything you can in an area to understand how the measurements can help you improve. Two, apply the same approach to your most

Published by Thriftbooks.com User , 22 years ago
Along with Crossing the Chasm, this book will be a classic on managing innovation. Crossing the Chasm looks at innovation from the perspective of the upstart. The Innovator's Dilemma looks at it from the current market leader. If these two books don't get your entrepreneurial juices flowing, do something else.

Published by Thriftbooks.com User , 23 years ago
The Innovator's Dilemma offers a compelling explanation forwhy large and well-respected firms lose their dominant positionswithin a market, following what Christensen styles as `disruptive innovation'. Innovation takes two forms: sustaining and disruptive. Competition in oligopolistic markets is manifest in continuous product improvement, or sustaining innovation. This contrasts with a disruptive innovation, which fundamentally changes a product's nature, offering new functionality, although often at the expense of performance. Typically, when disruptive innovation occurs, incumbents will reject the new technology; where markets do exist for such innovative products, they tend to be small and offer slim margins. Despite this, the book cites evidence of upstart firms with a low cost configuration and lower profit expectations, which have successfully exploited these marginal opportunities. Refinement of the innovative product to a standard acceptable to traditional customers coupled with additional functionality enables the niche player to compete head on with established firms. They do so by pricing aggressively. Market incumbents typically respond by quickly incorporating the innovative technology into their products, only to find that they are able to make little impact in the developing new market (weak brand name) and cannibalise their existing customer base at lower margins. A new technology standard has been set. The few firms that have survived a disruptive innovation have embraced the new technology early and recognised the need for a different approach to operation within the market. This demands a different corporate mentality and ultimately, organisational design, which is only possible by establishing a virtually autonomous and sometimes geographically separate subsidiary. Eventually, this may reverse acquire the parent. The Innovator's Dilemma provides an interesting perspective on a seemingly recurrent problem. It does so in a fashion that is both insightful and easy to read. The main themes in the book are qualified with numerous examples and some rudimentary analysis, whilst avoiding being unduly repetitive.
Copyright © 2022 Thriftbooks.com Terms of Use | Privacy Policy | Do Not Sell My Personal Information | Accessibility Statement
ThriftBooks® and the ThriftBooks® logo are registered trademarks of Thrift Books Global, LLC