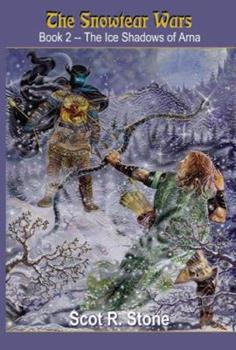 The Ice Shadows of Arna (The Snowtear Wars, Book 2)

Two years have passed since the great grassland war of the Waungee. Baron Oreus Blake and King Noran Yorokoh face one of their worst nightmares when those closest to them are taken prisoner by... This description may be from another edition of this product.

Another solid addition by Mr. Stone

Published by Thriftbooks.com User , 14 years ago
The Ice Shadows of Arna by Scot R. Stone is the second book in the Snowtear Wars. The first book being; The Chimes of Yawrana (The Snowtear Wars). This is a new series by a new author. As I said in my review of Chimes of Yawrana, being that Mr. Stone is a new author chances are most fantasy fans have not heard of him and thusly may be hesitant to pick up these novels. Fans of the fantasy genre should at least take a look at the first book as it seems to be a fair representation of what the series will entail. So far, this series is a solid addition to the fantasy genre as a whole. Unlike the first novel, Mr. Stone is not required to set up the majority of places, events, and people. This enables him to focus more on the plot and characters, instead of having to explain multiple things within one scene. There is a comfort that can be found with Mr. Stone's prose, he doesn't try to be overly flamboyant or wordy. He obviously has a story to tell and just seeks to get his vision across to the reader. From reading the first two books in this series, I can say that Mr. Stone does a fantastic job of conveying his image of this story. The plot of this novel takes up two years after the events of book one. The preceding two years were relatively calm and serene. However, events quickly occur that throw the region into a state of flux. There are actually several plot arcs within this book; Oreus Blake, King Noran and a small group of men go on a trek into the frigid wastelands of Arna to search for those closest to hem who have been kidnapped, there is the mysterious Black fever that is spreading across the territories, and the death of three of the elders as a result of a massive fire. There three major events, as well as smattering of smaller ones, creates many interesting story lines and plot points. Once again Mr. Stone does a very good job of weaving the multiple plot lines together to create a concise novel. Each one of the three major plot points could have easily taken up an entire novel. Yet, Mr. Stone does a good job of keeping them tight and not letting the story get out of control. Some fantasy authors seem to think that fans always want to read 900+ pages novels. This novel, even with all the plot points, only amounts to 484 pages which is just about right for this book. The old adage less is more, certainly applies to this scenario. For the most part the characters in this book are largely the same ones as the first book. There are a few new characters added, but fans of the first book will certainly find many familiar faces within these pages. A benefit of reading additional books in a series is that the author does not have to invest as much time explaining the characters. Rather, they are allowed to jump right in and further develop characters. One of my most positive aspects of the first book was that he characters were engaging and Mr. Stone did a good job of defining each character as their own entity In the first book's review I ev

Published by Thriftbooks.com User , 16 years ago
I loved the continuation of the characters, and meeting new ones after Chimes of Yawrana. I had been waiting for the second book to come out and I was not disappointed! Forget house chores and adult responsibilities--grab the book and read about Noran, Jada, Rydor, and Oreus. You'll enjoy every minute.

Scot Stone does it again.

Published by Thriftbooks.com User , 16 years ago
This is a BIG novel. Awesome and vast are two words that kept coming to me as I read Scot R. Stone's second novel, The Ice Shadows of Arna. It is a welcome addition to the world not just of fantasy adventure fiction, but of excellent story-telling in general. A strong group of fierce heroes (male and female), loyal friends and treacherous enemies, fantastic settings, unusual creatures (water gliders, leg stalkers, zeos and maddons, to name just four) all this and a fascinating, page-turning plot that just does not stop building in excitement until very last page of this large novel make this an even better read than Stone's first book in The Snowtear Wars series, The Chimes of Yawrana. That book was an impressive debut novel, well worth reading, and this second novel proves it was no accident. Scot R. Stone bids fair to become one of the major voices in the field of fantasy adventure writing, so get yourself a hot cup of chocolate, coffee or tea (something to keep you warm) as you travel through The Ice Shadows of Arna.
Trustpilot
Copyright © 2022 Thriftbooks.com Terms of Use | Privacy Policy | Do Not Sell My Personal Information | Accessibility Statement
ThriftBooks® and the ThriftBooks® logo are registered trademarks of Thrift Books Global, LLC