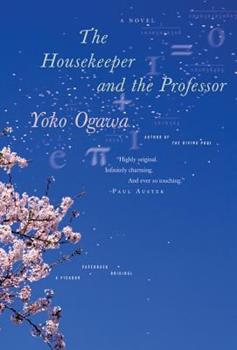 The Housekeeper and the Professor

Yoko Ogawa's The Housekeeper and the Professor is an enchanting story about what it means to live in the present, and about the curious equations that can create a family. He is a brilliant math Professor with a peculiar problem--ever since a traumatic head injury, he has lived with only eighty minutes of short-term memory. She is an astute young Housekeeper--with a ten-year-old son--who is hired to care for the Professor. And every morning, as the...

I was so surprised! This book is so good!

Published by Lindsay , 10 months ago
I'm on bedrest and needed a positive book. This book is the perfect balance of positivity and real life. I couldn't put it down and needed to know what would happen to all of the characters.

Published by Thriftbooks.com User , 13 years ago
Yoko Ogawa's quiet and insightful story, The Housekeeper and The Professor surprised me in several ways. For starters, I found myself transfixed by a story that relies heavily on two things I normally can't stand: math and baseball. These two subjects serve as metaphors in Ogawa's touching story about a young housekeeper, her memory-impaired professor client, and her 10-year-old son. Far from being cheap literary devices, mathematics - and to a smaller extent, baseball - form the basis of a strong bond between the three principal characters. All three are outcasts in their own way, and each possess some level of naive purity of character, which makes their ultimate friendship all the more touching. They are an unlikely trio, however the relationship that grows between them is as close as any family bond could ever be. I also didn't expect this little book to be so inspiring and influential. The Housekeeper and the Professor is a haunting, beautifully written tale that will cause the reader to consider what constitutes family and what life's obligations entail. Ogawa's portrayal of the professor is particularly moving. Injured in a car accident in the early 1970s, he has only 80 minutes of short-term memory and must re-learn relationships and basic information on a continual basis. A brilliant mathematician, he uses math as a primary means of communication - he is most comfortable when talking about numbers and has a gift for making the complex seem simple. While lacking in memory, he has a natural and instinctual affinity for children, and bonds instantly with the housekeeper's son. The boy's presence helps to bring the professor out of his insular world - in fact the child is the only thing that the professor seems to care about beside his beloved prime numbers. The two bond over math, and later baseball, and their relationships nurtures and enriches both of their lives, as well as that of the housekeeper. Ogawa's mastery at creating deep, multi-dimensional characters is all the more fascinating in this story because the reader never actually learns the subject's names (save for a curious nickname given to the boy by the professor). The reader is able to easily get to know the characters and feel empathy for them without knowing their names. The story transcends the need for names - in fact, I didn't notice the lack of given names until I was halfway through the book. Rather than focuses on something as mundane as a name, Ogawa chooses to give her readers a glimpse of her character's psyches. She wants us to ponder why people they act as they do, what motivates their actions and decisions, and to wonder why certain events happen. Ogawa's writing style is subtle, elegant and multidimensional. The story transcends time and geography and is applicable to just about everyone. The Housekeeper and the Professor is a lovely, intriguing rendering of human relations and emotion that possess a calm dignity. Ogawa, who is wel

Published by Thriftbooks.com User , 13 years ago
This is an incredibly beautiful story of a housekeeper with a kind heart who recognizes the endearing and unique qualities of a professor, unappreciated and unwanted by many others due to a mental limitation, a memory of only 80 minutes. Through her patient and generous nature, the professor touches and enriches her life, and her son's, in a charming way, opening her eyes to discover beauty she never knew existed. I absolutely loved reading of the love and compassion she and her son develop for the professor and the unique way someone so unlikely touched their lives. At the heart of this book is the beautiful and intriguing nature of numbers, the professor's primary passion. Perhaps those with a true aversion to numbers would not appreciate the beauty of this book in the same way as those who can identify with the professor's interest. I give this book a glowing recommendation to anyone who is not number adverse. This is one of the warmest stories I have read in a long time. I have not been able to stop thinking about the sweetness of the story since I finished it a couple days ago. At the end of the book is a selection of discussion questions that would be fantastic to use for a book club. The questions are very thought provoking and I found helpful to appreciating the depth of the story even greater.

A Gentle Beauty of a Book

Published by Thriftbooks.com User , 13 years ago
"The Housekeeper and the Professor" is a remarkable book, by the Japanese author Yoko Ogawa, translated by Stephen Snyder. It tells the story of an intelligent, if uneducated young woman, a single mother working as a housekeeper to support herself and her ten year old son. She is sent to work for a man known to us only as the Professor (as she is known to us only as the housekeeper; and her son, only as Root, a nickname given him by the Professor; it is based on the square root icon, as the boy has a flat haircut.) The Professor was/is a brilliant mathematician, but a disastrous auto accident has left him without short-term memory: he can remember only the past eighty minutes. Still, he is able to work with numbers, and solve problems, and he teaches mother and son about these numbers: prime, amiable, and twin. They also discover that Professor and son have an abiding interest in baseball - the Japanese do famously love baseball, don't they, and it's all statistics - numbers--isn't it? Eventually the three form a close bond, and almost a familial relationship, despite their difficulties. And it is an important one: thanks to the power of this bond among the three, we must believe, the boy is able to achieve a higher level of education, with all its concomitant benefits, than was necessarily in the cards for him. The book gives us an excellent view of Japanese life, at a level and in a location no tourist and, likely, no expatriate will ever see. Of course, Out: A Novel, the only other Japanese book I have ever read, does this too, but the two books could not be more different. "Out" is memorable for its ferocity; "The Housekeeper and the Professor," for its gentle beauty. It's a book to treasure.

Published by Thriftbooks.com User , 13 years ago
Yoko Ogawa has created a simple yet powerful story in The Housekeeper and the Professor. Nothing about the book is elaborate. This is a novel without extraneous characters, plot twists, or grandiose prose. A mathematics professor loses his short term memory in a car accident and can't remember anything for more than 80 minutes. Despite this impediment, his housekeeper and her son become deeply attached to the man, and the three form a connection based on the elegance and beauty of mathematics. Ogawa explores the meaning of friendship and the wonders of some of the most simple mathematical truths. You don't need to love or excel at math to appreciate this book, but if you do, you'll almost certainly relate to the professor's passion for math. If you've never liked math, you can easily be drawn into the housekeeper's sense of awe as she discovers more and more about the seemingly magical nature of numbers. Either way, the friendship between the professor, the housekeeper, and her son is touching and believable. I think everyone should give this book a try; it's spartan nature makes it easy to read, and the story makes it worthwhile.

Published by Thriftbooks.com User , 14 years ago
The trouble with writing a review of this book is that I have just finished reading it but I am certainly not finished thinking about it. The Professor suffered a brain injury which limits his short term memory to 80 minutes. His long term memories end on the day of the auto accident. The Professor thinks nearly exclusively about number theory, the rarely practical, elegant study of numbers themselves and their relationship with one another. The Housekeeper begins as a young mother merely trying to survive and raise her son with dignity. The story, on the surface, is the improbable family that arises, the odd but intense bond that grows between the three. The Professor's emotions are childlike and his love of children is intense. That present, immediate love showers over the Housekeeper's son, called "Root" by the Professor, helps the boy to grow and teaches the Housekeeper how to better love her child. Root and the Professor love baseball even if the team they root for are from different eras, and they form a bond that the lack of common memory cannot impair. The Housekeeper becomes fascinated by the elegance of numbers and by baseball. She is a better mother and a fuller person as a result of both. The characters are changed over time--except perhaps the professor: how can you change if you have no memory? Like most books by Asian authors I have read, the language and story is beautifully spare, clear and relies on inference. Yoko Ogawa, and her translator, leave a lot of room for readers to reach their own conclusions (how can the Professor's love for the child be personal if he cannot remember the person?) There is discussion of theorems and formulas, with the proofs shown on the page. I am not drawn to number theory but the same spare elegance of the numbers inform the story. The rarity of prime numbers in really big numbers suggests the rarity of perfect moments in the course of a long life. Perhaps the joy of discovering a large prime is analogous to the joy of the rare but perfect moments of our lives. Perhaps I'm full of it, too. But because of what is not said, the reflective reader finds herself staring into the distance, thinking about the book (imagine being a child greeted with new joy and respect daily? What does that do for a child?). The Housekeeper and the Professor invites the reader to become engaged in a broader way than is possible in merely telling a tale. Another reviewer said this is the sort of book published for the love of good writing and that is not likely to be made into a made for TV movie, and he's right. Its 180 pages goes by very quickly unless you pause to think through some of the formulas as math (I did not)rather than as literature (I did). How can formulas be literature? It's that kind of book, perhaps taking you where you have not been before and blending the authors thoughts with your own. Other readers will ask different questions as a result of reading it. It is very hard t
Trustpilot
Copyright © 2022 Thriftbooks.com Terms of Use | Privacy Policy | Do Not Sell or Share My Personal Information | Accessibility Statement
ThriftBooks® and the ThriftBooks® logo are registered trademarks of Thrift Books Global, LLC