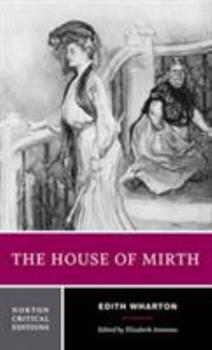 by Edith Wharton and Wenzell A B Ill

The text has been introduced and thoroughly annotated by the editor for student readers. Backgrounds and Contexts includes selections from Edith Wharton's letters; articles from the period about etiquette, vocations for women, factory life, and Working Girls' Clubs; excerpts from the work of contemporary social thinkers including Thorstein Veblen, Charlotte Perkins Gilman, and Olive Schreiner; and a consideration of anti-Semitism at the turn of the...

Published by Thriftbooks.com User , 12 years ago
America and Europe of the 1800s were stiff, gilded, formal place, full of "old" families, rigid customs and social transgressions. Especially for women. And nobody chronicled them better than Edith Wharton, who spun exquisitely barbed novels out of the social clashes of the late nineteenth century. "The House of Mirth" is one of her darker stories, where scandals and lack of conformity trigger a tragic downward spiral for a vibrant woman. Like most not-so-rich women, Lily Bart is on the prowl for a marriage to keep her in luxury and affluent circles. What's more, she has a rapid intellect and striking looks, but she is also a habitual liar who defies society's strictures (she gambles and smokes). Her only friend is Lawrence Seldon, but she is determined not to marry for love alone. Unfortunately, her schemes and plans start to collapse -- her adoring suitors either aren't rich enough, or her independent spirit sends her off. Her desperation becomes even more intense as she finds herself in the thick of a scandal, spun up by a malicious society matron to cover up her own affair. With her reputation in ruins, Lily's life spirals down into a new life of unemployment, poverty, and the final tragedy. Edith Wharton always paid a lot of attention to a woman's restricted life in the Gilded Age, and how scandals, unconventionality and society's hypocrisy could ruin them. But "The House of Mirth" pays more attention to this than most -- it's a bleakly realistic story, unflinchingly showing Lily's slow descent into miserable loneliness. Despite that, Wharton's writing is pure flowering poetry with a knack for evocation ("Her small pale face seemed the mere setting of a pair of dark exaggerated eyes"), and has a sensual quality with all the descriptions of silks, plants, soft light and luxurious mansions. And she vividly portrays the upper echelons of New York society at the time -- affairs, gossip and gilded salons -- as well as the restricted lives of women But Wharton is just as capable of describing the darker, sadder world that Lily falls into ("... blurred the gaunt roof-lines, threw a mauve veil over the discouraging perspective of the side streets"). Sedoesn't pull any punches with the tragic finale, which has a distinct air of inevitability about it -- no fairy-tale last-minute save by a Prince Charming. Lily starts out the book as a glimmering satellite of society, who can be rather selfish and cruel, but who nevertheless gains some sympathy because she just doesn't deserve everything that happens. The cruel, glittering society of the time had no room for women who stood outside the lines, and Lily's slow downward spiral is an illustration of this -- she's driven into miserable poverty and drug addiction. Lovely. "The House of Mirth" is anything but mirthful -- it's the study of a woman's slow downfall, and the cruel society that left her friendless and disgraced. Haunting and vivid.

"Is there any test of genius but success?"

Published by Thriftbooks.com User , 15 years ago
Published in 1905, The House of Mirth offers a blistering social commentary on the lifestyles and behavior of super-rich society. Having grown up in this society, Wharton evaluates it here as an insider, and her trenchant observations give this early novel a liveliness and verisimilitude not characteristic of "aristocratic" novels written by outsiders. Set at a time in which the old, moneyed aristocracy was being forced to admit newcomers who had made their recent fortunes through industry, the novel shows moneyed society in flux, the old guard ensuring their exclusivity against parvenus who are not the "right type," at the same time that their sons and daughters were often securing large fortunes through marriage into some of these new families. Lily Bart, a beautiful young woman of good family whose father lost everything when she was only nineteen, is left dependent on wealthy relatives in this society until she can charm a financially secure suitor into marriage. At age twenty-nine, she is no longer a debutante, and the pressure is mounting for her to marry, though she lacks the unlimited financial resources of social rivals. Still, her wit and charm make her a delightful companion, and she is never at a loss for suitors. Intelligent enough to want a real marriage and not just a merger between families, she has resisted making a commitment to date, though the clock is ticking. As Lily tries to negotiate a good marriage and future for herself, she is aware that the competition is fierce. Women "friends" pounce on the latest gossip and spread rumors to discredit rivals, and Lily's reputation is tainted with hints of impropriety. Her opportunities for a good marriage begin to dwindle, and when her aunt, Mrs. Peniston, dies and leaves her a bequest that covers only her debts, Lily is no longer able to compete in the society so attractive to her and begins her downward spiral. Author Edith Wharton creates a complete picture of turn-of-the-century New York society and its "important" people--their lack of morality, their opportunism, their manipulations, and their smug self-importance, characteristics one may also see in Lily when she is part of this society. But Wharton also shows how quickly a woman may become an outcast when the money runs out and she is thrown on her own resources without any training for any other kind of life. A well-developed melodrama filled with revealing details, this novel established Wharton's reputation as a novelist/commentator on the manners and morals of high society and those who would participate in it. Mary Whipple

The House of Typos

Published by Thriftbooks.com User , 17 years ago
I'm not going to comment on the novel itself here. I'm just wondering whether they have proofreaders up at Barnes & Noble Classics. I love the return of inexpensive mass paperback editions of classic literature, but you shouldn't have to put up with a shabbily prepared text just because you don't want to - or can't - pay the price of a trade paperback or hardback volume. This thing is lousy with typos. It's a disservice to readers and to Wharton herself.

Published by Thriftbooks.com User , 20 years ago
I stumbled upon a review of the recent film of THE HOUSE OF MIRTH in the TLS and, in order to have the novel firmly fixed in my mind (that is, before the lush, seductive images of film forever eradicated Wharton's novel from me) I dragged my copy off the shelf for a re-read. It had been 16 years since I last read of Lily Bart and her life, and I didn't realize how much I had missed her. For me, this is one of the great reading experiences, one of a handful that make reading a book the deeply moving and human exchange that it is. Despite the distance of wealth, property, time and manners, Wharton manages to make Lily's world and life palpable to anyone who will listen. The clash of money, morals, personality and circumstance is infinitely developed and played out in front of a never fading natural world. Once again, I was deeply moved by Lily Bart and at the end, felt I had lost someone myself.
Copyright © 2020 Thriftbooks.com Terms of Use | Privacy Policy | Do Not Sell My Personal Information | Accessibility Statement
ThriftBooks® and the ThriftBooks® logo are registered trademarks of Thrift Books Global, LLC