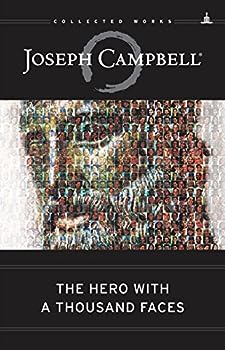 The Hero with a Thousand Faces

Since its release in 1949, The Hero with a Thousand Faces has influenced millions of readers by combining the insights of modern psychology with Joseph Campbell's revolutionary understanding of... This description may be from another edition of this product.

This book changed my perspective on "Life, the Universe, and Everything"

Published by Thriftbooks.com User , 15 years ago
Wow. Now that I've read this book I can't believe that I'd never heard of Joseph Campbell before. I started this book slowly, taking in the general idea and getting the point Campbell is making: all myths, religions, epic tales, etc. follow the same basic over-arching pattern. The pattern is plotted out in extreme detail in the book, so I won't go into it here, but it is spot on. Anyone who has any interest in religion, philosophy, psychology, or the human condition needs to read this book. ALthough it starts out a bit slow and self-evident, by the end you realize that you are reading a book written by a true master teacher. Campbell's clearcut objective explanations are superb and unarguably true. Using examples from the Bible, the Iliad, the Koran, native American folklore, Hindu tales, fairy tales, Eskimo tales, Chinese legends, African tribal rituals, and too many more cultural tales to mention, Joseph Campbell definitively lays out the monomyth and its structure. The beauty of Campbell's writing is how it sneaks up on you. I was following the general theme of the book and feeling as if I was learning something until around the middle of the book it all clicked. This book is not just about myth, philosophy, or religion, it is about mankind's constant struggle to nail down and explain the human condition. What troubles us is that we can't ever do it. For this reason, in every culture, there is always a hero story. A hero story that describes the life and adventures and discoveries of one man who broke through the confusing walls of this world we live in and became truly enlightened. What makes this book so perfect, though, is the painstaking detail with which Campbell recounts different parts of different myths, religious tales, legends, and folklore to illustrate the "monomyth" that all these stories are telling. Be sure to also read the footnotes, as valuable information and references to other interesting novels are often found there as well.

Living life as a hero's journey.

Published by Thriftbooks.com User , 21 years ago
A friend encouraged me to read this book. He said it marked a turning point in his life, prompting him to pursue his path as a writer who remains unpublished. The premise of Campbell's 1949 classic is that although the hero has many faces--Jesus, Buddha, Hamlet, Cuchulainn, Job, Dante, Moses, and Krishna, for example--the hero's journey follows the same basic path: departure (pp. 49-96), initiation (pp. 97-192), and return (pp. 193-244). The hero "is the man or woman who has been able to battle past his personal and local historica limitations to the generally valid, normally human forms. Such a one's visions, ideas, and inspiration come pristine from the primary springs of human life and thought" (pp. 19-20). The hero's journey may begin with "a blunder" (p. 51) that draws him out of his commonday life to the threshold of adventure (p. 245), where he is tested by "unfamiliar yet strangely intimate forces" (p. 246). The hero who "steps an inch outside the walls of his tradition" (p. 83) onto "The Road of Trials," descends "either intentionally or unintentionally into the crooked lanes of his own spiritual labyrinth" (p. 101). He then returns from that "mystic realm into the land of common day . . . where men are fractions of themselves" (p. 216).The symbolism of this mythological journey has a psychological significance (p. 255), and Campbell observes that we may use myths as a way to become more human. "The agent of breaking through personal limitations is the agony of spiritual growth," he writes. "Art, literature, myth and cult, philosphy, and ascetic disciplines are instruments to help the individual past his limiting horizons into spheres of ever-expanding realization. As he crosses threshold after threshold, conquering dragon after dragon, the stature of the divinity that he summons to his highest wish increases, until it subsumes the cosmos. Finally, the mind breaks the bounding sphere of the cosmos" (p. 190).Although Campbell recognizes "there is no final system for the interpretation of myths, and there will never be any such thing" (p. 381), he also observes that "the function of ritual and myth is to make possible, and then to facilitate, the jump--by analogy" (p. 258). Myths may be used as "mere symbols to move and awaken the mind, and call it past themselves" (p. 258). These symbols "are only vehicles of communication; they must not be mistaken for the final term, the tenor, of their reference" (p. 236).Campbell's book is a fascinating eye-opener. I read it as a reminder that life should be lived with a sense of heroic adventure, and that each of us should make our own journey through life, rather than treading someone else's path. "It is not society that is to guide and save the creative hero, but precisely the reverse. And so every one of us shares the supreme ordeal--carries the cross of the redeemer--not in the bright moments of his tribe's great victories, but in the silences of his personal despair" (p. 391).

Published by Thriftbooks.com User , 22 years ago
All may roads may lead to Rome, but for me, this year, all books seemed to lead to Joseph Campbell's Hero With 1000 Faces. I have discovered that this book is probably one of the most influential, widely read books of the 20th century. It's no wonder the author, Joseph Campbell, was featured in a Bill Moyers special on The Power of Myth (with an accompanying book, as usual for Bill Moyer's specials.) I was reading books on writing-- on story structure-- Particularly, Christopher Vogler's excellent Writer's Journey, and it was based on this book. Ironically, I was already reading another of Campbell's series of books on myth. But then I started looking deeper into this realm-- the idea of the Hero's journey, -- the call to adventure, refusing the call, finding a mentor, encountering threshold guardians, crossing the threshold, facing the worst evil, winning the elixir--- and I discovered that dozens of books have been written about the concepts Joseph Campbell first broached. It's such a powerful idea, and so useful in conceptualizing life's changes. I used it as an element in a presentation I just gave this past weekend on how the art and science of story can be applied to healing and helping people grow. 80% of the people attending the lecture were familiar with the concept. This is such powerful material, you might consider essential for helping you understand the way movies are made, and how the contemporary world has been affected by advertising and the loss of sacred rituals in everyday life. One way I gauge a book is by how many marks I make in the margins, to indicate wise ideas or quotable material ( I collect quotes, and quotation books big-time, owning over 400 quotation books) and this book's margins are just packed. The depth of knowledge in mythology and anthropology is awesome, providing a wealth of examples, metaphors, ancient stories and myths which deepen your understanding of human nature. The only problem with this book is how often, in conversations, I've found it to be relevant, whether talking about a friend who is going through some tough times, or someone who is making some changes in his business. Rob Kall

One of the most significant books of the 20th century

Published by Thriftbooks.com User , 22 years ago
This is an extraordinary text. What some of the other reviews suggest is that it is to be avoided if you think it will be an escapist treatise bridging the worlds of myth and fantasy. IF YOU EXPECT THIS TO BE LIKE STAR WARS DO NOT READ THIS BOOK. It is a journey to your own personal experience, as well as an exploration of the universal experience. It touches on our deepest fears and needs. It says much about our lives, our religions, and our civilisation. It is a sister text to Jung's autobiography. I found it gave me unique insights into my life, in all our heroic voyages, showing myth not to be the realm of fantasy, but of deep psychic truth. If this interests you read this, read Jung, and read The Marriage of Cadmus and Harmony, by Roberto Calasso.

A landmark of 20th century literature.

Published by Thriftbooks.com User , 24 years ago
Joseph Campbell was one of the great souls of our age. I've read this book twice, first on my own and the second for a class in "Myth, Religion & the Mythic Imagination." I read the paperack to tatters, literally, marking each illuminating, exhilirating insight. "Dry"? "Not a fun read"? What book did YOU read? Campbell is unlike other writers on myth; he looks not at an entire myth but at its parts. By the end of the book, he has essentially created the Ultimate Hero Myth, which takes bits of every hero myth from virtually every culture (heavy on Native Americans). Campbell was not a dispassionate academic--this was his gospel, and he lived by it. This book is alive and inspiring like no other book I know. One unique aspect of it at the time it was published was its approach to Christianity. For Campbell, Christ's life had to be seen as a myth. Before him, most Western scholars wouldn't have dare to say such a thing. Others had written on that, but in a skeptical manner. Campbell's view is that the Virgin Birth, miracles, Resurrection, etc have meaning only because they ARE myths. Look, there'd be no "Star Wars" without this. No "Sandman" comics from Neil Gaiman. No "Watership Down." This book is for the intellectual who wants to LIVE, not just to sit sterile at the desk. Recommended like mad.
Trustpilot
Copyright © 2022 Thriftbooks.com Terms of Use | Privacy Policy | Do Not Sell or Share My Personal Information | Accessibility Statement
ThriftBooks® and the ThriftBooks® logo are registered trademarks of Thrift Books Global, LLC