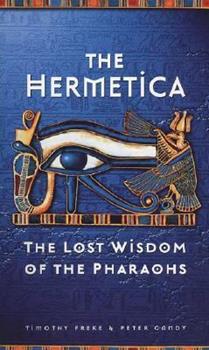 The Hermetica: The Lost Wisdom of the Pharaohs

by Tim Freke and Peter Gandy

The Hermetica is the first easily accessible translation of the forgotten Egyptian classic that inspired some of the world's greatest artists, scientists, and philosophers, including Blake, Newton, Raleigh, Milton, Shelley, Shakespeare, Botticelli, Kepler, da Vinci, and Jung. Influencing the Egyptians, Greeks, and much of Western thought, this work is credited to Hermes, an ancient Egyptian sage who lived around 3000 B.C. and so revered that he was...

Published by Thriftbooks.com User , 16 years ago
Those who tend to disparage the value of this book are doing a disservice to those of us who want to know more about hermeticism and the hermetic tradition and are new comers to this area. Mr. Freke in his introduction clearly states how influential these writings have been. Yes this was written in late antiquity but it incorporates many teachings that would have come from the Mind of Thoth. This book serves as an ideal introductory book for furthur explorations into the hermetic tradition.

Published by Thriftbooks.com User , 21 years ago
I was wary of this book when I first purchased it, but to my delight it turned out to be the best introduction to the Hermes/Thoth literature available. Beyond the value of its clear and readable presentation of some of the oldest wisdom tracts in the Western World, the authors also briefly touch on the provinence of the works. Because the Hermes Corpus was declared a fraud in the 17th century, the heavy lifting required to point out that they are not is simply beyond the scope of this volume. But any reader who is intrigued by the material can go on and discover for themselves the story of Hermes and make their own judgement. I place the rediscovery of the Hermes Corpus on the same level as the Dead Sea Scrolls and the Nag Hammadi texts, so this fine introductory volume should be considered by anyone interested in ancient literature and spirituality.

This little book will shake you awake.

Published by Thriftbooks.com User , 21 years ago
"...I, Thrice-Great Hermes, the first of men to attain All-Knowledge, have inscribed the secrets of the gods, in sacred symbols and holy heiroglyphs, on these stone tablets, which I have concealed for a future world that may seek our sacred wisdom."Fast-forward 5000 years, to that 'future world'. These sacred writings, among many others, have been returned to us, presented in a poetic manner which invites revisiting again and again. The teachings of Hermes, although ancient, reveal a Divine Order beneath the noise and bustle of our present world. Get quiet. Put some Space music on. Tuck in to this little book, and let it work on your mind and heart and Awaken you, too.

Published by Thriftbooks.com User , 21 years ago
I found this an interesting book. It begins with a history of the Hermetica, which is an ancient Egyptian religious/philosophical work, which gives an insight into the nature of God Man and the Universe. The analogies are very easy to follow and understand and give a new insight into what it's all about, and often fills many blanks left by other religions. The history also relates how the Greeks adopted the teachings and how during the last several thousand years the work has resurfaced from obscurity many times and each time caused a renaissance and advancement of mankind. The original Hermetica is then presented in a condensed form which is designed to be easily read and accessable. This is a good method as it gives the reader the main ideas and if they like this form of philosophy they can then read the entire book Corpus Hermetica which is the whole teaching. Despite being Egyptian texts, they predate the Isis/Osiris religion and are monothesist. It is surprising that few people are aware of the Corpus Hermetica which also predates the bible and old testament. Many ideas in more than one religion can be attributed to having roots in Hermetica. It is only beaten into first place as the oldest religious texts by the epic of Gilgamesh. Whilst many occult groups are referred to as being Hermetic, this does no justice to Hermetic thought which is easily compatable with most religions.5 stars for making Corpus Hermetica easily accessable to the reader.

Published by Thriftbooks.com User , 22 years ago
The book is very easy to read and follow: which is the intention of the authors. The chapters are excellently introduced and short. I liked also the authors arguments that the Hermetica is an ancient Egyptian wisdom, and NOT Greek. Hermes is a Greek god equated to Tehuti: Tehuti (Egyptian) is the author of the "Hermetica", who is also called Thoth, or Hermes. The focus of the book is on the origin of existence and its intricacies. A good summarized book on Hermetic wisdom.
Trustpilot
Copyright © 2022 Thriftbooks.com Terms of Use | Privacy Policy | Do Not Sell My Personal Information | Accessibility Statement
ThriftBooks® and the ThriftBooks® logo are registered trademarks of Thrift Books Global, LLC