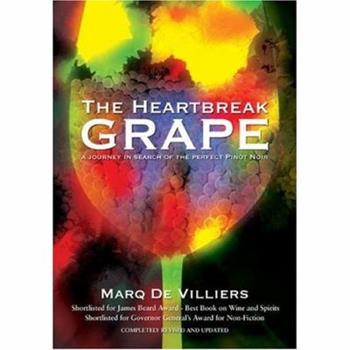 The Heartbreak Grape, Revised and Updated: A Journey in Search of the Perfect Pinot Noir

DeVilliers' quest for the 'heartbreak grape' begins with one sip of the superlative Calera Jensen '87. Behind the scenes of one of the world's most fascinating and romantic industries, the author celebrates the tenacity and invention of individuals who devote their lives to the magnificent obesession of wine-making in this completely revised and updated edition.

If you can get past the floral prose...

Published by Thriftbooks.com User , 11 years ago
in the first couple of chapters, this is a pretty good book about wine. The first few pages are a bit over-dramatized, but de Villiers soon finds his voice and it becomes quite readable. The book is effectively a history of Calera, and a case study in founding and starting a small winery, with a few detours into wine-appreciation. I particularly liked the ease with which de Villiers quotes Jensen and the notes from their conversations. All things considered, it's one of the most enjoyable gentle reads on wine.

Published by Thriftbooks.com User , 12 years ago
This is the book for anyone who is curious about growing grapes and making wine - not just Pinot Noir! It is well-written and thoroughly researched, but the best part is that the reader really gets to know Josh Jensen, an exceptional man and a true trail blazer in the California wine industry. It is even fun to read!

Well written and a pleasure to read . . .

Published by Thriftbooks.com User , 14 years ago
Here is a story well told. Marq de Villiers so enjoyed his chance encounter with a glass of Calera Pinot Noir that he found himself contemplating it throughout the evening it had been shared. He wondered if he could retrace the wine's history - from the winemaker's dream to make it up to the moment it was poured into the very glass set before him. The result of that resolve is this book - an engaging and entertaining journey to Mt. Harlan, the home of Josh Jensen's Calera Wine Company, and a chronicle of not only the wine poured into his glass, but of Jensen's long-endured struggles to make it. De Villiers did his research in 1991, and into late 1992, I believe, and the original book was published in 1993. I read the first edition only to find out that soon after I had done so, a completely revised and updated version would be released in late April `07. I was probably one of the first to buy it again. I had to see what had happened to Josh Jensen since then. Of course, I knew that he was still making wine, because I had been compelled to order half a case of his pinot after all I had read about it. Watch out, this book could cost you more than the $12.95 retail price - but no matter, the wine is awesome, I can assure you of that. The revised edition is more of the same, which is to say it's a very good continuation of a great story. De Villiers is reverent to the grape, to viticulture, to Josh Jensen himself, and to the wine he produces. He tells the story as much from Jensen's point of view as anything, but like a good photographer or film producer, he comes in tight on his subject and then backs off to show more of the entire landscape. You feel privy to the triumphs and setbacks that Jensen went through as a young man trying to find his land, lay out the vineyards, get water to his young vines, and then bring his wines to market. But de Villiers delivers more than that. He explains - in such poetic prose, why pinot noir is such an onerous varietal, and as he conveys that, you can't help but quietly sense that it is the perfect life's challenge for Jensen, who is quite a character himself. The book is an easy read but you'll find that you're learning about wine and its attendant culture in ways you might not normally have access. What you learn about viticulture, wine, and winemaking is passive and simply a byproduct of the story. It certainly beats reading textbooks. Well-written and researched books have that special something that makes them unforgettable. They're the kind that long after you've read that last page, you'll find yourself still thinking about it in unexpected moments. There are only a few that I place in that category personally, but seriously . . . for me, this book is one of them.

This is "A River Runs Through It" for wine lovers....

Published by Thriftbooks.com User , 21 years ago
What "A River Runs Through It" is to flyfishermen everywhere, "The Heartbreak Grape" is to viticulturists, winemakers and wine lovers. Simply put, it captures the entire winemaking experience clearly and poetically.The book begins in the golden hills of California, specifically in the cellar of the Calera Wine Company. Shortly thereafter it flashes back to a cozy December evening when South African Marq de Villiers attended a dinner party at Mount Vernon, New York. A cork was pulled by an unnamed host and wine was served without comment. "I remember that something struck me about its clarity, a brilliant red, like rubies under fire, and though my memory is probably colored by the warmth of the setting, I know I felt there was something...unusual...about it." The wine is Calera Jensen Mount Harlan Pinot Noir, 1987. The author continues by "...dipping my nose into the glass and inhaling slowly, then taking a small sip. It was rich and complex, with a maddening hint of chocolate and violets. I groped for descriptives, as wine people do, without much luck." What then follows is quite extraordinary. The author embarks on a journey west to California to discover how this exceptional bottle of wine came to be. But it is not just the story of a particular wine, it is the story of a particular grape, of a particular winemaker, of a particular way of making wine, of interventionist politics, of bureaucracies and critics and complex economics.... It is a broad canvas painted from a rich palette, and in the end the reader is delivered as the final arbiter of the art. This is a fun book to read. It is both revealing and irreverent. From the primogeniture system in Bordeaux to the endless subdivision of land in Burgundy, de Villiers slices through the layers of tradition and bureaucracy to find the wisdom and practices that have resulted in some of the finest wines the world has ever known. To this stage set Josh Jensen, a young American student who had only recently decided he really enjoyed wine. He travels to where the best wines are made, and begins his education by picking grapes. He hangs around the wineries and translates for non-French-speaking visitors. In the end, he learns the Burgundian style of winemaking and takes it back to the United States, where he finds himself at odds with the then prevailing high-tech methods taught at UC-Davis. What ensures is a 15-year struggle to find the right soil in the right setting to grow the right crop so he could make the right wine from the most fickle of wine grapes, the Pinot Noir--the heartbreak grape. The proof of his success is evidenced not only in the French delegations sent over to find out how he did it, but also--no, especially--in the wine itself.If you grow a few grapes, make some homemade wine, or simply love to drink the stuff, you'll enjoy this book.

A stylish and dramatic tale about a man and his grape.

Published by Thriftbooks.com User , 24 years ago
'The Heartbreak Grape' offers an intelligent and amusing look into the trials and tribulations surrounding one man's efforts to produce a domestic wine equivalent to the best Red Burgundies. Mr. de Villiers writes with wit and style, and his engaging commentary provides a sense of drama to the story. Unfortunately, Mr. de Villiers suffers the fate of many who try to decipher the egos, expectations, and experiences of those involved with the complex world of wine. Factual errors abound, ranging from the trivial (mistaking "sulfur dioxide" for "sodium dioxide") to the more disconcerting (as in Mr. de Villiers obvious mis-understandings about the role that science has played in assisting those involved in the production of fine wines). Too, his tendency to indulge in adulatory statements and his willingness to believe all that his protagonists tell him cause the book to, at times, read more like a PR publication than a reasoned view of wine production. In the final analysis, though, the sheer joy, excitement, and obsessiveness of the epic journey of Mr. Josh Jensen and his Pinot noir vines makes for tasty reading.
Copyright © 2020 Thriftbooks.com Terms of Use | Privacy Policy | Do Not Sell My Personal Information | Accessibility Statement
ThriftBooks® and the ThriftBooks® logo are registered trademarks of Thrift Books Global, LLC