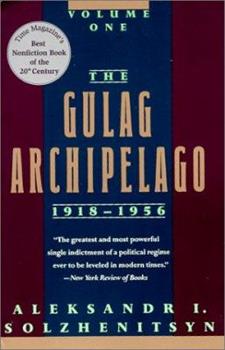 The Gulag Archipelago is Solzhenitsyn's attempt to compile a literary-historical record of the vast system of prisons and labor camps that came into being shortly after the Bolsheviks seized power in Russia in 1917 and that underwent an enormous expansion during the rule of Stalin from 1924 to 1953. Various sections of the three volumes describe the arrest, interrogation, conviction, transportation, and imprisonment of the Gulag's victims by Soviet...

One of the most important books ever written.

Published by Anonymous00100 , 1 year ago
A true indictment of the evils of Marxism and a look behind the Iron Curtain. Every human needs to read this book.

The Most Important Nonfiction Work of the 20th Century

Published by Thriftbooks.com User , 18 years ago
How thin is the veil we call Civilization!! This book is indeed a tedious read by virtue of its length. However, Solzhenitsyn's history is written with the prosaic style of a Tolstoy or Dostoyevsky. Aleksandr Solzhenitsyn was a Captain in the Soviet Army as it charged through Nazi occupied Poland when he was arrested on trumped-up charges in February 1945. Thus began his odyssey through Gulag, "the country within a country". The perpetually weak economy of Communism could not survive without the forced labor of millions of is own citizens who became prisoners for one reason or another, or no reason at all. Solzhenitsyn relates his own experiences as well as those of other prisoners with whom he became acquainted while incarcerated. He relates how ordinary Russians were arrested and charged with fraudulent charges (if charged at all), interrogated, tortured and forced to confess under extreme duress, and sent off to labor for the good of the Motherland. Throughout the book, Solzhenitsyn asks the reader incredulously, "how did we let this happen?" That is no doubt one of the most important questions posed in all of human history. If we study history in order to prevent the repetition of our mistakes, then Solzhenitsyn's work should be required reading of all residents of Planet Earth.

Not a novel, an indictment

Published by Thriftbooks.com User , 21 years ago
The point can't be made forcefully enough: this book is *not* a novel! It is not even literature, in any meaningful sense. It is a 2,000 page indictment for crimes against humanity. Chief among the accused is of course Stalin who, if justice exists, is currently serving 60 million consecutive life sentences in Hell. But as Solzhenitsyn abundantly documents, the Gulag death-camps were part of Lenin's vision from the very beginning. (In January 1918, he stated his ambition of "purging the land of all kinds of harmful insects", in which group he included "workers malingering at their work".) But it is not only the architects of Bolshevism who stand accused. It is also all the collaborators with oppression, from the camp guards who summarily executed prisoners too exhausted to stand to the people who informed on their neighbors. Complicit even are the passive victims of the Terror who, as Solzhenitsyn says, "didn't love freedom enough" to fight for it from the beginning.Needless to say, "The Gulag Archipelago" is not beach reading. (Although Solzhenitsyn's searingly sarcastic style makes it anything but a dry collection of facts.) The evil that it obsessively documents is so dark that even reading about it is often difficult to bear. But anyone with pretentions of understanding the world we live in needs to go through it from first page to last.But if you aren't willing to make the effort, here's the lesson boiled down for you: Totalitarianism doesn't begin with a Stalin or a Hitler. It begins with *you*, on the day that you let a government become more powerful than the people it governs. Remember that or someday it might not be the Russians or the Jews or the Serbs that the men with guns come for. It just might be you...

Published by Thriftbooks.com User , 22 years ago
What ever faults "Gulag Archipelago" may have, it is a monumental and important work. For anyone who does not know the meaning of the title, "Gulag" is the Russian word for prison, and an archipelago is, of course, a chain of islands. The idea behind this is that the Soviet concentration camp system under Lenin and Stalin were like an island of prisons spread all over the Soviet Union. The content of "Gulag Archipelago" is quite extraordinary. Solzhenitsyn includes countless anecdotes of prisoners and their families in various phases of arrest, interrogation, imprisonment, slave labor, death, or release. He buttresses these stories with statistics, and with his own personal narrative of his years in the Gulag. The information in this book is simply staggering, not only for the cruelty and evil it describes but also the folly. The Soviet government murdered indiscriminately across all lines of race, class, and gender. In many cases, it murdered the most brilliant and productive members of its society--the very people who could have built it into something great.Many people take umbrage with Solzhenitsyn's style, which involves a lot of ranting and run-on footnotes. Personally, I find his narrative interesting and invigorating. Solzhenitsyn's narrative is vigorous, untrammeled and loaded with sarcasm. While many find this gimmicky or uncultured, it helped buoy me through the unbearable sadness of the book's subject matter.Obviously this book isn't for everybody and it requires a considerable degree of fortitude to get through it. But I think it is essential in all our lives to read this book or one similar to it.
Trustpilot
Copyright © 2022 Thriftbooks.com Terms of Use | Privacy Policy | Do Not Sell or Share My Personal Information | Accessibility Statement
ThriftBooks® and the ThriftBooks® logo are registered trademarks of Thrift Books Global, LLC