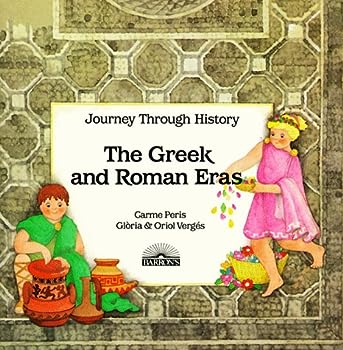 (Part of the Journey Through History Series)

by Oriol Verges and Gloria Verges

This description may be from another edition of this product. An illustrated history of the Greek and Roman eras, with a fictional story involving children to depict the time in history.

Touching on a few key issues for younger students of history

Published by Thriftbooks.com User , 15 years ago
The Journey Through History series consists of six books written for young readers that are designed to encourage their interest in the study of history. What is interesting about them is that they were originally published in Spain ("Edad antigua"), which provides for a slightly different perspective on the past that you get from American historians. Following "Prehistory to Egypt," this second volume is devoted to "The Greek and Roman Eras." The idea is that we groups of children, both then and now, in Athens and in Rome, groups who talk about topics of interest and significance. So in ancient Athens the kids learn about the "agora," Homer the potter, Greek schools, physicians, the Olympic Games, and Greek plays. Those in Rome talk about the Roman legions, the houses the wealthy Romans lived in, the Senate, the gladiators at the circus, and aqueducts. In each half of the book modern children visit ancient sites with their parents. The back of the book includes a guide for parents and teachers that focuses on the topics covered it the text, but with a contemporary rather than historical perspective (e.g., talking about Pierre de Coubertin and the modern Olympics). What you have here is a nice little supplemental volume to the study of ancient Greece and Rome in grade school. It touches on only a few topics for both, and not in any great depth, but the attempt is to focus on some defining elements of each culture and it certainly succeeds on that limited level. The other four volumes in the series are devoted to "The Middle Ages," "The Renaissance," "Modern Times," and "The Contemporary Age." All of the books are written by Gloria & Oriol Verges, with Carme Peris illustrating the even numbered books and Maria Rius providing the art the odd numbered ones.
Copyright © 2020 Thriftbooks.com Terms of Use | Privacy Policy | Do Not Sell My Personal Information | Accessibility Statement
ThriftBooks® and the ThriftBooks® logo are registered trademarks of Thrift Books Global, LLC