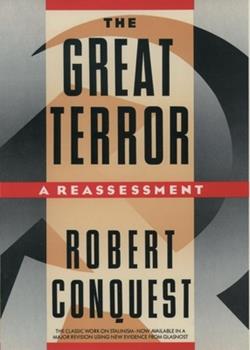 The Great Terror: A Reassessment

The definitive work on Stalin's purges, Robert Conquest's The Great Terror was universally acclaimed when it first appeared in 1968. Edmund Wilson hailed it as "the only scrupulous, non-partisan, and adequate book on the subject." George F. Kennan, writing in The New York Times Book Review,noted that "one comes away filled with a sense of the relevance and immediacy of old questions." And Harrison Salisbury called it "brilliant...not only an odyssey...

Published by Thriftbooks.com User , 14 years ago
Which is more terrifying? Stalin's 1936-38 terror, or Western liberals' inability to recognize it? Updating his original work "The Great Terror" with a vast amount of new data, Conquest scrupulously details and puts into context the purges themselves: the many players and defendants, the shifting political cross-currents, the rounds of trials and arrests. And he does the same for the many Western observers - intellectuals, writers, journalists, and left activists - who were oblivious to it or actively sought to hush it up, even decades later when there were no longer any shreds of doubt. This is the equivalent of Holocaust denial. And a Holocaust it was. While left-wing apologists pooh-poohed the numbers of purge deaths as in the thousands, the estimates of those killed politically in the people's progressive utopia are now solidly in the eight figures, with as many as 15 to 20 million arrested and executed, or worked to death in the camps, in the years up until Stalin's death in 1953. As many more died were starved by the Communists in the Ukraine to break the peasantry a few years earlier. Yet most people seem never to have heard of any of this. In the Terror itself, Stalin and the NKVD prosecuted fictitious espionage, sabotage and subversion charges against millions of people. Those arrested would be tortured until they agreed to confess and implicate others. Most did, and quickly. It wound down only when the NKVD saw that, mathematically, every citizen of the nation would soon be implicated. But it flared up periodically until Stalin's death in 1953. The purges served several purposes. They transformed the USSR from a dictatorship of the proletariat into Stalin's despotism. They removed most previous party members and high-ranking officials, suppressing alternate notions of what Communism was about, and replaced them with ruthless Stalinists. Those persecuted included those who had been non-Bolshevik leftists, even if they since had conformed; Bolsheviks who had subscribed to Lenin's agricultural compromise delaying collectivization to boost agricultural production; Trotskyites; and finally, Stalinists and the NKVD themselves, for no ostensible reason but merely to terrify and cow. Stalin meanwhile could blame the country's Bolshevik-destroyed economy on the fictional sabotage "confessed to" in public trials, or to foreign spies. And he could blame the purge's excesses on the NKVD itself. We see the breakdown of figures and how they were derived: those executed with or without trial, those deported to slave labor camps, those executed in the camps, and those merely worked to death within them. The death rate for those sent to slave labor camps was around 90 percent. There are some camps whose mere existence cannot be confirmed firsthand because no one is known to have survived them to give testimony. This is an essential part of the anti-Communist canon, certainly on the top shelf. Conquest's work here confirms his original book

Published by Thriftbooks.com User , 18 years ago
Let me begin by saying that Robert Conquest is an absolutely brilliant writer and scholar. I'd classify him as being at the top of our era's historians; which would put him alongside men like Anthony Beevor and Paul Johnson. I read this book about 10 years ago but studied it again this week. It is a concise account of one of the most horrific periods in the history of mankind. Few books will have the unexpected outcome of making you so grateful to live in the present age. Conquest is meticulous in his telling of the Yagoda/Yeshov/Beria schinas, and behind them all we find Stalin willfully exterminating his countrymen and consolidating his rule. No book that I've read has given a more thorough or readable accounting. I would give it 10 stars if I could. My only regret is that no photos were included. The rare photos offered in this year's "Stalin: The Court of the Red Tsar" really accentuated the text.

Published by Thriftbooks.com User , 19 years ago
Reading The Great Terror is an awakening awareness of mind-boggling inhumanity. To say that in the 1930s Stalin snuffed out twenty million of his citizens hardly begins to describe the essential evil of his rule, which caused indescribable suffering for countless millions more, not to mention plunged the world into war for decades. It's easily forgotten that the October 1917 coup by which the Bolshevik intellegentsia came to power lacked popular support and by 1921 had lost any semblance of representing the proletariat. From its inception, the party of Lenin and Trotsky embraced deceit, violence, and willingness to sacrifice others as a means to power, bringing Hitler later to say that unlike Social Democrats "he could always turn a Communist into a Nazi." Stalin merely took the context of intolerance to its logical extreme, plotting the decimation of his opposition into ever smaller groups, assisted by the very ones that would themselves successively be destroyed by it: Trotskyites, then Rightists, Bukharinites, Zinovievites, and finally the Stalinists themselves. The 1937 Plenum already marked the complete transformation into autocracy. Key to Stalin's success were his patience and that he never revealed (or tested) the limits of his ruthlessness. Rivals continually underestimated him: Trotskyites supported the disastrous 1930 agricultural collectivisation, miscalculating that he wouldn't dare another repression and the peasants would revolt-- but Stalin did impose an even worse famine two years later, starving an unimaginable 10 million Russians and Ukrainians. Supporters and opponents alike never held him personally responsible: even the Terror itself was called the Yezhovschina. Victims could be persuaded that the Terror was in the interest of Communism not Stalin, and it is to this day unknown whether Stalin himself believed it. His capriciousness and promises of leniency induced even high officials to produce confessions and denunciations, hoping that perhaps one more obscenity committed in his service might restore them to favour. At first, at least an actual crime and the formality of a show trial were needed. The fringe benefit of Stalin's assassination of Kirov was that other opponents could be executed for it. Convictions relied solely on confessions that were rather blatantly inconsistent and sometimes bizarre. Though brave individuals sometimes recanted at trial, they fell back into line after a short 'recess'. The rare evidence introduced that was actually verifiable was knowingly false: for example, the Copenhagen Hotel Bristol where Sedov had allegedly met had actually been demolished at the time. But full show trials were a luxury reserved for the Party elite. One court report simply read: "No prosecutor. No witnesses. No co-accused. No defender." The crimes themselves were soon completely fatuous. Article 58 of the Criminal Code outlawed "flight abroad," "lack of faith in the Socialist state," and fascinatingly "suspicion o

Published by Thriftbooks.com User , 21 years ago
When I read the first edition of this book back during the Cold War, it was difficult to believe the quality of scholarship and research effort that Conquest demonstrated throughout this book, written while the KGB was still running amok. What most general histories dismissed with a few sentences or paragraphs as "millions died or were imprisoned", Conquest gave us the names, the chronology, and the results of Stalin's paranoid Reign of Terror. Now that the archives have become more accessible, Conquest is able to update his work and further illuminate this darkest period of Russian (and perhaps world) history. ANYTHING written by Conquest is worth reading if you want to understand the workings of 20th century Soviet politics and society.

A shocking and compelling testament

Published by Thriftbooks.com User , 23 years ago
Written by one of the world's leading Sovietologists, this is a shocking documentation of Stalin's atrocities. As one who has studied and taught professionally in the area, I stand in awe of Professor Conquest's scholarship.
Trustpilot
Copyright © 2022 Thriftbooks.com Terms of Use | Privacy Policy | Do Not Sell or Share My Personal Information | Accessibility Statement
ThriftBooks® and the ThriftBooks® logo are registered trademarks of Thrift Books Global, LLC