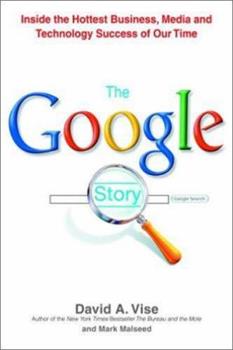 by Mark Malseed and David A. Vise

"Here is the story behind one of the most remarkable Internet successes of our time. Based on scrupulous research and extraordinary access to Google, the book takes you inside the creation and growth of a company whose name is a favorite brand and a standard verb recognized around the world. Its stock is worth more than General Motors' and Ford's combined, its staff eats for free in a dining room that used to berunby the Grateful Dead's former chef,...

Published by Thriftbooks.com User , 12 years ago
For a non-computer type, I thoroughly enjoyed this book and learning about Google. Easy to read, and gives a great historical perspective about the birth of the company. Have recommended this book to several friends.

nothing new but still fascinating

Published by Thriftbooks.com User , 13 years ago
The updated version for 2008 doesn't supply anything new other than a chapter on how much richer Brin and Page are, and a more useful chapter on future endeavours. However, if you didn't read the first edition, this is a must read story--especially ten years after the company's debut. As an avid business user of Google, I enjoyed reliving the memories of how simple concepts created millionairs of people like you and me...and how it still does if you just follow the simple plan the boys envisioned. Even this time around, I still found a couple of things I had forgotten that I immediately incorporated into my current webpage to ensure the googlebot liked me even more. And like clockwork, it worked immediately. If you're new to adwords or adsense, be sure to read the chapters on SEO; it's not as complicated as it seems. If you spend the time and build it properly...they will come! If nothing else, the updated release (as I'm sure it was intended) reminds the online businessperson that this is mandatory reading.

A useful refresher but very little that's not available elsewhere

Published by Thriftbooks.com User , 13 years ago
The Google Story: For Google's 10th Birthday made for very easy airplane reading on a cross country trip last week. The authors's styles very much reflect their newspaper training and experience, and to a certain extent, missing a bit of the tough editing one is used to during their day jobs. Nonetheless, it was fun to read a comprehensive review of what has become one of my favorite links online, and it reminded me of several of my own experiences along the way: -- Nine years ago folks on "The New York Times" Crossword discussion group had an intense debate over whether "google" could be used as a verb and whether it had to be capitalized -- that's an absolute non-issue today several billion searches later. -- In 1999 we tried to license the search engine for a Fortune 100 company; I now understand why Google down played that effort for a number of years and couldn't make a deal. -- The checklist of shortcuts was mostly old news, but a couple of the hints had value. -- Some of the beta features sound fascinating and once I had access to the Internet I signed myself up. Overall, for anyone who uses the search engine on a regular basis and reads about Google in the newspaper, there is very little new here. But it was fun to review the bidding and speculate a bit with the authors about the future. Robert C. Ross 2008

A really great read, or gift for the holidays!!!

Published by Thriftbooks.com User , 16 years ago
This is a very well-written and scrupulously well-researched account of the Google phenomenon. A great story of how two incredibly bright guys with a great deal of perseverance changed the world. It's filled with anecdotes and analysis that keep the reader intrigued from start to finish. Before reading this book, I never really understood how Google made money. I do now. Would recommend it to anyone looking for a great read for themselves, or a great gift for a friend. 5 stars!

Published by Thriftbooks.com User , 16 years ago
I picked this up hoping to learn why Google's stock price is over $400, and now I know. "The Google Story" reads like a thriller at times, at other times like an inspirational how-to manual for business success. And, the authors do a great job of humanizing this tale of technological and business success. This was a really great read.
Trustpilot
Copyright © 2022 Thriftbooks.com Terms of Use | Privacy Policy | Do Not Sell or Share My Personal Information | Accessibility Statement
ThriftBooks® and the ThriftBooks® logo are registered trademarks of Thrift Books Global, LLC