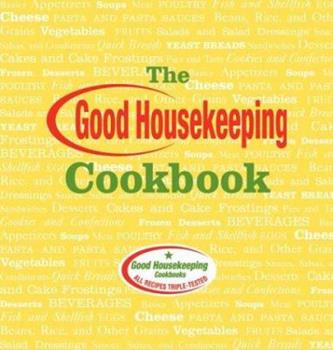 by Good Housekeeping and Susan Westmoreland

A really nice All-In-One Cookbook.. From Basics to Fancy

Published by Thriftbooks.com User , 13 years ago
** If you could only own one cookbook, this would be a good choice. ** Contained within this book are recipes that cover common breakfast items to mainstay supper foods to some really fancy dinner recipes. Breakfast items... For the beginning cook that wants to know how to make biscuits from scratch and not rely on canned biscuits, they have that covered. Also are recipes for French Toast and Omelets and Soufletts. Maybe these are to be expected but a lot of people enjoy these types of morning dishes but aren't sure exactly how to make them. *** Chicken recipes cover dishes that you probably have ordered at fancy restaurants but aren't sure exactly sure what is in them. *** Roast Peking Chicken, Chicken Cacciatore, Chicken Casserole, Chicken Gumbo, Thai Chicken, Chicken Teriyaki, Szechwan Chicken, buffalo wings etc. You get the idea. ** Seafood such as Swordfish, Halibut, Pan seared tuna, Catfish, Flounder, Salmon, Crab Cakes, Red Snapper, Clams, Oyster, Shrimp..heck, even Squid, all in here.** But it also has the sort of more common foods that most people eat more often such as your basic Chili, Fried Green tomatoes, Brownies, Home made Ice Cream and so on. Want to make a pie but you don't have a store bought pie shell? Relax, how to make a pie dough is in here. I could go on but things like Ox Tail Soup, all sorts of sauces, Roasts, Ribs, Pear, Plum or Persimmon dessert recipes, Assorted Pies, banana bread,.. well, you get the picture. So, the next time you are in the gracery store and are going to get whatever you need for one of the fancier recipes that I might not have mentioned, and you see an eggplant in the fresh produce section before you head on back to the Meat section, relax, and go ahead and pick it up and throw it in the cart also. Because you're covered with how to cook it with this book.

Published by Thriftbooks.com User , 14 years ago
If you want an everyday cookbook with all the basics of cooking, great recipies and cooking methods as wll, then the Good Housekeeping Cookbook is for you!

Great recipes- BUT exact copy of 2001 All New Cook Book!

Published by Thriftbooks.com User , 17 years ago
If you already have the 2001 All New Good Housekeeping Cook Book, save your money - this is a reprinting with a different cover and slightly heavier paper. Page for page, exactly the same.The 2001 book was excellent, though, and if you don't already own it this would make a great addition to your cookbook library.
Copyright © 2020 Thriftbooks.com Terms of Use | Privacy Policy | Do Not Sell My Personal Information | Accessibility Statement
ThriftBooks® and the ThriftBooks® logo are registered trademarks of Thrift Books Global, LLC