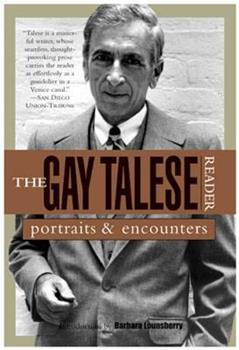 As a young reporter for The New York Times , in 1961 Gay Talese published his first book, New York-A Serendipiter's Journey , a series of vignettes and essays that began, "New York is a city of things unnoticed. It is a city with cats sleeping under parked cars, two stone armadillos crawling up St. Patrick's Cathedral, and thousands of ants creeping on top of the Empire State Building." Attention to detail and observation of the unnoticed is the hallmark...

Great stories by a great writer

Published by Thriftbooks.com User , 12 years ago
Very nice to read. I like the short story format because I can pick it up and read a story here and there. Very well written.

Published by Thriftbooks.com User , 15 years ago
This book was recommended reading for the Magazine Writing course I recently completed. It's by far the best set of written-for-magazine articles I've seen. In a world saturated by smarmy, self-important Rolling Stone articles, it's refreshing (stunningly so) to read what used to grace the pages of prestigious magazines. To read Talese's account of Frank Sinatra is a treat, most definitely. His use of detail and respect for his subject is astounding. Talese's own account of his life as as a shy tailor's son is meticulously written as well. This book is highly recommended for anyone who wants to see how compelling prose should be written.

Published by Thriftbooks.com User , 17 years ago
For a sweetly essential read this is a must. Profiling people like Muhammed Ali, Floyd Patterson, Joe DiMaggio, Peter O'Toole, Sinatra and his own grandfather, Talese unites the journalistic style he even writes about, with an attractive fiction-like narrative. I looked forward to reading this each time, and was captivated by the non-sequitor poetics of Mr. Talese. Highly recommended for being simple, active and care-full about it's subjects.

Published by Thriftbooks.com User , 17 years ago
"Intensely curious" is how Gay Talese describes himself on his arrival in New York City as a young man in the mid-1950s, a provincial from a community of immigrants in New Jersey. " But until I got a job in journalism I knew of no way to indulge my peculiar interest in the natural and unnatural order of city life."Talese's interest in the lifestyle of alley cats, the inside knowledge of doormen and charwomen and taxi drivers, and the various overlooked architectural marvels throughout the city was underappreciated by his bosses at "The New York Times." As punishment for his lackluster efforts on the Albany political beat, Talese was shunted to the obituaries desk. But to him it was an opportunity to write about the personal accomplishments of interesting people. "I was never happier," he says.Each of the superb pieces in this collection of writing from the 1960s to the 1990s exemplifies his elevation of curiosity to an art form. The opening piece, "New York Is a City of Things Unnoticed," his first article for "Esquire," in 1960, (and the opening of his first book, "New York: A Serendipiter's Journey") combines elements from a number of stories he had written for the "Times." Talese portrays the city's vastness and variety in a catalog of wonders and personal vignettes and portraits, from the gallons of soap used on a big day at Yankee Stadium to the doorman with parts of three bullets in his head, to a snapshot of the city during its quietest hour (5 a.m.).Many of these pieces are classic profiles of famous people. "Frank Sinatra Has a Cold," is a riveting portrait of a complex man at the center of his universe, not always comfortable, but always in command. For this piece - one of his most famous - Talese never spoke to the man, using only his considerable powers of observation and fleshing it out with brief interviews with family, friends, employees and fans.There are several profiles of prize fighters, including a particularly poignant one of Floyd Patterson after his loss to Sonny Liston, in which Patterson describes himself as a coward: "He stopped. He stood very still in the middle of the room, thinking about what he had just said, probably wondering whether he should have said it." Talese pursues the subject and Patterson explains, "It's in defeat that a man reveals himself. In defeat I can't face people. I haven't the strength to say to people, `I did my best, I'm sorry, and whatnot.' " Over his career Talese has written 38 articles on Patterson, which may help explain why the fighter is so forthcoming. "Joe Louis: The King as a Middle-Aged Man," and "Ali in Havana" also portray the fighters after their heyday. These portraits are affectionate, admiring. Though virtually crippled by Parkinson's disease, Ali signs his full name for autographs, though it takes him 30 seconds for each one. "He does not settle for a time saving `Ali' or his mere initials. He has never shortchanged his audience."As for Louis, his reputation for naivety and, w

Wish I could copy and paste this book on my walls

Published by Thriftbooks.com User , 17 years ago
That is how much I loved this book. Mr. Talese eliminates all fluff and nonsense generally written about celebrity and New York City, decisively zooming in on the truth of both, giftedly selecting details that stir, exciting our interest, and thereby awarding his readers an intimate and delightful read.
Copyright © 2020 Thriftbooks.com Terms of Use | Privacy Policy | Do Not Sell My Personal Information | Accessibility Statement
ThriftBooks® and the ThriftBooks® logo are registered trademarks of Thrift Books Global, LLC