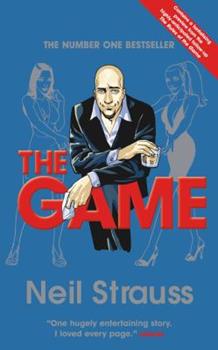 This description may be from another edition of this product. Hidden somewhere, in nearly every major city in the world, is an underground seduction lair. And in these lairs, men trade the most devastatingly effective techniques ever invented to charm women....

Published by Thriftbooks.com User , 14 years ago
Fascinating book about the PUA subculture. Love the black leather like binding and the red bookmark. Highly recommend reading for any man that wants to broaden his horizons. I've read similar books and I'll share some observations to aspiring PUA's : All the good PUA guys either are either somewhat naturally charismatic, or have higher education and / or have established careers with significant incomes. While I'm not suggesting that you have to be rich or handsome to be a successful PUA, you will need to be getting a paycheck somehow. And higher education is a definite plus. Odd how all these books seem to leave out this essential fact. Invest in yourself. Material things come to those that have self actualized. If something has a direct benefit to an individual or a class of people, and a theoretical, abstract, or amorphous benefit to everybody else, realize that the proponent's intentions are to benefit the former, not the latter, no matter what bull they try to feed you. Don't take proffered advice without a critical analysis. 90 % of all advice is intended to benefit the proponent, not the recipient. Actually, the number is probably closer to 97 but I don't want to come off as cynical. As a young man, you're on your own. Society divides and conquers. Unlike women who have advocates looking out for them (NOW, Women's Study Departments, government, non-profit organizations, political advocacy groups) almost no one is looking out for you. Know that few people have your best interests at heart. Your mother does. Your father probably does (if he stuck around). Your siblings are on your side. Everybody else worries about themselves. Remember, 97% of all advice is worthless. Take what you can use, and trash the rest.

Published by Thriftbooks.com User , 14 years ago
Strippers. Liquid lounge womanizers. It has you hooked in seconds. With each page turned, the alluring to creepy Casanova villains and victims come alive. Drinks are shaken not stirred. Jacuzzis overflowing with blondes. Miniskirts and thongs slice the heated air, hanging from the ceiling fan. The Game is a fast-paced, mesmerizing tale of a underground secret society. A study in social psychology, transformations from nerd to stud, emotional self-destruction, evolving into the creation of the seduction industry. Investigative journalist Neil Strauss of Rolling Stone/NY Times fame provides an exhilarating memoir as he submerses himself in the shadowy lair of pickup artists. Bizarre. Alluring. It`s a cult-like subculture of hipsters who've cracked the persuasion code. Lives dedicated to seducing as many women as possible. Unpredictable story lines. A flurry of celebs. Replete with a stunningly bizarre cast of narcissistic and yet colorful characters. But this is not a tale of the skills he obtains, or the women he seduces. It's a journey of self discovery. It's the tale of the men he befriends, lives with and works with in his quest of becoming a master pickup artist. It's about male bonding and relationships. It's about the emotional trauma the men experience by devoting their lives to the pick up artist endeavor. Neil's assignment is ironic. He was born a nerdish, unconfident geek. Despite having two bestsellers under his belt, he was a self-described chick repellant. Short, bald, skinny, with a big schnoz. Painfully shy, Neil is as miles away from a world-class womanizer. He schooled for 3 years at a womens college (Vassar) and never had a girlfriend. He dives in headfirst, burns the midnight oil reading three boxes of persuasion books. He studies aura, handwriting analysis, palm reading, magic tricks, and posts online all day in the seduction message boards. Taken under the wings of the self-proclaimed greatest pickup artists, he researches techniques, obsessively testing gaming theories in clubs seven days a week. His professional wingman is a charismatic diminutive figure, one Erick Von Markovick, aka Mystery. Mystery is king of the PUAs, with a worldwide following of disciples and students. An outlandish dresser and swashbuckling self-promoter, Mystery single-handedly invents an entire language of acronyms and jargon and field techniques for speed seduction. He adapts group dynamics, reverse psychology and neurolinguistic programming into conversation to subconsciously seduce, in a sleight of hand fashion. Under his tutoring, PUAs perfect a slavish dependency on routines and patterns until they become successful social marketing robots. In a scant two years, Neil transforms from journalist loner into "Style", a legendary seducer. The seduction community evolves from merely an anonymous online forum into an overnight lucrative business. Soon Mystery and Strauss are world known as the pre-eminent social scientists of attra

Published by Thriftbooks.com User , 15 years ago
The majority of the negative reviews seem to come from people who feel it's their duty to turn up their noses at the sleeze 'n' cheese of the Pick-Up Artist Community. After all, a Society that exists for the sole purpose of seducing poor, defenseless club-hopping women isn't deserving of our respect. Maybe. But we're not reviewing a society. we're reviewing a book. And as such it's one of the most entertaining books I've ever read. Using a crisp, succinct and witty writing style, author Neil Strauss chronicles his inflitration of a secret society of Pick-Up Artists (PUAs) who prowl the Southern California coast. These men use all means of tools...from neuro-linguistic programming to gimmicks and routines...to play upon the insecurities of women as a means of getting them into bed. Along the way, he examines the psychology of women as a means of illustrating just why some of these tricks work. It should be noted that this is NOT a "How-To" book. But as a guy, it definitely gave me a deeper understanding about how women think (as well as some insight into the age-old question "What does SHE see in THAT guy?"). But Strauss also gives you a deeper insight into the male brain, as he exposes many of the PUA Masters as men who simply are in constant need of validation and approval. While on one hand he marvels at the seeming ease in which the PUAs seduce and entice women, he acknowledges that there's something sad about these men. At the heart of this book, however, is Strauss's own story of transformation. In two years, he goes from a nerdy writer who could never get a date to a master of seduction, juggling a differnet woman every night of the week. Strauss deftly balances his own disbelief at his conquests with just the right mix of boastful wit and cynical foreboding. "The Game" is a humorous and well written account of a fascinating world populated by some interestng individuals. And while these people may not neccesarily be to your liking, the author does a fine job in showing that...regardless of gender...all we as human beings want is to belong. You may hate the players...but don't hate "The Game".

Published by Thriftbooks.com User , 16 years ago
I'm 52, married, don't know the author, have never heard of this secret society and still found this book fascinating. I say this because so many reviewers seem to have an agenda. From the arrival of this book b4 a business trip where my wife asked if I was going through another mid-life crisis, to the enjoyable but staccato writing style of Strauss, I read this book in pure fascination but half the time wondering if it was fiction. From reading these reviews it is clear there is basis for this book. But a Project Hollywood with male drama and Courtney Love thrown in for humor? Well, evidently it was true. This book should be read by all young men. Yes, some have the ability to approach women in some manner, but most DON'T have the ability in ANY manner. This book will help. Does it give contrived starting lines? Sure, but the point of the book is, "men need it" and when most people think of pick-up lines, these are actually exactly the opposite as more fully explained in the book. We are not conditioned to know the appropriate way to approach women! But apparently, we can learn. This book is educational on talking to women but also an interesting story about the crazy, neurotic lives these guys live. As to the author, his writing style is much too young for me but I did enjoy watching him weave this story and predict a bright journalistic career for him. I had previously read his biography of Jenna Jamison and enjoyed it also. I have not seen much publicity about this book. I heard about it from the short story in Esquire. I would love to read the NY Times article referenced in the book. I recommend this book for both men and women in their dating years but also recommend others read this that just want to learn about interpersonal relationships or read a zany life of needy men.
Copyright © 2020 Thriftbooks.com Terms of Use | Privacy Policy | Do Not Sell My Personal Information | Accessibility Statement
ThriftBooks® and the ThriftBooks® logo are registered trademarks of Thrift Books Global, LLC