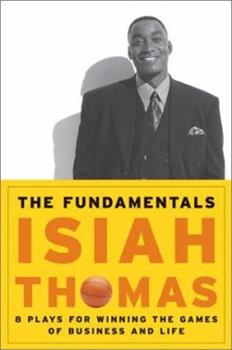 The Fundamentals: 8 Plays for Winning the Games of Business and Life

by Isiah Thomas and Wes Smith

The coach of the Indiana Pacers and NBA legend reveals the eight universal principles that must be mastered in order to achieve success in life and provides personal stories drawn from his experiences as an African American athlete, businessman, and community leader.

Published by Thriftbooks.com User , 18 years ago
This book I think personally relates to me and many others because it is about how to succeed when expectations are lowered by others... and mainly yourself. This book dares the reader to not only dream a bold dream but also how to keep fighting for it... despite mistakes and barriers. What really stands out was that Isiah spoke of the having a "Root" and how important it is to stary true to it and how that would make the difference in success in business or any goal we have in life. As far as Isiah's life goes... what I admire most was that where he came from, his basketball acheivements and the fact that he had a social consicence. His accomplishments dispells the myth that business sucess lacks compasson when it fact it can make one climb higher, reach farther and fight harder in all phases of life.

Published by Thriftbooks.com User , 19 years ago
This book describes what it takes to cross multiple socioeconomic levels in one generation. If you want an easy to read, thorough description of how to exercise the "freedom of the will" to rise above the present and grasp the possible, then buy this book.I am an executive, who has a BSEE and an MBA. I've read many books on: leadership styles, management techniques, innovation, power, etc... Compared to those books, this book does not disclose some new technique that has not been covered by others, perhaps in far greater detail. It does something far better than that. This book describes what it took Isiah Thomas to raise himself up from the lowest socioeconomic level in America.I can identify with Thomas' struggles. When I was 7 I lived in Chicago's West Side (near Humboldt Park). At that time, my parents were poor, but they taught me the same lessons as Dear (Thomas' mom) taught Thomas.The lessons seem simple to somebody at a higher socioeconomic level: set a vision (dream) of where you want to be in N (5, 10, 20, whatever) years; commit yourself to accomplishing the tasks that will take you through the path that leads to your vision; use your will to stay focused on that path, do not let yourself get distracted from that path by "quick and easy fast buck options" that only sidetrack or derail you; and build yourself a network that will help you stay on track to win.However, the above is extremely, painfully difficult if you live day-to-day worrying about your: next meal, walk home from school, and all the other things that plague a poor inner city kid. This book is an outstanding motivational item for any child that is facing "the streets" (i.e. the obstacles Isiah faced. It lets them know that their struggle can be conquered. It provides, through detailed descriptions, the techniques used by one of the conquerers. Those techniques help a child, teenager, or perhaps, even an adult, rise above their current state. I know, because Thomas is not the only one to come out of the tornado. Many others have done the same, using a similar set of techniques.BTW, if you want to read about the CBA, read "Life on the Rim: A Year in the Continental Basketball Association" by David Levine. Thomas' book is not about one mistake in an executive's life.If you want to read a lifting, exercise in the freedom of the will to succeed, buy this book... or give it as a gift to somebody that could really, really use it. I have.

A great book for those who are starting out

Published by Thriftbooks.com User , 20 years ago
I am sick of these silly reviews which harp on the CBA bankruptcy, which Isiah acknowledges as a failure. What they did not acknowledge is that this "50+ year old" league was on the brink of failure when he bought it, and would have failed earlier had he not, plain and simple. This is a great story for someone (like most of our inner city youth/adults, especially those who grew up in the 1970s) who is struggling with their circumstances, yet striving to make something of themselves and those around them.The CBA critics are probably the same who regard Jack Welch, as the ultimate Corporate God, yet fail to acknowledge him as what he has clearly shown himself, a self-aggrandizing, greedy, materialistic, adulter. Isiah, unethical? I have not seen him take the 5th and refuse to discuss his mistakes. What about these guys: Ken Lay, Scott Sullivan, Bernie Ebbers, Andy Fastow? Hmm....Sorry boys, I will stick with Isiah and his book. He never tries to portray himself as a victim, yet acknowledges his mistakes. What would you call this person? I think we would call this person a human being. Make this book a part of your library and share it with your kids.

Everyone has a "Gladys"

Published by Thriftbooks.com User , 21 years ago
This is a book for all ages. Isiah really touches the heart talking about growing up in Chicago in a big family that didn't have a lot. Gladys was the name he gave his local basketball court. It was where he sought solace from the tough world and where he realized his dream. This is a great story that isn't about business but about how you can fulfill your dreams. The fundamentals are practical and encouraging. If you are a sports fan, you will love his insight into the big games of his career. It is an easy read that gives us all hope.

Published by Thriftbooks.com User , 21 years ago
A great book by the greatest little man to ever play the game of basketball. Isiah's blueprint for success is supported by his incredible will to win, whether on the basketball court or in the boardroom. Critics who point to the CBA failure (probably without even reading the book) should realize that Isiah does, in fact, acknowledge his poor decisions, yet still continues on... reminiscent of the time he threw the ball away to Larry Bird, costing the Pistons a chance at their first world title, yet still returning to eventually lead Detroit to back-to-back NBA championships. His will to win has inspired him to aspire to greatness, despite poverty in Chicago, his ridiculous absence from the original Dream Team, and false allegations against his character. Still he rises... and we can all learn from his path, illustrated through his advice and personal anecdotes. Just like when Zeke would refuse the "helping" hand of an opponent who had just knocked him down, he has chosen to ignore the criticism he knew would come with the release of this book. Obviously, he has something important to say... read the book and find out for yourself.
Trustpilot
Copyright © 2022 Thriftbooks.com Terms of Use | Privacy Policy | Do Not Sell My Personal Information | Cookie Preferences | Accessibility Statement
ThriftBooks® and the ThriftBooks® logo are registered trademarks of Thrift Books Global, LLC