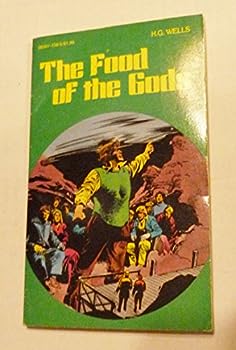 The Food of the Gods (Pocket Classics)

This description may be from another edition of this product. A scientist discovers a new substance which makes animals grow to several times their normal size, but soon the substance enters the food chain and the giant animals run amok Classics Illustrated...

Published by Thriftbooks.com User , 12 years ago
"Bigger isn't necessarily better." Dr Ruth Westheimer This is one of HG's more popular books. This was made into a movie "The Food of the Gods" (1976) and closer to the book "Night of the Lepus" (1972) which was an early form of Rabbit Transit. As with all of HG's work this is more of a social commentary than it is a sci-fi story. A scientist finds a way or a food to keep growth from being inhibited. It gets out of hand in several stories each tied together with the single theme. The first part of the story is simple how you deal with big chickens. However it gets a little more complex when it's "how do you deal" with big people. HG shows how England is a stagnant society in the least changes upset the status quo and need to be squelched. As you can see he is split this up into several books each book being a stand-alone story yet counts on the story before it. As you read this story you must think how I react if I had to deal with giants, how I react if I was the giant. Hopefully we come away from the story with a better understanding of how society works and /or can work. "He was no more than a great black outline against the starry sky a great black outline the threatened with one mighty gesture the firmament of heaven and all its multitude of stars." Was Dr. Ruth and her assumption? The Food of the Gods Night of the Lepus ~ Stuart Whitman

The Human Society is about to change...

Published by Thriftbooks.com User , 15 years ago
Many of H.G. Wells books deal with what we call science fiction. Such as The War of The Worlds, The Time Machine or the Invisible Man he likes to write about wonders brought about by new technology or alien ways. He loved a good What-if-this-happened? Yet there was also a social scientist within him. With such novels as The Island Of Dr. Moreau and The Food Of The Gods he also explored the human condition and how fixed or flexible it could become. In the Food Of The Gods two men, Mr. Bensington and Professor Redwood put their knowledge together to make a chemical that allows an animal or plant continuous growth without need for it to stop to build up energy or material. Soon mankind is dealing with giant wasps, chickens, grass and all kinds of harmless or very dangerous creatures. And soon babies are given the BoomFood to make them into giants. What should mankind do with the giants? Employee them? Bar them from the rest of civilization? Kill them? The novel is full of humor, mostly pointed at the class system, scientists, the common man and society in general. There is even a slight hint that each new generation THINKS of itself as giants, as big minds with big ideas. The funny part was the slow change of the characters' impressions on me, as I started to think of the normal sized humans as pigmies near the end and the giants as the normal sized humans. This was done mostly by allowing them to become the major characters, shifting the point of view, so we started to see more of the giants, their way of life, their problems and less of the normal humans. Also, the normal humans seemed to whine a lot. Clearly this novel has effected many other books and many, many sci-fi B-movies. THEM just to name one. Get it used or new.

Published by Thriftbooks.com User , 16 years ago
When the scientists Bensington and Redwood create a new compound which turns growth in all living things from a series of bursts and intermission into a constant, they have no idea how it will affect the world. Indeed, when this new "Food of the Gods" gets loose, it begins to grow giant plants and animals...and giant people. But, is the world big enough to hold an aging race of pygmies and a young race of giants? This now largely forgotten work was written by H.G. Wells (1866-1946) in 1904, during his brief sojourn with the Fabian Society. Mr. Wells did not write his science fiction to tell entertaining stories; instead, he used his stories as vehicles for social commentary. In this particular book, Wells introduces a new race of mankind, large and capable - born outsiders who can not possibly fit into the social constructs that surround them, much less understand them. Now, unlike War of the Worlds and The Invisible Man, why did this book fade into obscurity? Overall, I would say that Wells critique of Edwardian society is not deep enough to allow this story to transcend that setting. Also, while the story is quite good, it is not great, unlike those other stories. So, am I saying that you should skip this book? Definitely not! H.G. Wells was a tremendous storyteller, and this story is quite entertaining. If you are a fan of Edwardian literature, or just like a good story, then you will definitely like this book. I highly recommend it.

Published by Thriftbooks.com User , 17 years ago
>Of course people have gotten bigger in the 20th century, due primarily to better nutrition, health care, excercise, etc., but we are hardly the 40 foot giants Wells' talks about. <p>Look up "nutrition" in a dictionary: It means "food". In particular people have gotten RADICALLY taller in the last fifteen years of the twentieth-century--a remarkably short span of time--due to what's being put INTO food (chemicals--I'm not talking about vitamins here): not "bigger", TALLER. Taller, thinner, less muscular, more stretched out, in a word, misshapen, disfigured. <p>This book can be taken as a parable or an adventure story, and so on, but to a remarkable extent it happens to be a DEAD-ON prophecy.

The science is real,and the characters come alive