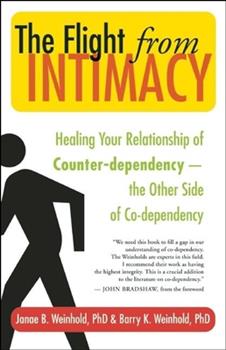 The Flight from Intimacy: Healing Your Relationship of Counter-Dependence a the Other Side of Co-Dependency

by Janae B. Weinhold and Barry K. Weinhold

Do you know someone who... -- Has trouble being close to others? -- Has a strong need to be right - all the time? -- Acts self-centered and egotistical? -- Never asks for help? -- Expects perfection in self and others? -- Seldom appears vulnerable or weak? -- Has difficulty relaxing? If so, this person may suffer from counter-dependency, the little-known flip side of co-dependency. The Flight from Intimacy , by psychologists Janae and Barry Weinhold,...

Published by Thriftbooks.com User , 13 years ago
Well-written book, even though some of the treatments methods the therapists use with the clients are strange to me. However, lots of good suggestions on how to help yourself.

Published by Thriftbooks.com User , 13 years ago
If a person has trouble being close to others, is a perfectionist, acts self-centered and never asks for help, these are signs they may suffer from 'counter-dependency', the opposite of co-dependency. Two psychologists team up to reveal counter-dependency as the barrier to creating strong relationships, examining the foundations of counter-dependency, showing how to spot and cope with such people, and teaching how to gain and heal within committed relationships. The result is an outstanding guide which reveals some little-covered roots of relationship issues, making for a recommended pick for any library strong in self-help psychology. Diane C. Donovan California Bookwatch

The Flight from Intimacy

Published by Thriftbooks.com User , 14 years ago
In Breaking Free of the Co-dependency Trap, the authors looked to the true causes of co-dependency. They stated that 98% of the human population is co-dependent and that this reflected stilted emotional development caused by unmet needs in the first six months of life. Essentially, psychological development is halted at this point so that the individual can find what he or she needs to resolve the situation. Counter-dependency is another major concern to healthy human development. Counter-dependency is the opposite of co-dependency. Whereas co-dependent people look to others (or substances) to solve their issues; individuals who are counter-dependent refuse to depend upon anyone. They attempt to be completely independent and isolate themselves from others. Counter-dependency begins between the ages of six months and three years. At this age, children are beginning to explore their surroundings. If they have the unconditional love and security of their parents, children eagerly learn about their surroundings and begin to become independent people. If during this exploration the child is abused or otherwise traumatized, the child learns that the world is an unsafe place and that he or she can't trust anyone. To the outside world this individual might seem to have it all together but underneath they are miserable and completely alone.
Trustpilot
Copyright © 2022 Thriftbooks.com Terms of Use | Privacy Policy | Do Not Sell My Personal Information | Accessibility Statement
ThriftBooks® and the ThriftBooks® logo are registered trademarks of Thrift Books Global, LLC