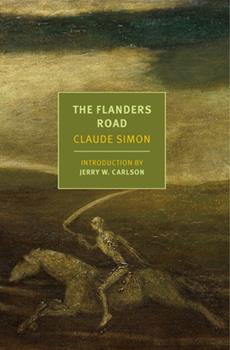 By the winner of the 1985 Nobel Prize in Literature, a riveting, stylistically audacious modernist epic about the French cavalry's bloody face-off against German Panzer tanks during WWII. On a sunny day in May 1940, the French army sent out the cavalry against the invading German army's panzer tanks. Unsurprisingly, the French were routed. Twenty-six-year-old Claude Simon was among the French forces. As they retreated, he saw his captain shot off...

The best book about war I've ever read.

Published by Thriftbooks.com User , 22 years ago
This novel is a bit as if the Virginia Woolf of "Mrs Dalloway" had written a book about wartime France. (Of course this is a ludirous comparison, but it might give you an idea what the book is like). Its sentences have neither beginning nor end, just like the nightmarish ride of disoriented soldiers in the spring of 1940. They keep riding through the cold, the dark and the rain for days and nights on end - only to be attacked and wiped out within a matter of seconds. - Of course war is not all there is about this book, but its depiction was what I could never forget since I first read it.

Published by Thriftbooks.com User , 22 years ago
With the possible exception of The Georgics, this is Simon's greatest work. It is hard to describe the experience of reading this book. It's difficult going, and exhausting to read more than 15-20 pages at a time, but the effect is like going into a deep trance. There are only three or four episodes, repeated over and over in different ways, throughout the book, but the true subject matter, sex and death (really), is presented through these events so as to make the reader feel these situations in a different way. This is the essence of the nouveau roman style for Simon - less formally structured than Robbe-Grillet, and more emotional.

If you are not a sharp reader stay away...

Published by Thriftbooks.com User , 23 years ago
I would never say this is for everyone, but if you have come this far not by mistake (as in you have some idea who Claude Simon is, an interest in french literature or the new novel in particular) I advise you to go the next mile and actually read it. I find Simon to be one of the more accessible artists of the new novel era in France( no matter whether you or the author wish to quibble over whether he belongs to this group). The reworking that Simon gives to the concepts of narrative structure are not so avant-garde as say Robbe-Grillet and I believe the style of The Flanders Road can easily be appreciated even by those who disdain so-called high brow writing. The reason for this could be that in its plots,situations and characters Simon is anything but high brow. The roaming eye style of his narrative is not just a purely theoretical or philosophising device (although it is this subtly) it is also an aesthetic device that is enriching of what might be classified as a thin plot - if you were only drawn to reading by plots. No what Simon does here is take a narrative about a young man in war (the Second world war) serving (albeit only fow a few days or weeks) in a cavalry unit that is drawn into the chaotic retreat of the fiasco that was Frances defense against the blitzkrieg. Simon draws you into the atmosphere of this experience and does not leave you outside the construction of order but requires you to piece together the words into each readers own interpretation. I advise you to linger on this work, appreciate it for what it is not what you expect of a war novel. Let your mind wander with the words which is just what Simon intends. I myself lovingly returned to it day after day taking a page or twenty at a time over a cup of tea in the sunshine or under overcast skies.
Trustpilot
Copyright © 2022 Thriftbooks.com Terms of Use | Privacy Policy | Do Not Sell or Share My Personal Information | Accessibility Statement
ThriftBooks® and the ThriftBooks® logo are registered trademarks of Thrift Books Global, LLC