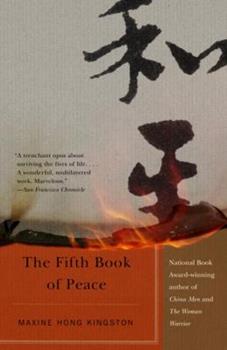 The Fifth Book of Peace

A long time ago in China, there existed three Books of Peace that proved so threatening to the reigning powers that they had them burned. Many years later Maxine Hong Kingston wrote a Fourth Book of Peace, but it too was burned--in the catastrophic Berkeley-Oakland Hills fire of 1991, a fire that coincided with the death of her father. Now in this visionary and redemptive work, Kingston completes her interrupted labor, weaving fiction and memoir into...

Published by Thriftbooks.com User , 16 years ago
Maxine Hong Kingston's The Fifth Book of Peace exhibits a journey through human conscience. Kingston lost the manuscript to her Fourth Book of Peace in a house fire in 1991, and through the process of reviving or regurgitating the contents of the book, she came up with The Fifth Book of Peace. The contents of this book was inspired by Kingston's personal experiences, such as the loss of her father, coincidently, Kingston returned home from her father's funeral only to see her neighborhood in a blaze of fire, as well as Vietnam Veterans' accounts of the war and during a writer's workshop that Kingston hosted. The Fifth Book of Peace derives from Kingston's own view of war from a noncombatant and rather bistander perspective intertwines the issue of war and human suffering that come from thought and memory -- World War II, the bombing of Hiroshima and Nagasaki, and the first Iraq War. Possibly, she is attempting to encourage thinking and awareness. It is the overtones of education that Kingston states are the purpose or reason for being, "Educate America. Teach everybody"(60). Although these are the words taken from her mother as she asks Kingston about her purpose in life, "What have you done to educate America? Have you finished educating the world yet? You go educate America?" (60) The book is divided into three enormous chapters that can be considered three separate books. There is plenty of information within these chapters that change in tone, and may take some quiet reading time to discern which parts are fiction and which parts are autobiographical. The first chapter, Fire, is the introduction to The Fifth Book of Peace, and presents an inkling of where the book will proceed. There is much dialogue between the characters in the book, as well as dialects and ethnic references to describe the characters and people that helped Kingston write the book. The book has quite a number of notable passages, and one particular passage may possibly sum up the book: "Peace begins in thought. Thoughts enworded go from mind to mind, and mind makes the world. Peace, illusive, abstract, negative Yin, dream, would take a long writing-out to make real. Its book has to be longer than war books -- longer than a bumper sticker, longer than a sound bite. As we read, neuropeptides in the brain grow longer, longer than in nonreaders. Though becomes body. Sudden fast change is a method of war. The logic of peace has to be spoken out at length" (54). I recommend this book for the pure purpose of expanding your mind or to add another perspective to the meaning of war.

Published by Thriftbooks.com User , 16 years ago
"If a woman is going to write a Book of Peace, it is given her to know devastation". Thus begins Maxine Hong Kinston's meditative part autobiography, part fiction, part lost spiritual text. This is a deeply poetic book that is framed by an incident of fire that led to many losses of lives and property, including the author's house and most of the material of her work-in-progress novel, "the fourth book of peace". After the fire, she decided to write anew about peace. From a different perspective. Kingston whose "woman warrior" stands as a great source of spiritual strength for many narrates the personal voyages she undertook through the course of this book, and peppers them with her quiet strength and wisdom. Towards the end, she concludes, "I am coming up with a new rule for living: Only do things that make you happy, and you will create a peaceful world."

Published by Thriftbooks.com User , 17 years ago
It's hard to define the genre of this 2003 book, the latest by this well-known Chinese-American author who is best known for her early work "The Woman Warrior: Memoirs of a Girlhood Among Ghosts", the story of her girlhood in San Francisco. Years have passed and she has several other books to her credit. From the photo on the book jacket I see her hair is now gray and know that and she has lived through a changing America. The 70s and the peace movement have influenced her. And basically, this is what her book is about, told through the eyes of her Buddhist faith and her deep believe in peace. The book is 402 pages long and is divided into three sections. Each one is different and yet connected. The first section is pure memoir, written with an artist's touch. It's the story of the fire in her Oakland community in the early 1990s and how her home burned to the ground. Among other things, a manuscript for a novel was destroyed. She has rewritten that novel which is the second, and longest, section of the book. The third sections tell of her experiences in running writing workshops for veterans, and this section could be classified as "self-help". Hence there is confusions of genres which makes it difficult for libraries and booksellers to categorize this book. The entire work might be thought of in the context of literature in response to war and can be viewed as an epic journey, as our heroine must conquer obstacles and develop much self knowledge as she brings her message of peace to the world. She's well versed in the classics and there are constant references the Odyssey and other literary works as well as symbolism from all of the world's religions. In the first and last sections, the writer, herself, is in the center as she searches for community and finds possibilities for peace by creating communities that go far beyond the bonds of family and geography. Sometimes her writing was a little too descriptive for me. For example, a tree might be beautiful but a description of several paragraphs slowed down the action. But I did relate to her sense of loss regarding her manuscript. And I really did like the novel she finally wrote in which a fictional couple, running away from the Vietnam draft, move with their young son to Hawaii and form a community of war protestors, including Vietnam soldiers who are fleeing the war. It was a bit preposterous but it was a good story, well told and I particularly loved the Hawaii she described. The last section inspired me as a writer and I found I even started using one of her techniques called "walking meditation" to let myself discover some of my personal writing needs. I find the theme of war and peace in the context of Vietnam a little outdated. So much has happened since then as our world has changed. And, in a way, she is still locked in the thinking of the 70s. The anti-war message is a good one even though I think she is a bit naïve. However, she certainly is doing her part in

Published by Thriftbooks.com User , 17 years ago
Most of us who live in the Oakland/Berkeley area are familiar with the fact that Maxine Hong Kingston's home, containing her only copy of a nearly finished book, burned to the ground in the Oakland Hills Fire of 1991. She was returning from her father's funeral when she saw the hills in flames and made an attempt to save her manuscript. The lost novel was titled The Fourth Book of Peace, inspired by an ancient Chinese tale of three books that were deliberately burned.Her new book, The Fifth Book of Peace, deals with her efforts to come to terms with her own losses as well as an attempt to understand the suffering of those who are veterans and survivors of war. This luminous book is set in four sections: Fire, a firsthand report of the 1991 inferno; Paper, her search for the original books of peace; Water, a recreation of her lost novel about a couple who flees to Hawaii to avoid the Vietnam War; and Earth, Kingston's moving account of the writing workshops she organized for war veterans.Always a compelling writer, Maxine Hong Kingston has written a wise and spell-binding meditation on the power of Story and the challenge of living and acting on one's beliefs; she guides us toward peace without avoiding the fact that we live in a world at war.

Published by Thriftbooks.com User , 17 years ago
In Maxine Hong Kingston's brilliant new book, THE FIFTH BOOK OF PEACE, she pulls together her entire life, as well as all the major characters of THE WOMAN WARRIOR, CHINA MEN, and TRIPMASTER MONKEY, in order to achieve an extraordinary feat of reconciliation, a vision as honestly won as the dancing circle at the end of Fellini's "8 1/2." It is a book that overflows with wisdom, marvelous humor, and lyrical beauty, all in the service of exploring a most serious question: can we live together in peace? The author looks into the abyss created by humanity's impulse toward destruction: of other human beings, the earth, beauty, and even self. She knows that it is her duty to harmonize those conflicting impulses into a peaceful, viable community. She is driven by a yearning for comedy rather than tragedy. It is not comedy in the sense of sitcoms, but in the classical sense of Dante's great work, where we find at the center of the universe not destruction but a mystic rose. Or, in the case of THE FIFTH BOOK OF PEACE, we find a lotus. This is the best book I have read in a long, long time. Do not miss it.
Copyright © 2020 Thriftbooks.com Terms of Use | Privacy Policy | Do Not Sell My Personal Information | Accessibility Statement
ThriftBooks® and the ThriftBooks® logo are registered trademarks of Thrift Books Global, LLC