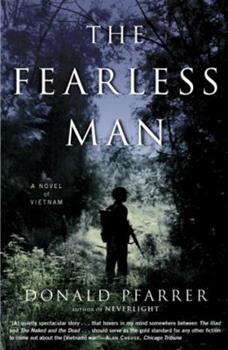 The Fearless Man: A Novel of Vietnam

On its publication in 1982, James Carroll called Donald Pfarrer's Neverlight "the most intelligent and moving novel that I have read about Vietnam." Paul Fussell wrote that it was "one of the finest novels about war I've ever read, and that includes A Farewell to Arms ." Now Pfarrer revisits the conflict and creates a modern classican epic novel of all the wars we wage to occupy ground, forge a future, and save our own souls. The mission is Vietnam...

Pharrer Brings Both War and Life Into Sharp Focus

Published by Thriftbooks.com User , 16 years ago
"A Fearless Man" succeeds brilliantly in communicating the complexities and stresses of both combat and the spiritual component of life. In a clear, dialogue-driven manner, Donald Pharrer's depiction of men in battle and wives in waiting examines the ambiguities and certainties that define their existence. This is a book that you will remember long after the final pages have been turned, because the protagonists' struggles inform the decisions that every person faces when life turns tough. Read it and be prepared to ponder!

The War That Haunts Us

Published by Thriftbooks.com User , 18 years ago
Vietnam is the war that never goes away---and Donald Pfarrer's brilliant, brutal, ultimately uplifting novel tells us why. With incredible realism, Pfarrer depicts the experience of Marine combat troops in action, matching themselves against a shrewd, courageous, and dedicated enemy fighting on its own ground. You have never read a clearer, more vivid, more truthful depiction of combat and its consequences for the human soul. Read this book and you will understand why those of the Vietnam generation lucky enough to survive came back from the war irrevocably changed. Those men, some fearless, some cowardly, most a conflicted amalgam, are still among us. Get to know them. Get to know what they passed through. Read this book.

An extraordinary, classic portrait of men at war

Published by Thriftbooks.com User , 18 years ago
This book joins the classic and very best portraits of men in battle. Its accounts of the fighting on the ground in VietNam will ring true to any who have entered that hellish zone we call combat and emerged alive, relatively intact, with the hope that they can rejoin and still make a life in the world at home and with the women they left behind. This is not just a book for men and it is not simply a war story. It is for all of us. It is about an unending phenomenon in the human experience - war - and how civilized people struggle to do what they must and, at the same time, keep alive the feelings and values that, within, they treasure. Readers who have not experienced combat will find Pfarrer a clear eyed and sympathetic but never bathetic guide to and within this other world that each generation seems destined to create, this parallel world that has clear boundaries and into which we often send our best.

The best novel to come out of the Vietnam war.

Published by Thriftbooks.com User , 18 years ago
Donald Pfarrer has brought into being a vivid, living work of art, a classic story of men at war. The Fearless Man joins a handful of Vietnam books that have transcended the genre; it is a coolly amazing epic, a well drawn, reflective work of literature. The story follows two men, Mac Clare, a law student who drops out to volunteer for service in Vietnam, and Paul Adrano, a Jersey boy who joins the priesthood against his father's wishes. Adrano, a navy chaplain, arrives in Vietnam and volunteers for duty with the Marines-hoping that combat will confirm his faith and the existence of God. He meets Mac Clare, a company commander who leads from the front. Mac Clare is a Marine's Marine, an officer whose seemingly unshakable courage conceals a deeply thoughtful and conflicted soul. These two unlikely companions are thrust into the crucible of war, combat made real, almost visceral by Pfarrer's taught, rhythmic prose. Pfarrer portrays the swirl of jungle fighting with scrupulous detail and piercing emotion. Multiple narrative threads contain Adrano's struggle with faith and temptation, Mac's agony at the loss of his men, and the quiet, valiant ordeal of Mac's beautiful wife, Sarah, who waits with other officer's wives back in Quantico, all of them knowing their worlds hang by a thread... a thin cord waiting to be cut by a single telegram. With its comrades, Dispatches, by Michael Herr, The Things they Carried, Tim O'Brien and Tobias Wolff's In Pharaoh's Army , The Fearless Man strikes to the heart and remakes our judgments of the Vietnam war and the soldiers who fought it. Let me expand Donald Pfarrer's peer group: The Fearless Man joins The Red Badge of Courage, A Farewell to Arms, and The Naked and the Dead as one of the most impressive and best books of the American language. Powerfully written, masterful in its description and commanding in intellect, The Fearless Man will become a classic.

Published by Thriftbooks.com User , 18 years ago
This book depicted the Vietnam War from several different view points and did a terrific job. It is a great read for anyone interested in this time period in our country and how it affected the people involved, from soldiers, to family members, to politicians, to draft dodgers. I would highly recommend it. The story captures the reader from the first page to the last page.
Trustpilot
Copyright © 2022 Thriftbooks.com Terms of Use | Privacy Policy | Do Not Sell My Personal Information | Cookie Preferences | Accessibility Statement
ThriftBooks® and the ThriftBooks® logo are registered trademarks of Thrift Books Global, LLC