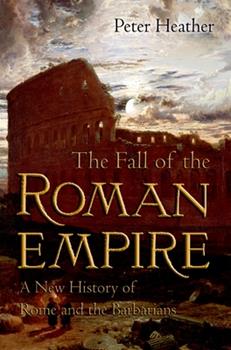 The Fall of the Roman Empire: A New History of Rome and the Barbarians

The death of the Roman Empire is one of the perennial mysteries of world history. Now, in this groundbreaking book, Peter Heather proposes a stunning new solution: Centuries of imperialism turned the neighbors Rome called barbarians into an enemy capable of dismantling an Empire that had dominated their lives for so long. A leading authority on the late Roman Empire and on the barbarians, Heather relates the extraordinary story of how Europe's barbarians,...

The Mysterious Death of the Roman Empire

Published by Thriftbooks.com User , 15 years ago
Notice the title of Peter Heather's fascinating study of the final centuries of the Roman Empire. It is a clear tribute to Gibbons, yet the "Decline" is intentionally missing. Because according to Dr. Heather the Roman Empire never declined; its fall was due to external, rather then internal, forces, and the perpetrators were two: the Huns and the Goths. Heather rejects the theories that see the cause of the fall of the Roman Empire in internal maladies. Contra popular opinion, he argues that the division of the Empire to Western and Eastern parts was rational given the increased size of the Roman population. As the Roman way of life spread, and more and more conquered people became Roman citizens, the patronage that had to be distributed became too enormous for any single Imperial Court - hence, the need for two Courts. Nor is the fault in the Christianization of the Empire; although he acknowledges that the rise of Christianity brought a Cultural Revolution (separation of the Living from the Dead; Equality of all before the Lord; diminished importance for the educated Romans in comparison with the simple true-believers, pp. 121-122), Heather doubts it effected the functioning of the empire much. The Roman Empire was still perceived as divinely blessed "only the nomenclature was different" (p. 123), Christian theology fitted neatly into Roman Chauvinism, and it was only as consequences of defeat that St. Augustine started to develop his anti-Nationalist theology (pp. 230-232). The best evidence against the "internal decline" thesis is that the Roman Empire did not actually collapse - only it's western half did. In the East, the Roman Empire soldiered on, until another powerful foreign threat - Islam. Therefore, Heather suggests, the answer is external: As a consequence of the exposure to the Roman world, the Germanic tribes confronted by the Romans have changed. An agricultural revolution took over the German world, increasing its population and changing its organization: along with surplus, there developed inequality, with powerful leaders and kings solidifying larger and larger groups of so-called "Barbarians" (pp. 87-94). But the grows of the German population was not in itself, enough to shake and eventually to topple the Western Empire; the fuse for that was a new menace, coming from the East - the Huns. Heather remains officially agnostic as to the origin of the horse riding people from the Great Eurasian Steppe, although he seems to support the theory that their origin related to the Hsiung-Nu - a Nomadic threat to the Chinese Empire several centuries before (pp. 147-149). The Huns made their ways into the neighborhood of the Roman Empire in two stages - in the late 4th century, they have arrived at the Caucasus, and in the second quarter of the 5th century to East and Central Europe, culminating in the raids on the Western Empire, by their sole unifier and greatest leader, Attila. But it was not ultimately the Huns who

Published by Thriftbooks.com User , 15 years ago
In this volume Peter Heather attempts to explain that ultimately, the cause of the Fall of the Western Roman Empire was not due to tax inequities, a failure of the economy, internal discord, etc., but rather because of the simply overwhelming level of barbarian invasions which began in the late 4th century. This he proceeds to do very well. This work is divided into three main parts; "Pax Romana" for chapters 1-3, "Crisis" for chapters 4-7 and "Fall of Empires" for chapters 8-10. I will discuss each of these briefly. In "Pax Romana" Heather discusses the Barbarians, the Romans, and the Roman Empire briefly. For each of these groups he gives an overview of their development to the latter part of the 4th century, in order to provide us with a starting point for the period of the barbarian invasions. He discusses what it meant to be "Roman" and how even cities far removed from Rome, such as Trier, were fully involved in Roman life and, rather than being rustic frontier outposts, were as fully a part of the Empire as cities of the Italian peninsula. He discusses the increased autonomy of the Emperor and how the Empire changed and adapted to the rise of Sassanid Persia as a threat to the East, including changes in the taxation system to support an increased military presence in that area. He also discusses the evolution of Germanic tribes and their coalescence from small, isolated people into larger, more unified kingdoms, capable of truly threatening Rome rather than just gaining an occasional, ultimately meaningless victory, as had previously been the case. All of this is to set the stage - to explain the status of the Empire and people within and outside it, and to show that in the late 4th century the Empire had recovered from the tumultous 3rd century and the Persian threat to once again reach a point of balance, able to maintain its prosperity as well as defend its borders. It is impossible to do justice to section 2, "Crisis," with a summary. Here Heather provides what is simply the most detailed account of the military actions of the late Roman Empire that I have ever read. This section is outstanding. Heather provides a great deal of information, beginning with the Gothic campaign which resulted in the huge Roman loss at Hadrianople and ending with Aetius repulsing the Hunnic invasion at the Catalaunian fields. He discusses various battles, their effect on the Empire, and how the Empire responded to meet these threats. From the initial Gothic Invasion to Alaric, from the Hunnish threat to the Vandal invasion of North Africa, he covers these events and their impacts in great detail. In the final section, "End of Empires," Heather first discusses the fall of the Hunnic Empire and why this was not of as much benefit to the Empire as might be suspected as it allowed many other Barbarian invaders access to the Empire, as opposed to facing one single threat. He also discusses the Western Empire's last struggles to remain viable, including its

Thoroughly Researched on a Challenging Subject

Published by Thriftbooks.com User , 15 years ago
This is a thoroughly researched book on a challenging subject. Initially, you may find yourself struggling to get through the book, in the first 100 or so pages, like I did, primarily because these pages are used to set up his thesis. However, when the author starts to get into the main event, his writing picks up and you may find itself, as I did, drawn into the subject. And, what a subject it is, about Stilicho and Aetius and Attila and Alaric - this author writes with authority and detailed research on all of these individuals and their key roles in the fall of the Western Roman Empire. After reading the book, I left with a stronger sense of the importance of the Roman generals, Aetius and Stilicho, and the importance of their murders by the emperors, in the fall ultimately of the empire. I also left with the recognition of the importance of the Huns and Goths in the ultimate fall of the Western Roman Empire. This is a great book, the best book that I have read so far, on this very complex subject.

Excellent up to date analysis of a complex subject

Published by Thriftbooks.com User , 15 years ago
This book is really a gem. Heather really dissects the fall of the Roman empire based on new archeological evidence and a thorough review of the facts that are known. His conclusion is that the empire did not collapse from within as Gibbons surmises, but that it was done in by a number of events cascading from the Huns moving into the Eastern European plain. Heather really explains a lot of the strategic context that the empire was facing at the time. His analysis and logic are first rate.

The Unthinkable: a New way to Understand Very Old Facts

Published by Thriftbooks.com User , 16 years ago
Heather has accomplished kind of an academic miracle: he has given new light to a very old issue that has been explored, analyzed and written about almost to death: the causes of the demise of western roman empire. I know all the big names that have ever written about this: Gibbons, Bury, the many italians and french XIX century scholars, T. Mommsem, Spengler, Toynbee and many many more. Heather is different to all of them. Clear, simple explanations grounded in common sense AND new archeological discoveries make the trick and Heather make it very well. With his approach we see less the monumental and unavoidable development of a macro-dramatic internal "decline and fall" as the simple, direct and at last unbearable action of very obvious facts...once they have been explained by Heather. We simply see an still prosperous empire being gradually overwheelmed by too many enemies that became less barbarian and enough civilized to gather and muster the military forces and pressures that at last, coming from every side, were too much to be resisted anymore by the imperial resources. How this came along centuries of accumulative evolution is the task that brillianty accomplish Mr Heather. At the very least, his book offers a new, refreshing, intriguing view of such a colossal development. So it is a must for any history geek.
Copyright © 2020 Thriftbooks.com Terms of Use | Privacy Policy | Do Not Sell My Personal Information | Accessibility Statement
ThriftBooks® and the ThriftBooks® logo are registered trademarks of Thrift Books Global, LLC