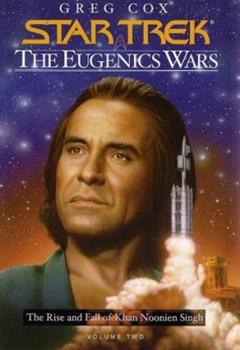 This description may be from another edition of this product. Gary Seven, extraterrestrial agent, together with his human colleague Roberta Lincoln, finds himself the final line of defence in a brutal struggle for the future freedom of Earth. Can they prevent...

Published by Tashi , 9 months ago
I loved this book Was fast paced with plenty of humor and my inner nerd loved the way the author mixed things from all trek series in with pop culture references from our current real world 90s era Also the Augments behaviors in the story were a great suprise and the plot ended up totally different from what i had imagined Would definitely recommend Arrived promptly and in good condition

Published by Thriftbooks.com User , 17 years ago
Khan.Although Star Trek has pitted its various starships and space station crews against such formidable antagonists as the Klingons, the Romulans, the Borg, and the Xindi, few of them have had such an indelible persona as Khan Noonien Singh, a genetically engineered "superman" who, according to the Original Series episode "Space Seed" and the 1982 feature film Star Trek II: The Wrath of Khan, ruled one-quarter of the Earth during a period called the Eugenics Wars. As Khan says to Chekov in Star Trek II, "On Earth, 200 years ago, I was a prince, with power over millions."Whereas Greg Cox's first novel in a two-book cycle sets up the whole Khan backstory (he's the product of an ambitious attempt by brilliant but twisted scientists to "improve" humanity by tinkering with human DNA) by mixing real Earth history from 1974 to 1989 and Star Trek lore, Volume Two tells the story of Khan Noonien Singh at the very height of his power, his failed attempt to unite his genetically engineered brothers and sisters under his banner, and his ultimate exile aboard the DY-100 sleeper ship he will name, aptly, SS Botany Bay.Although there is a thematically-linked "frame story" set during Capt. Kirk's first five-year mission about the Enterprise investigating a colony of genetically engineered humans that has applied for membership in the Federation, Cox's main storyline focuses on Agent Gary Seven and Roberta Lincoln's attempts to stop Khan -- who had briefly worked them in their mission to save Earth from a third world war but then fell out with Seven and followed a darker path -- from blowing up the planet and destroying humanity. To tell this important story in the Star Trek mythos without having the 21st Century reader rolling his or her eyes and going, "Yeah, right. If the Eugenics Wars happened in the '90s, why didn't I hear about it on CNN?" Cox has incorporated the Balkan Wars, the rise of militias in the United States, the "Black Hawk Down" ambush in Mogadishu, and almost every major crisis in the mid-1990s and meshes it with Star Trek "history," which thankfully was not very detailed in the 1967 episode that introduced Khan. As he does so well in Volume One, Cox blends an exciting Star Trek adventure -- full of references to established "facts" and characters from various movies and series episodes -- with real historical events that took place from 1992 to 1996. He slyly makes social commentary about our recent past and allusions to other famous movies and television series, including an homage to Ricardo Montalban's (Khan) most famous TV role.The pace is fast and Cox's style is very engaging. He apparently loves Star Trek and its characters, and it clearly shows in this exciting and entertaining series of novels. I strongly recommend this two-book series to Star Trek fans and even non-fans.

Now we get to the meat of the story...

Published by Thriftbooks.com User , 18 years ago
Volume One was the set up, the cheese and crackers, but in volume two we finally get to the beef and potatoes, the main course. We watch as Khan goes up against Gary Seven, Roberta Lincoln and the rest of the planet INCLUDING his own super-brothers and super-sisters who refuse to follow him. What will Khan do when he realizes that he won't be allowed to rule the Earth? And how can anybody stop him?Khan is shown as a ruthless, reckless, yet thoughtful leader, who cares for his own people and, at first, most of the world. But he, like most of us, slowly comes to the understanding that Earth's problems are not easy to solve and its people are not easy to handle.Better than the first volume!

Published by Thriftbooks.com User , 19 years ago
We get to see the continue evolution of Khan from wide-eyed kid to evil super freak. In this story Khan is building a shadow kingdom and is bent on world conquest. His biggest obstacle is Gray Seven and and his other super being sibilings.You see how Khan wants the world to be a better place but naturally in his own image. He will do whatever is necessary but in the end things go wrong.We see some cameos of various people from the Trek world. People that appeared from TOS to Voyager. During this story we also have a side story where Kirk is trying to figure out if the Federation should accept a new world that is involved in making humans superior.Overall a great story and I enjoy how Cox gets current events that happen in the 1990's and make it part of the story. I can't wait for his 3rd story in this Khan adventure.

As good -- or BETTER than Volume 1...exceptionally fun.

Published by Thriftbooks.com User , 19 years ago
I was really blown away by The Eugenics Wars volume 1...big time. I just wasn't expecting a Trek novel to be SO different, so creative, so GOOD. This was an exceptional example of creative juices on overload. Kirk and Spock take a backseat to a few characters from the past, that normally wouldn't command even a 2nd glance -- but Greg Cox's fertile imagination has brought new life to the Trek Universe in ways that brought many smiles to my face as I read through book's 1 & 2.Volume 2 picks up shortly after vol 1 left off, plus a few years.Gary Seven failed to stop the Chrysalis Project from creating a few genetically engineered children before he was able to derail the Project from progressing further...but some damage had already been done. Gary & Roberta scattered the children all over the globe in hopes of keeping them from some supreme scheme to take over the world. Gary even attempts a valiant effort to recruit Khan to assist him and Roberta in helping us wayward earthlings from killing ourselves prematurely. A noble idea, but with Khan's impossibly overblown ego, a gesture which was destined to fail...miserably. Before we know it, Khan has himself an island near the equator and has regrouped the children of Chrysalis and has devised a plan to force the world under his iron rule, which he is convinced is the best way to save mankind. What I found most interesting aside from the clever way Mr. Cox managed to take existing history and mix it up with Trek Lore, was how he managed to give Khan's character depth. We have to remember that he isn't responsible for his own existence, we can thank the Chrysalis Project for that. I never would have thought that his character could be as deep as he was written in these two novels. We all know that eventually Khan and his minions end up aboard the SS Botany Bay, which The Enterprise will encounter a few hundred years in the future, and again in Star Trek II, The Wrath Of Khan (still one of the best movies). This book fills in the gaps of his life on earth and how the Eugenics Wars started, how they end, and how events we have come to know about have a connection to Star Trek that at times evokes outright laughter, not because they are silly, but mostly because of how clever they have been woven into the plot.Greg Cox has written an amazingly creative story that shows his obvious love of the series. Aside from Judith & Garfield Reeves-Stevens' who write on a level that just about nobody can reach, Cox has gone in another direction which has made this series fresh in a way I never would have thought possible. You have many choices in the world of Trek, and some would say most are not worth the price of a paperback, but The Rise And Fall of Khan Noonien Singh Volume's 1 & 2 are most definitely worth the price, even in hardback. Pick this one up and savor the incredible journey that Mr. Cox has pieced together for us. It is a journey well worth taking, and worth taking more than once.

Published by Thriftbooks.com User , 19 years ago
Lightening can indeed strike twice in the same place, as "The Eugenics Wars: The Rise and Fall of Khan Noonien Singh, Volume Two" proves to be every bit as exciting, entertaining and humorous as the first Volume of this saga. The second portion of this engrossing story takes the reader from the beginnings of Khan's consolidation of his power, through the events that lead to his flight from Earth on the DY-100 class sleeper ship SS Botany Bay. From beginning to end, this novel is eminently satisfying.
Copyright © 2020 Thriftbooks.com Terms of Use | Privacy Policy | Do Not Sell My Personal Information | Accessibility Statement
ThriftBooks® and the ThriftBooks® logo are registered trademarks of Thrift Books Global, LLC