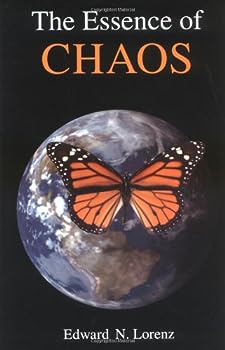 The Essence of Chaos (Jessie and John Danz Lectures)

Chaos surrounds us. Seemingly random events -- the flapping of a flag, a storm-driven wave striking the shore, a pinball's path -- often appear to have no order, no rational pattern. Explicating the... This description may be from another edition of this product.

Great review of chaos by one of the founding fathers

Published by Thriftbooks.com User , 12 years ago
Edward Lorenz is credited with "discovering" chaos theory based on his meteorological work. In The Essence of Chaos, Lorenz does a great job describing the historical background of chaos theory and its implications for the natural world. Well-written with some interesting graphics.

Published by Thriftbooks.com User , 13 years ago
I read this book when it was snowing outside in the Sierras. I was immediately able to correlate this book with the chaotic snow fall. Extremely good read.

Published by Thriftbooks.com User , 21 years ago
My first intro to chaos was Gleick's book *Chaos: Making a New Science* which focused on the history of the discovery of chaos. Although this was fascinating - and a good read for those just learning about dynamical systems, strange attractors, and the like - Lorenz's *Essence of Chaos* was much more satisfying. Lorenz analyzes specific chaotic functions, gives you the math (equations are in the appendix) and generally accomplishes what the title suggests - that is, exploring the essence of chaos. I highly recommend it for anyone interested in this deeply fascinating subject.

Great Stuff from the Great One

Published by Thriftbooks.com User , 21 years ago
Lorenz has done it again. This is a terrific inside look at chaos by the man who made Gleick's book possible. And it had a few interesting new ideas too--who would have thought there was a different way to present fourth-order Runge-Kutta? Who would have thought Runge-Kutta could convert a phase-space circle to a nice-looking fractal attractor? A good book for the air plane.

The Essence of Chaos: A great primer on chaos theory.

Published by Thriftbooks.com User , 23 years ago
Edward Lorenz takes a complicated topic and makes it accessible for all people, regardless of prior knowledge of chaos theory. He provides interesting and easy to follow examples of chaos, fractals and complexity. The illustrations are helpful and he includes a glossary of terms to aid the beginning chaos enthusiasts to quickly become familiar with the terminology. Mr. Lorenz gives a brief history of chaos and explains how it is used in the study of mathematics, meteorology, economics, music, and other fields. The book is very interesting and is highly recommended for those who would like to acquaint themselves with the exciting world of chaos.
Trustpilot
Copyright © 2022 Thriftbooks.com Terms of Use | Privacy Policy | Do Not Sell My Personal Information | Accessibility Statement
ThriftBooks® and the ThriftBooks® logo are registered trademarks of Thrift Books Global, LLC