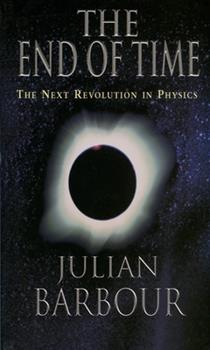 The End of Time: The Next Revolution in Physics

Richard Feynman once quipped that "Time is what happens when nothing else does." But Julian Barbour disagrees: if nothing happened, if nothing changed, then time would stop. For time is nothing but change. It is change that we perceive occurring all around us, not time. Put simply, time does not exist. In this highly provocative volume, Barbour presents the basic evidence for a timeless universe, and shows why we still experience the world as intensely...

Time and Why We Are Here

Published by CarolABinkley , 4 months ago
Would love to read this book, and in fact am purchasing it. And I will write another review when I find the TIME, AFTER reading it. Anyway, what I want the New Physicists to keep in MIND, besides the TIME, is the worldview of the earliest Greek philosophers, the Old Physicists, in about the 7th century BC, as they begin to grapple with CAUSE, without knowing that IS the concept they are attempting to unravel, as they move from an animistic worldview, steeped in events that are seemingly unrelated, but determined, by something they had yet to explicate but felt was eternal, to a studied and abstracted perhaps, view of CHANGE, of beginning and end, of cause and effect that was time-dependent, and related to movement and motion. I'm presently reading about Thales, Anaximander, and Anaximenes, and it could be a long haul, as I am cross-referencing with Frazer's Golden Bough and Burton's Primitive Cultures. And the burning question, still, is Why The Greeks? I have some theories, dealing with an ordered, confident view of nature and reality, and then maybe a traumatic event or series of traumatic events that stimulated their need to know. "How will we know", they asked, thinking if they could only know, then perhaps the suffering experienced over centuries could be ameliorated. At least these Greeks understood evil, and understanding evil, then could observe the good. But without an accompanying evolution in genetic structure, I doubt Greek philosophy could have taken root. In fact, maybe it was this mutation in DNA that was the enabler. And perhaps this was the mutation that made possible the evolution of a more exceptonal, even extraordinary, sense of foresight. At any rate, just remember the early Greeks, and don't find yourselves regressing to a less intellectual view of nature and reality.

Not sure what to make of this one.... interesting though

Published by Thriftbooks.com User , 12 years ago
Usually change is a difficult thing to deal with. This book is about new ideas from a very peculiar point of view. I can't say I did follow each and every detail as I would like to. I got lost quite a few times and I felt like the whole thing is a joke and then got back to trying to tag along with the ideas presented. If you want to challenge your mind with a different approach about time then you may want to consider reading this book. Again, change of mind set is definitely a challenge.

I Am Not Here

Published by Thriftbooks.com User , 18 years ago
In our limited fashion we all approach this from the realm of existence. Platonia is only an architectural representation of a nonexistence. I would like mr. barbour to take his theory to the next level. Hello, Mr. Barbour? Are you out there? That is a rhetorical question...of course you're not.

Complex concept but I had no problem following conceptually

Published by Thriftbooks.com User , 18 years ago
Does time really exist? What if time were actually an illusion? If time did not really exist them quantum physics and classical physics could be united into a unified theory. On the other hand, if time does not exist then what are we to make of theories such as a space-time continuum? In this text Julian Barbour clearly analyses the concept of time and puts forth the current evidence for its non-existence. The arguments are compelling, the logic strong, and the results convincing - or at least it is convincing enough to consider it as a real possibility. Julian Barbour is a theoretical physicist who takes this complex and counter-intuitive concept and puts it forth in layman's terms. This is a highly recommended book for anyone interested in theoretical physics and how it is changing our view of our world. "The End of Time" is sure to become an authoritative reference for any discussion on the existence of time.

Published by Thriftbooks.com User , 19 years ago
Of course people may have trouble with this book! It grapples with one of the most counter-intuitive hypotheses ever pondered. Unsurprisingly, befuddled readers will readily point fingers at the author's "poor exposition". When someone fails to understand Joyce or Faulkner, it's the reader's fault, but when someone can't understand a science author, then it's the writer's fault....The fact is that if the author (or anyone else, for that matter) understood the nature of time well enough to spoon-feed us with a crystal-clear, airtight argument (together with its attendant implications, as some readers demand) such insight would already be in the news as the single greatest breakthrough in the history of physics. As it is, the ideas presented in the book are speculative and unstructured. They may even be flawed. So what? To date, they constitute one of the few (if not the only) non-technical discussions of current thoughts on the most baffling aspect of physical reality.This book is clearly meant for those who want to "read about it first", whenever some interesting idea first appears in print, no matter how undigested. As for those readers who would rather wait for the Discovery-Channel version of everything, their stance is legitimate, but can hardly be blamed on a book.

Published by Thriftbooks.com User , 22 years ago
A new, revolutionary theory that can keep you awake for quite a few nights after you read it! Either a freshman in Literature or a Professor in Physics, set your mind free and give yourself in it - the fact that I will use the point of view and logic of this book in the Ph.D. dissertation in economics I am currently writing says it all...
Copyright © 2022 Thriftbooks.com Terms of Use | Privacy Policy | Do Not Sell My Personal Information | Accessibility Statement
ThriftBooks® and the ThriftBooks® logo are registered trademarks of Thrift Books Global, LLC