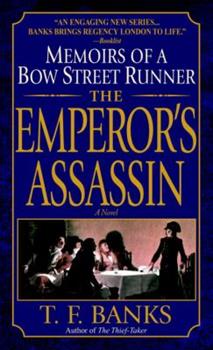 The Emperor's Assassin: Memoirs of a Bow Street Runner

(Book #2 in the Memoirs of a Bow Street Runner Series)

For twenty years, England and France have been at war. Now the war has come home... On a sunny July day in 1815, Plymouth Sound is crowded with boats vying for a view of England's great battleship HMS Bellerophon. For aboard the vessel is the stout little Frenchman who threw the world into chaos. In London, some people clamor for Napoleon's execution, others for his exile, and still others for a civil trial on English soil. For one humble London detective,...

Published by Thriftbooks.com User , 13 years ago
The second novel in the series, The Emperor's Assassin keeps the action up. The plotting and characterizations are tight, but there were a couple of plot devices that could have been smoothed out.

And exciting mystery set in a tumultuous period...

Published by Thriftbooks.com User , 14 years ago
All of England is astir as the great enemy, Napoleon, after twenty years of warfare, is kept off-shore, imprisoned in the HMS Bellerophon after he had escaped once before and had to be defeated at Waterloo. Sight-seers in small boats cluster around, hoping to catch a glimpse. Bow Street Runner Henry Morton is drawn into the intricate politics of the French when the mistress of a French loyalist is found dead with signs of torture. The war is ended and the Loyalists have the upper hand in France--so why all the intrigue? There is no hope of a plot to free Napoleon, is there? He is guarded far too carefully. There can be no chance of an attempt at an assassination, can there? Whatever the international issues, Morton knows that murder has occurred and it's his duty to find the killer. The background of post-war politics and intrigue and the disposition of Napoleon is fascinating. This small pocket of time is brought to life vividly in various scenes and situations. The mystery is a good one, starting simply, but spiraling into multiple murders and treachery and multiple factions set at cross-purposes, driven by all too human motivations. There are the usual questioning of witnesses and searching out suspects, but also quite a lot of action with foot-chases and pistols and fisticuffs and racing carriages across country and smugglers in hidden coves and clambering over cliff-sides. I thoroughly enjoyed the many aspects of this tale. I hope this series continues, since it promises to be a very good one.

Want more of the series

Published by Thriftbooks.com User , 16 years ago
I have enjoyed both these books and have been waiting for more. My patience is running out. Are you two still out there writing or not. Please Mr. Russell and Mr. Dennis won't you give us more?

Morton's 'Memoirs' is another thriller!

Published by Thriftbooks.com User , 17 years ago
Henry Morton is back! And in "The Emperor's Assassin," the sequel to "The Thief Taker," our erstwhile detective establishes himself as an officer--and a favorite character--to be reckoned with. It's 1815 and the Napoleonic wars are over, for all intents and purposes. The Little Admiral/General/Emperor is in custody aboard a royal naval vessel at rest in Plymouth Harbor, awaiting the solution of an international legal conundrum: what to do with him. Two viable sides, heavily vested in the outcome, are competing, at all costs, to prevail: the Bonapartists and the Royalists. And "at all costs" means murder. A young (beautiful) woman is found dead in London and the Bow Street Runners (early detectives in England) take over. This is Morton's world, of course. It's determined that she has been tortured, most brutally, and the chase is afoot. One thing leads to another as Morton and his crew begin to try to sort out the red herrings from the Dover souls, as it were. T.E. Banks (in reality Canadians Sean Russell and Ian Dennis) appears to capture the landscape and atmosphere of Regency England, as well as to create exciting characters set in a most exciting time. Morton ably directs the chase in a book that seems to increase its pace as the pages turn. Some of Banks' characters continue from the first book, most noteably Mrs. Arabella Hildebrant of Drury Lane (famous actress and Morton's love interest) and Jimmy Presley, his chief aide. Will Napoleon be assassinated? Will Morton find the culprits and solve the mystery? History answers the first question and Morton skillfully answers the second in a clever and intriguing period piece. Readers can hope for a third adventure. Soon. (Billyjhobbs@tyler.net)

an immensely riveting and enjoyable read

Published by Thriftbooks.com User , 19 years ago
Set in the summer of 1815, this second Henry Morton murder mystery focuses on the deadly goings-on amongst the French refugees in England whilst their own personal demon (on hero, depending on which faction you were talking to), Napoleon Bonaparte, was being held (by the British) on HMS Bellerophon just off the Plymouth Sound.The novel opens with the discovery of the body of a young woman that had (seemingly) been washed up on shore. The initial view is that she committed suicide. But when Skelton, the surgeon, examines the body, he discovers that the woman had been bound and tortured before her death. The death of this unknown woman is beginning to smell like murder to Henry Morton, one of Bow Street's most reputable Runners. And in trying to discover the identity of this unfortunate unknown, Morton discovers that she was French (Madame Angelique Desmarches) and that she was the mistress of a very important French aristocrat. Was Angelique murdered by Bonapartist agents eager to know what the Royalist were about to do with their fallen emperor? As the investigation begins to take some rather unexpected twists and the body count begins to mount, Morton cannot help but become perturbed about this pat theory and to wonder what, exactly, is going on... "The Emperor's Assassin" proved to be quite a read. Fast paced and with quite a few clever plot-twists, I spent a very happy afternoon being totally absorbed and engrossed with this book. Having enjoyed the previous Henry Morton murder mystery novel immensely, I was happy to discover that this second installment in the series lived up to my expectations. True, you almost being to expect and suspect what will happen next, but the authours did such a good job in telling their story and in letting things unfold smoothly, that you don't actually feel shortchanged just because you can guess what will happen next. (And some of the scenes were so vividly depicted that you could almost swear you'd been watching things unfold in front of the TV, instead of having imagined what it would have been like from a book). I thoroughly enjoyed "The Emperor's Assassin" -- but I do wish that the publishers would make up their minds if a book is going to come out in hardcover or mass market first: my mystery collection is beginning to look a little strange!
Trustpilot
Copyright © 2022 Thriftbooks.com Terms of Use | Privacy Policy | Do Not Sell My Personal Information | Cookie Preferences | Accessibility Statement
ThriftBooks® and the ThriftBooks® logo are registered trademarks of Thrift Books Global, LLC