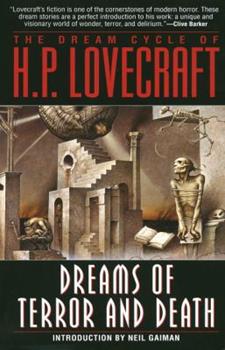 The Dream Cycle of H. P. Lovecraft: Dreams of Terror and Death

" Lovecraft's] dream fantasy works are as terrifying and haunting as his tales of horror and the macabre. A master craftsman, Lovecraft brings compelling visions of nightmarish fear, invisible worlds and the demons of the unconscious. If one author truly represents the very best in American literary horror, it is H. P. Lovecraft."--John Carpenter, Director of At the Mouth of Madness , Halloween , and Christine With an introduction by Neil Gaiman This...

A Thrilling Introduction to Lovecraftian fantasy

Published by Thriftbooks.com User , 17 years ago
I must admit I was really amazed when I read this book. My interest in Lovecraft began three years ago when an online player introduced me to the Call of Cthulhu roleplaying game. Ever since I bought the book and played using his concepts, I was hooked. You don't have to be a roleplaying game fan to like Lovecraft, though a lot of what his stories talk about is easier to read if you have the benefit of some knowledge of Lovecraft's ideas. Basically, the premise of his stories is that man is fortunate to be born ignorant, because if he knew the truth it would either destroy him or lead him into corruption and madness. As far as dark fantasy goes, good stories based on the Cthulhu Mythos (August Derleth's term for Lovecraft-inspired stories) rank among the best. By far my favourite stories are "The Dream-Quest of Unknown Kadath" a surreal short novel of epic fantasy (a short epic? I never thought it possible!), "The Silver Key" a short story but intriguing nonetheless, and "Through the Gates of the Silver Key", which in my opinion is almost as good as the Dream-Quest. While it elaborates on the events after the Silver Key, it really isn't necessary to read one story to appreciate the other. Both stories are good enough to be read on their own. What's been noted on Lovecraft's style is that he seldom produces dialogue and character development. While some of this is practiced in Through the Gates, it is largely true that Lovecraft's style is mostly poetic and not intended to be read like "normal" stories. I would also point out that Mythos tales after Lovecraft do not necessarily follow the strictly "poetic" style the author chose for his works. I'm told Ramsey Campbell does the Mythos particularly well, and he is an example of the more traditional horror novelist. All in all, The Dream Cycle of H.P. Lovecraft is a selection of some of Lovecraft's greatest flights of imaginative fantasy. Very dark and chilling fantasy, but it has the "feel" of fantasy nonetheless.

Published by Thriftbooks.com User , 18 years ago
Undoubtably one of my favorite authors' most mind blowing stories are compiled here. If you haven't experienced Lovecraft's genious you're really missing out. The imagination this man possessed was incomparable. He created alternate universes and forces, creatures and powers, an entire mythological cycle by the power of pure imagination. These stories will transport you to other worlds. The words will suck you in and leave you feeling like you've experienced an apocalypse rather than simply read a story. Unfortunately some folks seem to think that it wasn't pure imagination that created such memorable texts. This fairly common myth was perpetuated by the "Simon" edition of the "Necronomicon" which borrows from Lovecraft and combines this with ancient sumerian mysticism. For some reason "Simon" made up an elaborate story about how Lovecraft had occult ties. Not true. He may have been inspired by ancient lore and beliefs and used that to spark his imagination, however the truth is that the Necronomicon, Cthulhu, the Mad Arab etc... are PURE FICTION. The product of an incredible imagination. Anyone who has really read Lovecraft will find nothing in common with his Al Azif and the hoax "Necronomicon" that you can find in any occult bookstore. Anyone who knows Sumerian mythology and mysticism will find little in common with this book as well. Lovecraft possessed an imagination like no other. Just read "The Dream Quest of Unknown Kadath" if you don't believe me. It's one of the most stimulating and mind bending works of surreal fantasy I've ever read. I dare you to find something that even comes close to being similar. Check it out.

and you thought you had bad dreams

Published by Thriftbooks.com User , 20 years ago
This is a definite must-have for the serious Lovecraft collector, including the unparalleled 'The Dreamquest of Unknown Kadath'. This novella, and many of the stories included in this volume, stray from straight horror, touching upon it almost tangentially. Most of the stories have an air of a fairy-tale, almost -- dreamlike.

Contents of this book

Published by Thriftbooks.com User , 21 years ago
Azathoh, The Descendant, The Thing in the Moonlight, Polaris, Beyond the Wall of Sleep, The Doom That Came to Sarnath, The Statement of Randolph Carter, The Cats of Ulthar, Celephais, From Beyond, Nyarlathotep, The Nameless City, The Other Gods, Ex Oblivione, The Quest of I ranon, The Hound, Hypnos, What the Moon Brings, Pickman's Model, The Dream Quest of Unknown Kadath, The Silver Key, The Strange High House in the Mist, The Case of Charles Dexter Ward, The Dreams in the Witch-House, Through the Gates of the Silver Key.

Published by Thriftbooks.com User , 22 years ago
This is the second Lovecraft collection I've read, the first being the Best Of collection Del Rey put out before this one, and this one is even better. Who knew that it was possible? Despite the bits of racism and other ugly ideas(which you forget about in the midst of his towering talent), he still put together the most amazing dark fiction ever produced. How could he lay down an even more fascinatingly thick atmosphere than the stuff in that first collection? Who knows, but it's beautiful. In addition, the stories all weave together, producing one of the most realized worlds in all of sci-fi, fantasy, and horror put together. I want to go past the Gate of Deeper Dreams! Just read this collection and sit in awe.
Copyright © 2020 Thriftbooks.com Terms of Use | Privacy Policy | Do Not Sell My Personal Information | Accessibility Statement
ThriftBooks® and the ThriftBooks® logo are registered trademarks of Thrift Books Global, LLC