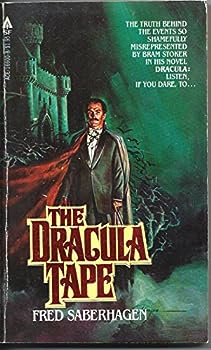 This description may be from another edition of this product. The immortal Count Dracula--Bram Stoker portrayed him as a terrifying creature of the night, preying upon the pure and innocent. The truth is far different. For Dracula is no villain, but a noble,...

The Count Tells All

Published by Thriftbooks.com User , 16 years ago
Bram Stoker wrote Dracula as a series of mostly diary entries and correspondence between characters. One of the few characters who apparently didn't keep a diary was the Count himself. Therefore, the reader never gets Dracula's point of view. In The Dracula Tape, Fred Saberhagen rectifies this omission. The premise is great: Dracula is alive (unalive?) and well in the 1970s (when the book was first published), and has decided that it's time to tell the world What Really Happened. So he discovers the whereabouts of one of the descendants of Jonathan and Mina Harker, makes sure he has a tape player handy, and begins to tell him, and us, his story. The tale he spins makes a few things clear. For example: What was really wrapped in the bundle Jonathan saw Dracula bring his three brides? What really happened to the captain and crew of the Czarina Catherine? Why did Dracula change Lucy into a vampire? Why did Dracula kill Renfield? And finally, Why has Dracula chosen this time to tell his story? (The answer to that question is revealed at the end of the book; I'll not divulge it here!) Dracula's voice is full of humor and wit, but also of sarcasm and occasional contempt, especially for Van Helsing, "the imbecile." Since The Dracula Tape is essentially a retelling of Stoker's novel, I would recommend reading Stoker first, if you haven't already done so. I bought my copy of The Dracula Tape years ago when I saw it on a stand at the supermarket. The blurb said something like "The truth behind the events so shamefully misrepresented by Bram Stoker", and I knew I just had to have it. It's been one of my favorite books ever since!

Published by Thriftbooks.com User , 16 years ago
I really enjoyed this book. Dracula wants to set the record straight. That horrible book is just not true. To accomplish this, he conjures up a huge snow storm to trap a descendent of one of the original characters and then leaves the real story on a tape recorder. At first I thought that this was very tongue and cheek, with Dracula trying to convince us that he was just misunderstood. He really wasn't that bad. He didn't bring a baby for the women in his castle to feed on; it was a pig. He didn't kill all those people on the ship; it was the crazy 1st mate. He didn't kill Lucy on purpose; he was just saving her from crazy Van Helsing. And on and on. But by the end of the book, which I will not divulge, I believed that Dracula really wasn't such a bad guy. The fun part for me was in the process of convincing me. My star ratings: One star - couldn't finish the book Two stars - read the book, but did a lot of skipping or scanning. Wouldn't add the book to my permanent collection or search out other books by the author Three stars - enjoyable read. Wouldn't add the book to my permanent collection. Would judge other books by the author individually. Four stars - Liked the book. Would keep the book or would look for others by the same author. Five stars - One of my all time favorites. Will get a copy in hardback to keep and will actively search out others by the same author.

Published by Thriftbooks.com User , 18 years ago
Anyone who has ever read the original "Dracula" NEEDS to read this fantastic retelling.Fred Saberhagen does a fine job of transforming the Count from the uncomplicated, run-of-the-mill villain he was in Bram Stoker's story into a likable anti-hero with a full-blown personality of his own. (His subtle, incredibly dry sense of humor had me giggling out loud numerous times.)Overall, this is a well thought-out, well-written, thoroughly entertaining book, with a nice touch of romance and a GREAT ending. Very highly recommended!

Published by Thriftbooks.com User , 21 years ago
Have you ever wondered about how Van Helsing could have (safely) given Lucy Westenra four blood transfusions in four days from four different people, without bothering to check for blood types or RH factors? Have you ever wondered how the count could be killed by two knives, one slashing his throat, the other stabbing his heart, when all vampire lore in and out of the novel suggests that normal weapons are useless against him? Have you ever wondered, if you yourself are not religious, why religious artifacts would have powerful effects against him? Then you MUST read this book. Not only is this a fabulous retelling of the story from Dracula's viewpoint, but this version explains and clarifies these and many other weak points in the original tale and is, frankly, a much more enjoyable read for a modern reader.

Start the series with this book

Published by Thriftbooks.com User , 21 years ago
I believe Saberhagen wrote two of his other Dracula novels before this one, but The Dracula Tape sets the stage for an introduction the Count as he "really" is. My wife and I have read the entire series, and this is now the definitive Dracula in our house. Bram Stoker, with his admiration for "the imbecile Van Helsing," tells a skewed version of the story.
Copyright © 2020 Thriftbooks.com Terms of Use | Privacy Policy | Do Not Sell My Personal Information | Accessibility Statement
ThriftBooks® and the ThriftBooks® logo are registered trademarks of Thrift Books Global, LLC