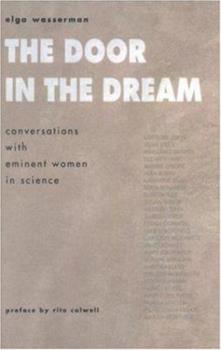 The Door in the Dream: Conversations with Eminent Women in Science

A collection of personal stories of the few women scientists who have achieved the honour of election to the prestigious National Academy of Sciences. Including several Nobel laureates, the career profiles and personal interviews have much to say to those struggling to overcome obstacles. From their passionate love of research to their struggle to balance the demands of home and career, the women share a great deal. At the same time, the portraits...

Good, but was expecting more...

Published by Thriftbooks.com User , 21 years ago
I definitely like the idea behind this book which I thought was to help understand the lives/struggles that the women elected into the National Academy went through. I also liked the way the book was grouped into women born within specific time periods since they seemed to have more in common with each other. But along with all survey books, this one lacked a focus or goal. The author who conducted the interviews seemed very passive and not willing to explore problems the scientists were going through. Wasserman hints at problems/solutions, but I was looking for more.

Published by Thriftbooks.com User , 22 years ago
This book succeeds on so many different levels. Above all, it is a fascinating introduction to the lives of thirty seven remarkably successful women. It is a "good read" for anyone interested in a personal glimpse into many different worlds of scientific discovery. It offers varied templates to young scientists seeking alternative approaches to scientific careers today. It suggests some unconventional wisdom about possibilities for career progress for women and men in any organization. And finally, it provides compelling evidence for employer policies and programs to support employee efforts to balance professional productivity with personal and family commitments.Wasserman offers a unique perspective on all careers based on the life experiences of women scientists elected to the prestigious National Academy of Sciences. She draws on personal interviews, correspondence and biographic materials of thirty seven women(of a total of eighty six elected women scientists) to portray their experiences, often in their own words. Wasserman undertook this project based on personal questions about her own career, which led from research scientist (PhD chemist)to academic administration to the practice of law. She describes her career path in the context of family interests and commitments as well. For this study she sought to understand what differentiated the lives and paths of these remarkably successful scientists from the paths of others with similar interests and potential. In presenting a consistent set of questions to each of her subjects, she looked for similar patterns and notable differences within this group of women and between this group and others. Her interview material is organized into age clusters and is thus informed by societal characteristics of each cohort's era.Wasserman's work yields lessons about career success far byond the world of scientific research she depicts. For these women initial career decisions were most often based on interest, talent and encouragement from family plus special teachers at critical juncture points. Yet these initial decisions were then modified and shaped by circumstance and opportunity, for better or for worse. As with each of us, each of these women faced numerous barriers and hurdles as she moved along a path. As with each of us, the path was often unclear. Yet each of these women found her way to make unique contributions to scientific knowledge. Despite barriers and hurdles each was remarkably successful in her scientific career.Among the barriers and hurdles faced by many of these women, one persists, and that is the dificulty in balancing between professional and personal commitments. Here the lives of these scientists shared challenges similar to the ones faced by men and women at all phases of their professional development. How to balance a strong commitment to work with a strong commitment to family and/or personal life remains a daily
Trustpilot
Copyright © 2022 Thriftbooks.com Terms of Use | Privacy Policy | Do Not Sell or Share My Personal Information | Accessibility Statement
ThriftBooks® and the ThriftBooks® logo are registered trademarks of Thrift Books Global, LLC