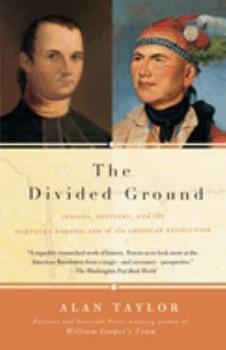 The Divided Ground: Indians, Settlers, and the Northern Borderland of the American Revolution

From the Pulitzer Prize-winning author of William Cooper's Town comes a dramatic and illuminating portrait of white and Native American relations in the aftermath of the American Revolution. The Divided Ground tells the story of two friends, a Mohawk Indian and the son of a colonial clergyman, whose relationship helped redefine North America. As one served American expansion by promoting Indian dispossession and religious conversion, and the other...

An Excellent Study of the Iroquois

Published by Thriftbooks.com User , 11 years ago
I bought this book because I have been doing research on the Iroquois for a book of my own. At first I took it out from the library, but I realized that Alan Taylor's work was teeming with scholarship, which prevented my taking notes on it while I was reading. So I bought my own copy to mark up as I pleased. The more I read, the more I feel confident that most of the books and articles I will need to use are listed in the bibliography and notes, and that the facts and opinions being given in the body of the book are authoritative. For my purposes, I am well pleased with my purchase.

Published by Thriftbooks.com User , 12 years ago
This is a very detailed book that talks about that critical time in US history in the NY boarder lands - 1775-1800. I had hopes that maybe, just maybe it would give some unknown source or indication of sources for the settlement of the Genesee Country in the 1788-1792 period that I and a group of family researchers keeping hoping will give us that much needed "next clue" on a specific family of settlers in that area. Just The book provides very detailed discussions of the role of missionaries and utilizes the lives of Joseph Brant and his fellow school mate Samuel Kirkland as the reference points for providing extremely detailed information on the issue of where the boarder was, how land speculators had huge involvements in the development of that part of NY at the direct detriment to efforts by Brant and others to establish a separate boarder land Indian nation. It also provides a lot of information about the role of the various land companies, politicians, and merchants that provided the political and fiscal backing for the individual speculators. What is also very interesting is the very subtle diplomatic craftsmanship displayed by various tribal leaders of the Six Nations. Reading the book, one also gets a better understanding of the significant, and many times tragic, life of Joseph Brant in this arena. In the end, it was the Six Nations that was divided out of geo-political necessity between with the Old Empire and the New Republic. In that division, the Six Nations found that their "in-between" position really worked to their detriment with the State of New York many times showing its ability to play "hard ball" politics in spirt of federal Constitutional requirements and promises of support by the newly emerging federal sovereign of the United States. The book is really a good historical read on this specific topic. I was reading it on hopes of finding a few clues to help track down specific records associated with the Spring 1789 period, Indian Ebenezer Allen's Mill Tract in what is now Rochester, and the death of one of those involved in building the mill. So, while I didn't find that elusive "best source," I did find the discussions and details truly fascinating and it helped me get some better understanding of the swirling politics involved in this period on both sides of what is today the border. The description of the Hungary Year, and its various causes, also helps explain a lot of things I had come across in my genealogical research as well. Taylor seems to make it pretty clear that Butler's involvement in land transactions in Western NY had little to do with National politics of the Empire wanting to secure that area for the Crown, and more to do with speculators of the UEL/Officers in Niagara. Though I wonder whether Butler may have hoped that by pushing settlers back along the area of the "old forts" he could force the Empire to argue for keeping those lands in the Empire - including the lakes, and future shippi

A kaleidoscope of characters and conflicts

Published by Thriftbooks.com User , 15 years ago
I was intrigued when I saw historian Alan Taylor on BookTV talking about his newest book, "The Divided Ground." Massive in scope, filled with fascinating characters and decades of conflict, Taylor's book is a compelling account of the years surrounding the American Revolution. It makes a good companion volume to Nathaniel Philbrick's "Mayflower," which I had just finished. Taylor follows the lives of two contemporary figures, an Indian named Joseph Brant and a white evangelical minister called Samuel Kirkland, who were schoolmates in early life. He paints with a broad brush, and dozens of other people appear in these pages, accompanied by his succinct descriptions of who they were and what they did. The reader will gain a much deeper understanding of the inevitable conflicts over land, and over boundaries once the Revolution had established a new country which bordered a British territory to the north and west. Also figuring prominently into the mix are the diametrically opposed attitudes of the native American tribes and the frontier farmer settlers toward the uses of land, the concept of private property, and even work/gender roles. This book will take you into that distant time and open your eyes to its rich complexity. Highly recommended.

Published by Thriftbooks.com User , 15 years ago
THE DIVIDED GROUND: INDIANS, SETTLERS AND THE NORTHERN BORDERLAND OF THE AMERICAN REVOLUTION tells of an uncommon friendship between a Mohawk Indian boy and the son of a colonial clergyman. For fifty years they were first good friends, then bitter foes; their stormy relationship would change and mirror the face of changing relationships between Native American and white man, and makes the perfect foundation for an analysis of events in THE DIVIDED GROUND. From border issues and movements to settler rights, THE DIVIDED GROUND offers a key to understanding the influences behind Native/white man interactions and conflicts. Diane C. Donovan, Editor California Bookwatch

Published by Thriftbooks.com User , 15 years ago
I'm a genuine Alan Taylor fan. I was blown away by his William Coopers Town, I think his American Colonies is a great synthetic text, and even though I didn't care for Liberty Men and Great Proprieters I was eagerly awaiting his new book. Divided Ground didn't disappoint. While not the masterpiece that William Coopers Town is Taylor returns to much the same ground, the New York frontier of the late 18th and early 19th centuries. Where William Coopers Town dealt with the settlement of one particular town, in this book Taylor discusses the fight between American, British, and Indians, for control of western New York. It's an impressive book that challenges some of our assumptions about how easily and neatly state power and state policy were formed. Taylor shows that there was an awful lot of contingency in the Early Republic. He shows how Indian policy was not only contested between the US and Great Britain but between the US and the government of New York. For my own particular interests this was the most impressive and important part of the book as Taylor catalogues the wheelings and dealings of early New York government as they attempt to secure the west for the settlement and exploitation of white New Yorkers. For people interested more in Indian history the book contains a lot about the politicla and diplomatic challenges faced by Indians in New York and the Old Northwest in the 18th and 19th centuries. If you're at all interested in Colonial history, New York history, the history of the Early Republic, or Indian history I recommend picking up this book.
Copyright © 2020 Thriftbooks.com Terms of Use | Privacy Policy | Do Not Sell My Personal Information | Accessibility Statement
ThriftBooks® and the ThriftBooks® logo are registered trademarks of Thrift Books Global, LLC