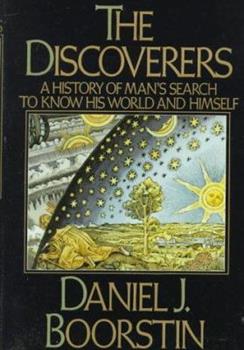 (Book #1 in the Knowledge Trilogy Series)

An original history of man's greatest adventure: his search to discover the world around him.

One of the Best Books I Have Ever Read

Published by Thriftbooks.com User , 18 years ago
I was moved to write this as I learned of Daniel Boorstin's death. While he is gone, his book, "The Discoverers" will be with us for many years as a classic. I have been in both multi-national and venture environments for thirty years, bringing pioneering advanced medical technologies to the global marketplace. When I stumbled onto "The Discoverers" in 1987, I could not put it down. This is a must book for anyone involved in the process of discovery. Boorstin clearly shows that discovery is the adventure of discovering a fundamental truth... While the earth has always been round and bacteria have been here longer than mankind, our understanding of fundamental 'truths' like these took years to discover. Money, prestige, power, suppressed independent thinking, and laziness all combined to create a 'group think,' a status quo, that was difficult to change. Boorstin shows how 'group think' worked against the acceptance of new ideas, and the eventual discovery of truth. Those who are involved in discovery will recognize that these same obstacles stand in our way today. I have purchased 50+ copies since I bought my first copy. I have given them as gifts to others who have dedicated their lives as entreprenuers, scientists, and/or venture capitalists in an effort to creating a better world. This is a book that tells their story and why they must not give up.

Published by Thriftbooks.com User , 19 years ago
A truly wonderful book. One that should be used as a textbook in History in high school. Easily readable, it takes the reader on a voyage of far reaching proportions. What is it that makes this book so pleasurable and instructive? A fresh approach to the evolution of knowledge and science as experienced historically by the pioneers. The exploration in retrospective of the discovery of the concept of time and the clock, the compass, the telescope, the microscope and the evolutionary description of the knowledge that mankind acquired through these instruments and the bold steps of the pioneers that wondered around the seas, the cosmos, the mind, etc.. Why is it that modern culture, the different cultures and science are the way they are ? You will find a lot of answers about how this came to happen in the book by the former Librarian of Congress and senior historian of the Smithsonian Institution. After I read this book, the promise made in the Washington Post Book World's review to it, I found fulfilled: "few indeed will be the readers who do not themselves become discoverers....." This book is one of the most outstanding discoveries that I made in my quest for knowledge. You must not overlook it.

Popular History in the best sense of the term

Published by Thriftbooks.com User , 20 years ago
Daniel Boorstin's Discoverers is a delight to read. Its sweeping theme is humanity's discovery of the natural and social world we inhabit. There are major sections that deal with the discovery of the calendar and the invention of the clock; the geographical discoveries of the 15th to 18th centuries; the natural world of astronomy, physics, chemistry and biology; and the social world of historiography and economics. An approach of this sort can't help but be anecdotal which might offend the sensibilities of many professional historians. Yet, for educated laymen (and those historians who recognize the importance of well written synthesis and popularization) the anecdotes are valuable illustrations of his theme-- and great fun to read. I learned much from this book: details of the lives and work of such luminaries and Isaac Newton, Christopher Columbus and Adam Smith; also of the lives of lesser known discoverers such as Aldus Manutius, Amerigo Vespucci and the Chinese explorer Cheng Ho. His bibliographic essay at the end is an excellent resource for further reading. I look forward to reading The Creators and The Seekers, the next two books in the trilogy.

This was one of my college textbooks.

Published by Thriftbooks.com User , 22 years ago
I was very lucky to have Daniel Boorstin's "The Discoverers" assigned as a textbook for an undergraduate class I took back in the spring of 1988 on European Expansion and Colonization from 1450-1750. Ordinarily, history textbooks are a bit dry. I enjoyed reading them enough to end up only one class short of a double major in History, but this one stood out head and shoulders above the rest.For a change, the text completely held my attention. Instead of only reading the assigned portions, I read the entire book. Upon discussing this with my classmates, I learned that each of them had done the same. Perhaps my memory is tainted because this was an overall fun class where we studied actual sailable scale models of caravels built using the actual techniques of the time. But, I recently finished re-reading the book and it was just as much fun the eighth or ninth time around. I've read it so many times that I've lost count.The two sections that I've always found riveting are the discovery of longitude and Captain Cook muddling around Antarctica. This book is just wonderful. I only wish that the sequel, "The Creators", was just as good. I found that one to be a bit rambling.

Published by Thriftbooks.com User , 22 years ago
My favorite book. I read it once every two or three years, just for the enjoyment. It's easily the most interesting book I've read, with seemingly a revelation to some forgotten question on every page (particularly early on in the book. I know it sounds crazy, but the first 350 - 400 pages really fly!) Simply, it's about how man observed the world around him and his struggle to get a handle on it, use it, catologue it. (intermingled with about 20 biographies). Calenders, clocks, maps, the great voyages of discovery (both West and East, like Colombus and Polo), telescopes, microscopes, fossil records, evolution.....etc. If one has any interest at all in either history or science, this book is a pleasure to read.
Trustpilot
Copyright © 2022 Thriftbooks.com Terms of Use | Privacy Policy | Do Not Sell or Share My Personal Information | Accessibility Statement
ThriftBooks® and the ThriftBooks® logo are registered trademarks of Thrift Books Global, LLC