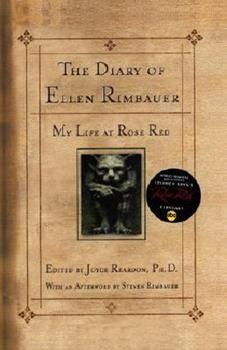 The Diary of Ellen Rimbauer: My Life at Rose Red

This description may be from another edition of this product. At the turn of the twentieth century, Ellen Rimbauer became the young bride of Seattle industrialist John Rimbauer, and began keeping a remarkable diary. This diary became the secret place where Ellen...

I literally finished this book in 2 days

Published by Tara , 5 months ago
I absolutely recommended this book

The haunting history of Rose Red... and Ellen Rimbauer...

Published by Horror crazy , 1 year ago
This was such an enjoyable book! And it’s so surprising that anyone thinks this book is a true story, even though the story is told through the diary of a woman who married a wealthy entrepreneur in the early 1900s. If you’re a fan of the Stephen King horror movie, Rose Red, a made-for-TV miniseries, this book is a fictional prequel, based on characters who are introduced in the movie through flashbacks. A good deal of their story is told early in the movie, but this book reveals their entire history, detailing for most of its short length, the story of their marriage and how it slowly began to crumble even before their honeymoon was over. It also describes how an angry and increasingly disillusioned Ellen Rimbauer became more and more obsessed with the house they moved into, a mansion that her husband had arranged to have built over the course of their long honeymoon. Partly as compensation for a marriage she began to realize was a sham, partly as revenge against John, her husband, she becomes increasingly obsessed with building onto the house, even as she slowly becomes aware that there is something inside the house, something supernatural... and evil. This book, which was actually written by Ridley Pearson, was part of a very unique promotional campaign for the movie, Rose Red. This campaign was built around the idea of convincing people, at first, that Rose Red was an actual haunted house, including featuring all kinds of information about this “real” haunted house on the internet, along with excerpts from Ellen Rimbauer’s “diary.” When Pearson was asked to write the book, he used the pseudonym of Professor Joyce Reardon, another fictional character from the movie. He also decided to credit her as an editor to make the book seem more authentically like a real person’s diary that had been published. In case you’re wondering, there’s a good reason why the film was promoted in such a bizarre fashion. Stephen King may be a popular writer, but he wrote the original miniseries, Rose Red, only a few years after writing another original miniseries, Storm of the Century. Today, many fans of his miniseries consider this a great one, with little to no flaws in the way it was made or written. When it was first aired on television, way back in 1999, most people hated the the rather downbeat ending. As a result, Stephen King was, for a while, not too popular. So, as a simple explanation, the filmmakers simply thought of a clever way to promote the movie and market it without revealing that it was simply a movie written by Stephen King until the movie started being advertised on television, specifically on ABC, the same channel that had previously aired Storm of the Century. A few years after the miniseries became a hit, ABC advertised a film adaptation of this book, not as a miniseries, but as a simple one-night event this time. I recommend this book to all fans of the Stephen King miniseries, which happens to be a great movie if you’re into really terrifying haunted house movies! And if you like the book, you’ll like the movie adaptation of this book! This chilling, powerful combination of spooky supernatural horror and heart wrenching drama gets a strong two thumbs up from me!👍🏻👍🏻

Read over half so far. Just love this book!

Published by Caspey , 1 year ago
Very good book. Anyone who loves rose red will love this book.

Published by carolyn serrano , 2 years ago
Even better then the movie!

You WILL NOT regret reading this book!

Published by Thriftbooks.com User , 11 years ago
Of every book I have ever picked up, this one left me with more emotional struggle than any!!! I will truly remember this book for the rest of my life! Once you read it and do your research you will be blown away by the truth!

The Diary of Ellen Rimbauer

Published by Thriftbooks.com User , 12 years ago
This book explains everything about Ellen Rimbauer anyone who is into this kind of books ought to read it.

The Diary of Ellen Rimbauer

Published by Thriftbooks.com User , 13 years ago
The only thing wrong with this book was that it was edited by the Professor. I know she thought she was doing us all a favor. BUT IT WAS NO FAVOR! When you purchase a diary and resell it to the public, then you do NOT edit it to your own idea of what is in "good taste". Taste is a personal thing all in itself. Diary entries are very personal things, ideas and thoughts that are locked away. I can understand taking out repetitive items, such as entries on how to make chicken soup sixteen times..., but she did not need to be the arbiter of personal taste for everyone else on what was appropriate for us to read! Putting those entries that she thought where not appropriate on line was not making them available to everyone because not everyone HAS access to the Internet without going to a Library, and if the entries are the sort the editor says they are, you would not wish to read them in a public terminal, where others could read over your shoulder! That is my only complaint. I have not even bothered to find out if the edited entries are still available on the Internet or not. It just irritated me that a Diary was edited! Just my personal view.

Published by Thriftbooks.com User , 16 years ago
book was a bit hard to get into, but once you start to read it, it's even harder to put down.

Duped? Fiction? Not fiction? Who cares?

Published by Thriftbooks.com User , 19 years ago
I am glad that I read this book before I read the reviews. For awhile I thought it was a true story, but then it seemed to be a cross between "The Exorcist", the Sara Winchester house, and "The Haunting". The story itself is chilling, not just the house, but the demise of the marriage between John and Ellen. What is a good story anyway? Do we have to be told in advance that it is true or untrue? I take it for what it was, an enjoyable read, enough that I didn't want to put it down until I finished. I don't think this was written by Stephen King because there was a tender side to it that a female could better understand and describe. Whoever wrote it did a great job and a visit to the website is every bit as interesting as the story.
Copyright © 2020 Thriftbooks.com Terms of Use | Privacy Policy | Do Not Sell My Personal Information | Accessibility Statement
ThriftBooks® and the ThriftBooks® logo are registered trademarks of Thrift Books Global, LLC