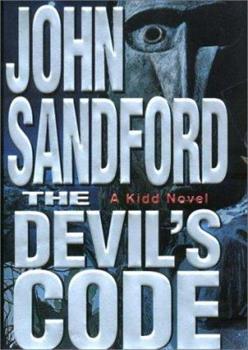 (Book #3 in the Kidd and LuEllen Series)

This description may be from another edition of this product. When Kidd -- artist, computer whiz, and professional criminal--learns of a colleague's murder, he doesn't buy the official story: that a jittery security guard caught the hacker raiding the files of a...

Published by Thriftbooks.com User , 15 years ago
It started when I was housitting at my buddy's condo and the power went out during the superbowl. WTF? I had nothing to do and all I could find was one flashlight. On his coffee table I saw a copy of Devil's Code and once I picked it up I could not put it down. This book is far from what you think it is, but everything that you hope it will be! I would compare it most to watching a really good Russel Crowe or Brude Willis movie, but with powerful and exciting thoughts and situations instead of explosions! Forget all those other "code" book out there. Now this book REALLY changed the way I think about what goes on in government. Something tells me that they're not telling us everying that is going on. You'll never look at life the same again. Now I'm usually a slow reader, but the amount of action that takes place in this book is increadible. To think about the fact that a guy could jump out of an air plane and his parachute could not work and he could still live is increadible.

Published by Thriftbooks.com User , 20 years ago
First off, you can't compare Kidd and Davenport(Prey series), they are different. Davenport is a cop, Kidd is a crook who cares.In this novel Kidd and his sometime lover LuEllen get caight up in a tangled web that involves government officials and greedy corporate officials. St. John Corbiel is intent on making his millions and then skipping the scene. Nothing is going to get in his way. His answer to everything is get rid of the problem. He decides that his computer programmer Jack Morrison knows too much and has him exterminated. This is what brings Kidd into the picture. This is an exciting suspense thriller by a master of the genre. Kidd and LuEllen make a great team. You are sure to enjoy this one.

Published by Thriftbooks.com User , 21 years ago
Thank you John Sanford for giving us another Kidd-LuEllen installment. For those of you who missed the first 2 books of this series it is well worth hunting them down and reading them first. This series is very different from Lucas Davenport, but just as good.

Different but as good as davenport

Published by Thriftbooks.com User , 21 years ago
At his home in Dallas, John James Morrison knows he is in trouble by the nocturnal visit of the security agents. They escort John to AmMath where St. John Corbiel plays a tape in which they caught John violating company policy. John tries to bluff but Corbiel kills him. The security agents arrange a cover-up to make it seem like a night guard shot John while discovering him in a forbidden area late at night. John's sister Lane Ward believes the official interpretation of her sibling's death rings false. She asks John's former partner Kidd to investigate her brother's death. Kidd, an expert on stealing data traveling along the information highway, agrees. He learns that John uncovered something major that led to his deliberate murder. Kidd and his partner LuEllen begin to uncover a monster conspiracy involving AmMath and the Feds using technology to hide murder and blackmail. That knowledge could make Kidd the next dead person. It has been about a decade since John Sandford wrote a Kidd novel (see THE FOOL'S RUN and THE EMPRESS FILE) having switched to the popular Prey novels. Perhaps the earlier Kidd tales were ahead of the times, but with the Internet, Intranet, and Extranet explosion, THE DEVIL'S CODE plays like a modern day electronic thriller. The tale is well executed due to Kidd's intellect, witticism, and ethical beliefs. Although it may seem hard to accept an electronic thief has scruples, Kidd does and that propels his compulsion to investigate. Best selling author John Sandford has returned with one of his great characters in a story that will please more than just net conspiracy buffs because of its fast-paced, gigabit loaded hard driving plot. Harriet Klausner

Published by Thriftbooks.com User , 21 years ago
Conspiracy galore here in this new novel by John Sandford. I'm not too familiar with the author's "Prey" novels, but I certainly enjoyed this one. The main character, Kidd (no first name) and his cohort, LuEllen, investigate the murder of one of Kidd's computer colleagues. The story moves extremely quickly - the crackling conversation between Kidd and LuEllen is a breeze to read and very enjoyable. Now, I have to go find the two previous Kidd-LuEllen novels! Highly recommended.
Copyright © 2020 Thriftbooks.com Terms of Use | Privacy Policy | Do Not Sell My Personal Information | Accessibility Statement
ThriftBooks® and the ThriftBooks® logo are registered trademarks of Thrift Books Global, LLC