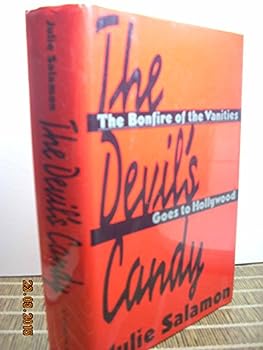 When Brian De Palma agreed to allow Julie Salamon unlimited access to the film production of Tom Wolfe's best-selling book The Bonfire of the Vanities, both director and journalist must have felt like... This description may be from another edition of this product.

Published by Thriftbooks.com User , 16 years ago
First rate account of the making of Brian De Palma's Bonfire of the Vanities. Salamon, at the time a reporter for the Wall Street Journal, received what appears to have been total access to director De Palma, the actors, costume designers, cameramen, and practically everyone else involved in the making of the movie. The level of detail may be too much for someone looking for a quick account of what went wrong in the making of this film, but I found it all fascinating. The only other book I know of that provides a comparably detailed inside look at the making of a movie is Lillian Ross's Picture, which was an account of the making of John Huston's Red Badge of Courage in 1951. A fair amount has changed in movie making since this book was written. For instance, Salamon devotes considerable time to following the second unit director as he attempts to set up some difficult shots, one involving the landing of a Concorde jet at sunset. These days, I imagine most movie goers would assume such a shot was actually cgi. I read the Da Capo Press 2002 reprint. (Interesingly, the subtitle of the book changed from "The Bonfire of the Vanities Goes to Hollywood" to "The Anatomy of a Hollywood Fiasco." Probably an indication that this film had been largely forgotten by 2002.) The reprint edition has an afterword that briefly discusses the reception of the book -- Bruce Willis was livid -- and the impact of the film on the careers of De Palma and the other people who are the focus of the book. Unfortunately, the photos from the first edition are not reproduced and the quality of the printing is a little off. Whatever reproduction technique was used imparted a bit of waviness to many of the lines of text.

No better book to describe how a movie is produced

Published by Thriftbooks.com User , 16 years ago
The Devil's Candy is the story of the making of The Bonfire of the Vanities. It is the best (and possible only) book in recent times to describe how a movie is made, in depth, from inception to casting to production to editing to screenings and focus groups through release and box office. The subtitle, "The Anatomy of a Hollywood Fiasco" is misleading. This is not a book that analyses why a movie production went wrong. It is a journalistic look at how a movie is made, any movie, and this book uses the example of the Bonfire of the Vanities because that happened to be the production Julie Salamon was invited to observe from beginning to end. Tellingly, the original version of the book was subtitled instead "Bonfire of the Vanities Goes to Hollywood" and the new subtitle was obviously added for the paperback version to try to pump up sales. Most of the other reviews have said this book is for industry insiders, but it isn't. For insiders, there is nothing new here. This book is for people on the outside who want to know how the movie industry works. And what we learn is that for all the glamour, movie production is mostly meetings and sitting around sets doing endless takes of scenes that eventually get cut. Assuming you're interested in learning how Hollywood works, from the endless scouting of locations to who is responsible for carrying the director's thermos of coffee, you will be educated. This book, at more than 400 pages, goes into gory detail, from just about everyone's point of view, from the director to costume manager. It's written as you would expect from a journalist on the banking desk at the Wall Street Journal (before she became the movie critic) - straightforward, inclusive, and accurate, not the breathless style with plenty of italics and exclamation points characteristic of showbiz books. But it is also the weakness of the book. There is too much detail that isn't important, too much describing the color of every carpet in every room visited, what kind of shoes everyone wears, and who is holding De Palma's coffee thermos at at every moment, too many people's points of view to keep the narrative flowing. Overall, if you're looking for a juicy, fast flowing story about Hollywood disaster, you will be entirely disappointed. However, if you want a textbook on how a movie gets made, want to learn how Hollywood really works, this is *the* book.

Students of the Industry Only

Published by Thriftbooks.com User , 18 years ago
This is an exceptional documentary analysis of what goes on in the making of a film. The author, Julie Salamon, was given the opportunity to follow Brian De Palma for the total duration of a very difficult film project, Bonfire of the Vanities, the remake of the famous Tom Wolfe novel. It is an exceptional replay of everything that happened from original purchase of the rights to the novel, to the publicity and reviews of the famous movie, to the ultimate collapse at the box office. One only wonders how this book would have read had the movie been a success.While I really enjoyed this book, I would not recommend this book to anyone that does not have an intense interest in Hollywood and the making of movies. Excessive time is spent poring over the roles of line producers, second unit directors and production assistants. The book gives you a great understanding not just of the stars but also what it takes to break into the business and what the career path can be. Particularly as it relates to De Palma's assistant looking for an assistant producer credit and the second unit director looking to break out and become a director of his own films. In addition, it does touch on the stars, both actors and director, and how their idiosyncrasies shape the movie and its making.This is not a short book. So if you are looking for an exciting page turner, this is not for you. You will spend many pages following the tale of obtaining rights to shoot at certain locations, tales of screen tests of local judges, and boycotts and publicity by Bronx politicians. Overall, this controversial book detailing separation of the haves and have-nots of the 80s becomes an even more controversial movie with screw-ups in producing of the movie and casting of the roles. But if you want to know what Hollywood is really like and not what just is on the screen, this is the book. You will learn why making movies is so personality driven. For the movie fans, Tom Hanks comes off as the incredible good guy he appears to be. Melanie Griffith and Bruce Willis are not so lucky. But maybe the most interesting personal portrayal is of De Palma. A creature of the 70's decade of the auteur, his portrayal is of a troubled genius that struggles with communication skills. I strongly recommend this book if you have a detailed interest in the business of film. If not, take a pass as it will be too detailed.

Great read if you're curious about the movie business

Published by Thriftbooks.com User , 20 years ago
Julie Salamon was lucky enough to get in at the beginning of what was anticipated to be a great film, and turned out to be one of the biggest critical and financial failures for Warner Bros. The book Bonfire of the Vanities was so popular and written in such a style that taking on the task of adapting it to film was a true challenge and doomed to fail. And fail it did. Salamon also gives a background of the steps it takes to get a picture made from buying the rights of the book to marketing the finished picture. She details the different roles of the movie set, answering the age-old question, "What does a grip do?". You gather a great understanding of how difficult it is to make a picture by studio standards and how the hierarchy on the set works. Fascinating insight from an outsider let into the circus of making a major motion picture. Brian De Palma must curse the day he agreed to let her chronicle the journey. Also, I have to recommend reading Tom Wolfe's Bonfire of the Vanities. You can understand why he wanted no part of making the film adaptaton of his infamous book.

a must read for those interested in the movie business

Published by Thriftbooks.com User , 25 years ago
Julie Salamon's book follows the making of the most anticpated film of 1990 and chronicles the problems, the fights, and the ensuing disppointments. A must read for anyone who wants to know how it really works, Salamon was there every step of the way throughout the pre-production, the filming, and the aftermath. Her descriptions of life on the set are accurate and not glossed over. She was there to give an honest account of a film that was going to be a huge hit but turned into one of the biggest failures Hollywood ever produced. If you are a movie buff, a gossip monger, or a huge fan of Tom Wolfe's book, you must pick this one up...if you can find it
Trustpilot
Copyright © 2022 Thriftbooks.com Terms of Use | Privacy Policy | Do Not Sell My Personal Information | Cookie Preferences | Accessibility Statement
ThriftBooks® and the ThriftBooks® logo are registered trademarks of Thrift Books Global, LLC