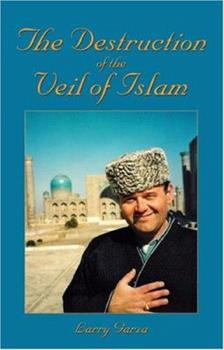 The Destruction of the Veil of Islam

Our entire civilization has become inundated with questions by the global war against Islamic Fundamentalism as a result of the heinous attack on September 11th in New York City. Much like the strike against Pearl Harbor in 1941 we were caught unprepared and uninformed in our conflict with an Oriental religion and culture. In October of 2001 Larry Garza was asked by his congressman to prepare a paper for The Foreign Relations Committee and the President...

You discover facts and truth from often expensive experience

Published by Thriftbooks.com User , 17 years ago
Larry Garza's book describe his risky and expensive experiences with Far East, Middle East and South East Asian cultures, religions and civilization. Coming from Nigeria, I know and have seen what misguided fundamentalist Muslims have done in wrecking havoc to that country, especially, Northern Nigeria. The stories and experiences of Mr. Garza accurately portray Islamic beliefs and the truth about Islam that needs to be known. While in the USA, we have room for everyone because of democracy, freedom of religion, tolerance and inclusiveness. However, our Government and peoples must exercise caution in not allowing Islamic fundamentalists a foothold or the introduction of Sharia Laws as in some Northern States of Nigeria. Many of the Islamic leaders secretly like Western Civilization and freedoms, yet they continue to repress their people and disallow freedom of religion in their domains such as Northern Nigeria, Iran or Saudi Arabia. Mr. Garza's personal experiences of several Eastern Religions, historical accounts from Islamic countries he visited decribe a transformed man with geniune Christian love for all peoples. I highly recommend his book (The Destruction of the Veil of Islam) if you really want to know the facts about Islam and it's violent dispositions.

Revealing the truth about Islam

Published by Thriftbooks.com User , 17 years ago
This truly is an incredible account of a human life. Larry Garza reports his life testimony, and tells of his travels across Asia. At the same time he dispels any misconceptions about the religion of Islam. He relies on the FACTS not on personal opinion, which lends this book credibility. Through this work, I have come into a greater understanding of the misunderstood religion. There is a reason why this book is called "The Destruction of the Veil of Islam". A truly fascinating and captivating book. Larry Garza is a hero of Democracy. I promise that you won't be disappointed if you invest in this masterpiece of historical Literature.

MUST READ FOR ALL WHO WANT OBJECTIVE TRUTH

Published by Thriftbooks.com User , 17 years ago
This is truly one of the greatest writings of our time. This book is a combination of both thrilling accounts of the authors journeys into forbidden lands and eye opening truths about Islam,its history, foundational teachings from its founder Mohamed and its agenda in the world today. This is a must read, the most captivating book I have ever read.

A Wake-Up Call To All Nominal Chrisitans

Published by Thriftbooks.com User , 17 years ago
I found the account told by Mr. Garza to be accurate and compelling. Anyone interested in learning more about Christianity as a 'practiced' belief and the desire of the Islamic world to resist the Christian ideal of democracy, will enjoy this front-line account. It appears to me he is one of the true doers out there - pushing forward, using peace and love as his motivation. I saw the author on the O'Reilly Factor January 4th and found his historical knowledge to be consistent with the context of his book.
Trustpilot
Copyright © 2022 Thriftbooks.com Terms of Use | Privacy Policy | Do Not Sell My Personal Information | Accessibility Statement
ThriftBooks® and the ThriftBooks® logo are registered trademarks of Thrift Books Global, LLC