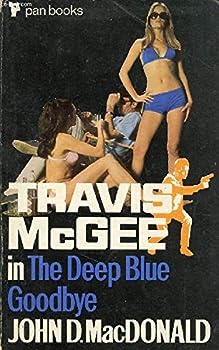 (Book #1 in the Travis McGee Series)

From a beloved master of crime fiction, The Deep Blue Good-by is one of many classic novels featuring Travis McGee, the hard-boiled detective who lives on a houseboat. Travis McGee is a self-described... This description may be from another edition of this product.

Published by Thriftbooks.com User , 16 years ago
Got started with the Travis McGee series 20 years ago. Didn't read them in order, but suggest others do. My favorite is The Green Ripper, and thought the only one a little lacking was Freefall in Crimson. But just want to say, when you finish all the McGees, go immediately to his other novels and short stories. Some are clunkers-- Man of Affairs, Border Island-- but some are unbelievably great novels of the crime/"pulp fiction" genre. The Empty Trap; April Evil; On the Run; The Girl, the Gold Watch and Everything; Linda (found in Border Town Girl), and on and on and on. Also short stories-- Good Old Stuff, More Good Old Stuff (Seven not as good) and the sci-fi-- yes, that's right-- sci-fi stories from very early in his career are in a collection, too. They're hit and miss, but mostly hit. For me, MacDonald and Steinbeck capture so much about this country.

Color him McGee in this 'must read'!

Published by Thriftbooks.com User , 18 years ago
"Home is the `Busted Flush,' 52-foot barge-type houseboat, Slip F-18, Bahia Mar,Lauderdale." Is there any address in American literature so readily identified? Probably not.It's the home of Travis McGee, "knight in tarnished armor," and central character of theover-20 volumed series by John D. MacDonald. With quite a following of readers around the world (my first McGee was whilevacationing in Torremolinas years ago and needing something to read while soaking up theSpanish sunshine and absorbing the sangria deliciosa!), MacDonald's hero, along with hissometimes bizarre assortment of friends, enemies, and hangers-on, goes from one adventureto another. Each of the McGee books contains a color in the title, easily recognizable. Andit's not purple prose either! MacDonald, a best-selling novelist for years, has more thanjust a storyline to carry his books.Certainly, McGee is his principal concern. He's "retired" most of the time--he only goes back to work when he sees he's running out of money. He'd rather stay aboardhis houseboat and entertain his friends that work. He claims he's taking his retirement oneday at a time! "The Deep Blue Good-by" is the first in this series, published in 1964. It is amazing,too, that in reading it here in the year 2000, the book still stands as relevant now as it wasthen. McGee, as usual, finds himself befriending and then helping out Cathy Kerr, whohas come to him in desperation. Her misfortune has been to meet up with Junior Allen, "asmiling, freckle-face stranger" with depravity on his mind and a more odious person youdon't want to meet. There is also something about missing inheritance. McGee is unableto resist and from the moment he accepts the challenge, the reader is glued to the pages. MacDonald's style is terse (some would say Hemingwayesque--one of MacDonald's favoritewrites, incidentally) and moves rapidly, a pace easy to keep up with but one that if youblink, you might miss something. But who wants to blink when MacDonald is on a McGee crusade! The author's knack for piercing characterization, his ability tocapture the landscape and atmosphere of "Lauderdamndale," and his penchant for a goodstory make this first episode one not to be missed. True, the McGee books ordinarily don'thave to be read in sequence, it's still a good idea. Over the course of the series, naturally,an affinity toward complete understanding of Travis, and his good friend Meyer, keepsreaders truly involved. "The Deep Blue Good-by" is a "hello" to a great series!

The 1st in the Travis McGee Series

Published by Thriftbooks.com User , 20 years ago
This was the first in the beloved Travis McGee series. Buy Deep Blue Goodbye. Then buy Nightmare in Pink. Now you are on your way to reading one of the best book series ever written. John D. Macdonald is my favorite fiction author for many reasons: his social commentary, characters, storylines, ... Deep Blue Goodbye gives much, and leaves you wanting more. Thank goodness there are so many good works by this author.But don't take my word for it. Read the entire T. McGee series!

Published by Thriftbooks.com User , 22 years ago
After reading all of John D. MacDonald's Travis McGee books, I would say that The Deep Blue Good-By is the best way to meet the greatest character of the detective-story genre. Imagine the best qualities of Hammett's Continental Detective Agency Operative and Sam Spade, Chandler's Philip Marlowe, and Cussler's Dirk Pitt combined with a unique personality that is impossible not to love. MacDonald's characterization is unmatched in almost all authors I have read, and his story-telling skills are amazing. But most impressive are his social commentaries voiced by McGee in interior monologue; nearly all the nigh-cynical observations voiced by Mcgee were true in MacDonald's time as well as ours. If you love a good story, regardless of whether or not you like mysteries, you will love this book. One word of caution, though-- once you read this, you will be hopelessly addicted to the world of Travis Mcgee.

A Master of Suspense creates a hero for the ages

Published by Thriftbooks.com User , 23 years ago
Sit back and relax. Start at page 1 and take the ride of your life with Travis McGee. This first book in the series is an excellent starting point for first-timers because all the ingredients for the McGee stories are here-a lady in distress, a stolen "treasure", and a brutal unrelenting villain. MacDonald had a talent for involving you so deeply that you find yourself going back to re-read passages that hit you hard the first time. Junior Allen is a perfect villain--A force of nature motivated by greed with an ever-deepening bent towards sexual brutality. This book contains storytelling so vivid that you feel the punches with McGee. This book, along with Donald Hamilton's Death of a Citizen, is the perfect example of the 50s-60s Fawcett Originals.
Trustpilot
Copyright © 2022 Thriftbooks.com Terms of Use | Privacy Policy | Do Not Sell My Personal Information | Accessibility Statement
ThriftBooks® and the ThriftBooks® logo are registered trademarks of Thrift Books Global, LLC