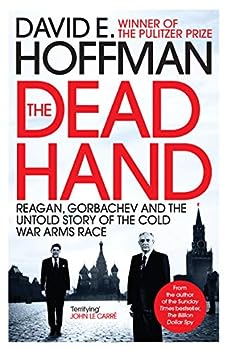 The Dead Hand: Reagan, Gorbachev and the Untold Story of the Cold War Arms Race

WINNER OF THE PULITZER PRIZE The first full account of how the Cold War arms race finally came to a close, this riveting narrative history sheds new light on the people who struggled to end this era... This description may be from another edition of this product.

We're lucky to be alive

Published by Thriftbooks.com User , 12 years ago
I bought "The Dead Hand" because for many years I believed there was more to the "Cold War" and its "end" than what we were taught or told. To be honest, I never bought into the hypothesis that President Reagan's massive build up of the military and zest for "Star Wars" was the "cause" of the dissolution of the Soviet "evil empire". My more "I-obviously-watched-too-many-movies" side of me even thought that Gorbachev and Yeltsin would turn out to be CIA plants in what would have been the greatest single covert operation in human history. I just couldn't believe the Soviet "ending", which came on like a locomotive, could have been chalked up to death by natural causes with American military might to speed death along. No, this State had a fast-moving cancer put there by the Americans, on the inside. Well my fantasies will remain relegated to the Fiction section, but Hoffman did proceed to scare the daylights out of me with what he revealed. I won't spoil the many "a-ha's" so cleverly researched and reported on by Hoffman, but I will say that when I finished the book I shook my head in utter disbelief that the two superpowers didn't manage to destroy humanity. The scarier part is that it is possible a serious WMD threat still exists, especially in the so-called "rogue" states: Iran, North Korea, etc. OK, a little peek: given the laughable state of security around the Soviet's weapons of mass destruction at Cold War's end, even an optimist is left to conclude that the likelihood that an WMD will be used in our lifetime is inevitable, since accountability was a joke and incentives to sellout high. Hoffman's recount of Cold War history is riveting, revealing and even revolting. I fought sleep to keep reading. Several times I was jolted by the book hitting my forehead but instead of entering eye-lid theatre, I would press on. The Dead Hand is that good. But like a curious lad who just has to see what really happens in an X-rated movie, you finish the book not sure you wanted to know the truth. The boogie man is really out there.

Excellent insights into the Cold War.

Published by Thriftbooks.com User , 12 years ago
Superb research into the events that swirled around the Cold War between the USSR and the USA. Interestingly, Gorbachev is painted as the person desperately trying to lessen the possibility of nuclear war, while Reagan is shown to be indecisive and vascillating. Also, the history of the period shows that Reagan cannot take credit for the dismantling of the Berlin Wall, regardless of what his supporters contend. Author spends too much time discussing Chernobyl and germ warfare, in my opinion. But the rest of the book is excellent.

A Huge story; an important book

Published by Thriftbooks.com User , 12 years ago
This is an astonishing book. It is a reporter's triumph; it tells an important and (as far as I know) absolutely unknown story. It is also suspenseful and well-written; John LeCarre's endorsement on the back on the book is well deserved. David Hoffman is a longtime colleague on The Washington Post, but I do not think I'm overrating his book out of friendship. The story it tells is roughly this: immediately after signing a treaty banning chemical and biological weapons in 1972, the Soviet Union set about building a new, secret, and very extensive biological weapons capability. They were successful; they created frightful new weapons (a chemical weapons program was added later). Amazingly, Hoffman interviewed and has documents from scientists who led the program. The persistence (and language skills) required to get hold of these documents and conduct these interviews won't come along again soon. The weapons included anthrax, smallpox and plague and many more. Much of this was recovered by a ragtag team of American diplomats and scientists during the Yeltsin years. Was all of it? Probably not. (One of Hoffman's sources was recruited to teach at a university in Iran and says that many of his colleagues went there as well). While this story unfolds, Hoffman tells the more familiar story of Gorbachev, Yeltsin, and the unraveling of communism. He also chronicles the Soviet-US interactions in the Reagan and George H.W. Bush years, in wonderful detail and including much new data gleaned from US and Soviet negotiators. The book is a combination of diplomatic history, suspense story, and completely original reporting. I cannot recommend it too highly.

Published by Thriftbooks.com User , 12 years ago
The Cold War was mainly an ideological war.Threats of mutual destruction played a significant part during this conflict.Suffice it to mention the Berlin crises and the Cuban Missile Crisis,where humanity has almost annihiltated itself.Brinkmanship was the name of the game ,played in many instances by the Soviet empire. "The Dead Hand" shows to what extent all of us were living in the most dangerous period of times during the second half of the twentieth century.Its focus is to show two important and cardinal points:to what extent missiles were to make sure nobody would be alive in case the conflict grew into a hot one.The second point emphasizes and demonstrates an angle which did not get much attention by Cold War historians:the threat of biological warfare.The combination of these two destructive forces would have made Hiroshima a child's play. As Mr.Hoffman makes it clear in his riveting and breathtaking book,it would have been a matter of only some minutes when humanity could have destroyed itself.This is a story that includes presidents, advisors,soldiers,(evil)scientists,generals and spies who were working for their respective peoples in order to gain the upper hand. For the first time, we get an in-depth story about the Soviets' biological weapons program.The purpose of the Soviets was to create a genetically-engineered super-germ which would cause hundreds of millions of fatalities.He includes the story of some scientists who were working on this secret project day and night. This is his best and most fascinating part of the story.He includes stories about some scientists who could not live with lies anymore, thus they defected to the West and told the whole story about how the Russians were trying to fool the world about their intentions on biowarfare.Included are special photos about those who took part in this evil plan. There is a special chapter about "The Year of the Spy",i.e 1985, where spies from both sides traded secrets and betrayed each other. Hoffman also describes in great detail the way Gorbachev and Reagan came both to the conclusion that spending billions upon billions of dollars on mass-destruction weapons was an act of stupidity, although it took the Soviets a lot of years to come to this conclusion. I do not recall another book where the exchange of opinions and ideas between Gorbachev and Reagan is so detailed ,documented and well- analyzed. Tens of personalities and scientists from both sides were interviewed for this book.It shows many new insights into Reagan,Gorbachev and their assistants.There is a special chapter about the way the Russians asked the Americans to assist them financially in order to destroy their weapons and nuclear bombs and warheads.Senator Sam Nunn did whatever he could in this respect in order to persuade the Congress to give 1 billion dollars for this purpose, but he did not have much success. In the end, the collapse of the Soviet Union marked the end of failed ideology,"hypermilitarizatio
Copyright © 2022 Thriftbooks.com Terms of Use | Privacy Policy | Do Not Sell My Personal Information | Accessibility Statement
ThriftBooks® and the ThriftBooks® logo are registered trademarks of Thrift Books Global, LLC