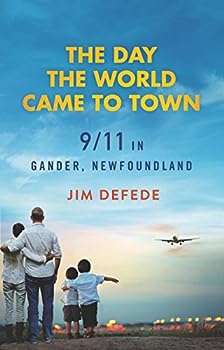 The Day the World Came to Town: 9/11 in Gander, Newfoundland

The True Story Behind the Events on 9/11 that Inspired Broadway's Smash Hit Musical Come from Away, Featuring All New Material from the AuthorWhen 38 jetliners bound for the United States were forced... This description may be from another edition of this product.

Published by Thriftbooks.com User , 19 years ago
It took me a while to get around to reading this book, because, by the time it came out, I was over-saturated with 9/11 materials. But this is a very different type of story from those about Ground Zero. When the United States shut down its airspace and diverted all those planes elsewhere, 38 of them ended up in Gander, Newfoundland, a fishing town of about 10,000. The reason was simple: Gander, in spite of its small population today, has an enormous airport. During World War II, American military planes refueled at Gander before heading across the ocean to Europe. Until the invention of the jet engine, Gander was the "biggest gas station in the world," and many planes still stop there to refuel. Physically, Gander Airport could accommodate all those big planes landing, but what about the passengers? That's the real story of Gander -- how the people opened their hearts and homes to total strangers and mobilized every resource they had to comfort and care for the thousands of travelers who suddenly found themselves stranded. It was humanity's finest hour. This book abounds with human interest stories, such as: the fire engine racing to the next town with sirens blaring, to bring back toys for the "plane children"; the animal protection volunteers who crawled into the bellies of the grounded planes to rescue and care for the passengers' pets; the American family returning from Kazakhstan with a newly-adopted daughter; the big party for the four kids with birthdays that week... and many, many more. I was especially pleased to read about Rabbi Sudak, the Orthodox Jew (Lubovitcher Hasid, actually) stranded in Gander, who set up a small kosher kitchen and ministered to other stranded Jews, as well as curious locals and a "secret Jew" who lived in the area and "came out" to the rabbi. I was aware of this story because I had read about it in a Jewish newspaper but, in all the TV coverage of Gander, I never heard the rabbi mentioned once. In fact, there was a total lack of coverage of Jewish chaplains anywhere during the mainstream 9/11 coverage. This annoyed me to no end, because I KNEW that rabbis and lay Jewish workers were ministering during the 9/11 efforts, the same as their Christian counterparts. So it was very heartening to see this story included among the many tales of courage and caring. On the technical end, the book is well-written. The author, Jim Defede, is an excellent storyteller. In the course of writing the book, he interviewed over 180 people. From these, he chose a few representative stories to follow through the entire six days of the crisis. At the same time, he paints the bigger picture very well, so that we can see how the whole town of Gander -- as well as several other towns in the area -- were part of it. He also weaves in cultural and historical background about the area, such as the history of the airport mentioned above. (Which, by the way, answered my own questions about why all those planes were sen

Gives you something to feel good about

Published by Thriftbooks.com User , 20 years ago
Living just 5 miles from Ground Zero I haven't felt the urge to read any of the many books chronicling the events of that horrible day. On a strong recomendation from a friend I picked up THE DAY THE WORLD CAME TO TOWN. Yes this story will bring tears to your eyes but they will quickly be replaced by sheer awe at a community that, without a moment's hesitation, opened its heart and its doors to complete strangers.If this story was written as ficton one would accuse the author of an overactive imagination. The people of Gander and it's neighboring communities jumped at the chance to render hospitality and comfort to the "plane people", as they referred to them. This story takes the reader through the full range of human emotions from tears to laughter. Yes, laughter. I want to go to GAnder myself and just hug everyone I see.If you read one September 11th book, make it this one. It provides a lesson we all could learn about being a good neighbor.

A different story about 9/11

Published by Thriftbooks.com User , 20 years ago
This book uncovers a more or less unknown story of the events of 9/11.For me personally this story is very true. I was one of the passengers that had to divert to Gander, and as soon as the book arrived, I've read the book within one day. I just could not stop. Never before was I so emotionally touched by a book. Maybe because this book is about "us", who landed in Gander. I don't know. I have learned things from the book, which most of the passengers did not know before. It is just amazing how everything got organized by the citizens of Gander and surrounding communities with the support of the Salvation Army.Jim DeFede picks a few passengers who were aboard different airliners and re-tells their story. I do have my own story (as probably every passenger who was stranded in Gander), and it is interesting to see how other people lived through the week after 9/11 in Newfoundland.If you want to know about a different story of 9/11, read this book, and you will be amazed how people were helping complete strangers that were caught in the tragic events.

Makes me want to be a 'Newfie'

Published by Thriftbooks.com User , 20 years ago
It's hard to believe that anything written about the events of September 11, 2001, could be described as `wonderful' but Miami Herald columnist Jim DeFede has penned a book that is all that and more. `The Day the World Came to Town: 9/11 in Gander, Newfoundland' describes what happened when more than 250 aircraft, prohibited from entering U.S. airspace due to the terrorist attacks, were diverted to Canadian airports. Of those, 38 planes bearing 6,595 passengers landed in Gander, Newfoundland, a town with a population of barely 10,000. What happened next goes a very long way to restore the faith in humanity that was shaken by the terrorists. Without exception, the residents of Gander (They call themselves `Newfies') opened their doors to welcome the unexpected refugees and poured out such warmth and compassion that one passenger later remarked, "I was on a flight from London to New York and landed in Heaven."Schools were closed to provide space for shelters. Residents took the sheets and blankets off their own beds to deliver to the passengers and stayed up all night to feed and welcome then when they finally were able to get off the planes. Locals approached `plane people' in the street and invited them into their homes to shower. Pharmacists made thousands of calls worldwide to verify prescriptions and then filled them for free. Shop owners gave away their stock to those in need and, when they ran out, bought more from the competition and gave that away as well. The events described in this book will make you either proud to be a Canadian or regretful that you aren't. DeFede skillfully blends the tragic and the comic. One moment Gander's residents are compassionately providing around-the-clock care and companionship to the mother of a missing New York firefighter. Meanwhile, other locals are making honorary Newfoundlanders out of several passengers by means of an age-old ceremony involving kissing a codfish and drinking the local liquor whose name, Screech, is apparently an apt description of its flavor. There's even a little karma thrown in. When the principal of the Lewisporte Middle School allows a passenger to use their computer center to `run a small business' she doesn't discover until later that the passenger's name was Gordon Conway and the `small business' that he was running out of her school was the Rockefeller Foundation. Needless to say, her generosity resulted in a new computer center for her students. After the end of their involuntary visit to Gander, many of the passengers have since returned to Gander to visit and express their appreciation to those who were so kind and generous to them. I, too, plan to visit Gander someday, if for no other reason than to see what kind of people it takes to shine such a bright light on one of the darkest days in our history. I'd also like to find out what Screech tastes like.

The Day the World Came to Town: 9/11 in Gander, Newfoundland

Published by Thriftbooks.com User , 20 years ago
I work across the street from "GROUND ZERO" and like a moth to a flame have been attracted to every book and documentary chronicling 9/11. It has been a very sad literary experience as you can well imagine. When I picked up this book I expected much the same. I was so wrong. This book gave me and will give you the much needed boost when remembering that awful day. I was immediately captured by such humanity that I believed as a Native New Yorker no longer existed. The people of Gander NewFoundland are a true rare breed. They didn't just sympathize with the plight of the American people during this crisis they became self proclaimed Americans. These NewFoundlanders gave the world an incredible example to follow. The book is so well written that I finished the book feeling as if I knew each and everyone personally. I read this book on the verge of such a horrible anniversary that I'm oddly hoping for a follow up to this story on each anniversary. The stories of each person stranded in Gander will undoubtedly strike a chord with all of us. Enjoy it I did!!
Trustpilot
Copyright © 2022 Thriftbooks.com Terms of Use | Privacy Policy | Do Not Sell My Personal Information | Cookie Preferences | Accessibility Statement
ThriftBooks® and the ThriftBooks® logo are registered trademarks of Thrift Books Global, LLC